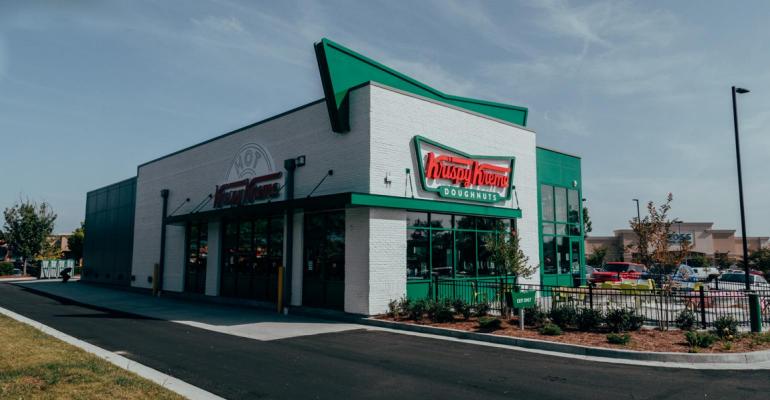 Krispy Kreme
The chain has been growing using a hub-and-spoke model to increase points of access beyond the doughnut shops.
News>Quick Service

Meanwhile, Andrew Skehan, president of North America, to step down in August

Josh Charlesworth has been promoted to the role of global president and chief operating officer at Krispy Kreme, the company said Wednesday.

Previously serving as the doughnut chain’s chief financial officer since April 2017 and COO since May 2019, Charlesworth will continue on as CFO as the company searches for a replacement for that position.

Related: How Krispy Kreme plans to become the most beloved sweet treat brand in the world

In addition, the company said Andrew Skehan, president of North America for Krispy Kreme, plans to step down in August to accept a CEO position at another organization. The company did not say where.

As global president, Charlesworth will be responsible for Krispy Kreme’s core equity markets, including the U.S., the United Kingdom, Ireland, Australia, New Zealand and Mexico, the company said. He will also oversee the expansion of the company’s global footprint. Currently, Krispy Kreme operates in about 30 countries.

“We are pleased to elevate Josh to this key leadership role to oversee our sustained growth of Krispy Kreme. Throughout his five years here, Josh has proven to be essential to our success as a company and I look forward to working with him on leading our core equity markets,” said Mike Tattersfield, Krispy Kreme’s president and CEO, in a statement. “We have tremendous confidence in Josh’s capabilities to continue to execute on our transformation plan, grow our global fresh point of access utilizing our hub-and-spoke model, and build our beloved brand around the globe.”

Krispy Kreme went public last year, but Europe-based conglomerate JAB Holding Co. remains a significant shareholder. The chain has been growing its omnichannel points of access, expanding its shops as hubs that can serve fresh doughnuts to other outlets, including grocery and convenience stores, along with ecommerce and delivery.