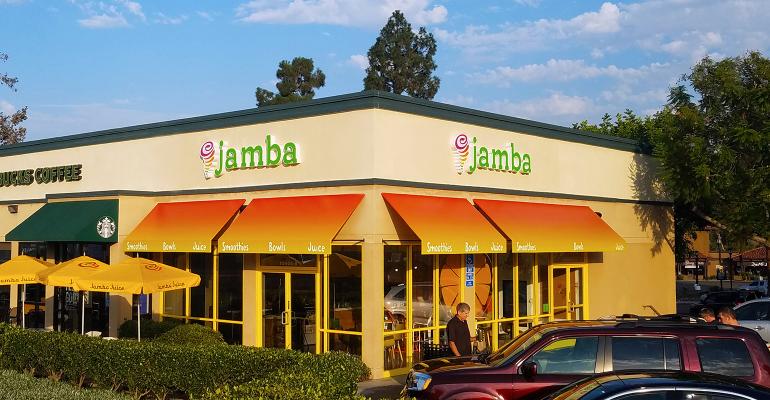 Jamba charts development as it catches up on financial filings

Jamba Inc. is looking to open more contemporary drive-thru format versions of its juice-and-smoothie brand as it works to regain compliance with Nasdaq financial reporting rules, the chief executive said.

“We’re pretty bullish right now,” said Dave Pace, Jamba CEO, in an interview Friday, as the company said it was working with a Nasdaq Hearings Panel to regain compliance and avoid delisting on the stock exchange because of delinquent quarterly and other filings. Pace said Jamba was intent on getting back into full compliance. “We still have to finish our 2017 K and our annual shareholder meeting, rolling 2016 and 2017 together,” he explained.  “My internal target is to be back on regular cadence by summer.”

In seeking an extension from the Nasdaq panel in September, Jamba said it was delayed in completing financial statements because of “significant changes in the company’s business model, leadership and key personnel” and the relocation of its corporate office in 2016. Jamba Inc. moved its headquarters from Emeryville, Calif., to Frisco, Texas, a suburb north of Dallas.

“We were a very California-centric business, and we think the opportunity is outside,” Pace said Friday. “We moved to Dallas to be more centrally located.”

Jamba’s strategy includes new territories in Colorado, Kansas, Nebraska, New Mexico, Oklahoma and Texas, as well as on the Eastern Seaboard from New York to Florida.

Jamba is also more open to single-unit development than in the past, Pace said. “Historically, we’ve been focused on larger, well-capitalized franchisees, and now we are looking at single operators,” he said. Jamba currently has about 900 units in 30 states, with 70 of those international and 52 of those company owned, mostly in California. Jamba opened 40 new domestic stores in 2017 and committed to an “asset-light” franchising model.

Four of the Jamba units opened in 2017 had drive-thrus, said Josh Nicosia, Jamba’s general counsel and vice president of development, and 25 percent of store openings this year will feature them.

The company’s first drive-thru opened in California in 2016. “Landlords do want to work with us, and they have been receptive to us with carving up some of the spaces,” Nicosia said. “It just takes a little longer to find the right location.”

“We’re going through a process where we’re closing some of the lower AUV units as we work through the system,” he said. “There are a bunch of legacy units out there that we’re not comfortable with, so we’ve been cleaning them up as we go.”

“The consumers really like the look and feel,” Pace said, adding that it was more of a place to sit and stay.

The company is also testing delivery and catering.

“Catering is a different presentation,” Pace said of a test in San Diego. “We do what we call a Bowl Bar, which is a basically a large size bowl of a smoothie base with different toppings where you can create your own bowl.” Toppings include granola or fruit, and the platform is aimed at business meetings and conferences.

Jamba is also marketing to seasonality, with a promotion starting March 29 based on mango, which is the brand’s most popular flavor, Pace said. Mango-A-Go-Go will be the centerpiece of the three-item promotion, along with a mango bowl and a mango smoothie made with Greek yogurt and topped with chia pudding. The “Mango Power Players” promotion will last about 10 weeks, Pace said.

“It scored really well and targeted to the health-conscious consumer,” Pace said. “The consumer in this category gets more sophisticated every day. They are becoming much more knowledgeable.”

Consumers have grown more accustomed to the healthful offerings since Jamba was found in 1995, so the company is adding options like turmeric and wheat-grass shots, Pace said. The average Jamba per-person transaction is about $8.25.

In the most recent Securities and Exchange Commission filing for fiscal year 2016, Jamba reported a net loss of about $22.4 million compared to a net income of $9.4 million in the prior year.

The company said expenses included the headquarters move and the termination of the JambaGo platform.