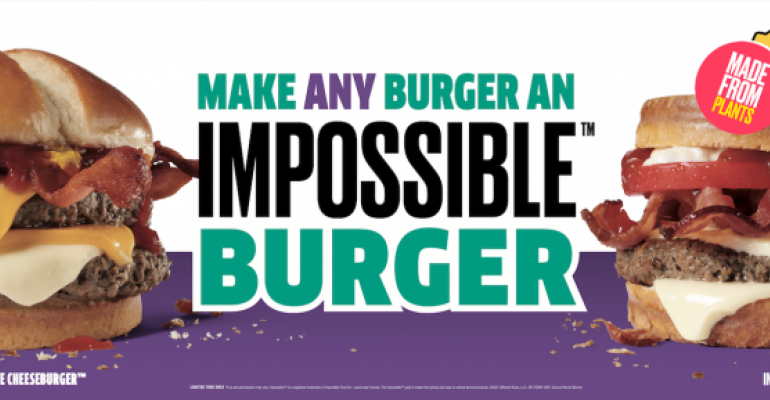 Jack in the Box is offering patties made with Impossible Burger in participating restaurants in Phoenix.
News>Quick Service

Jack in the Box tests Impossible Burger in Phoenix

Quick-service chain to offer the meatless burger at participating locations through Dec. 12

Jack in the Box is the latest large quick-service chain to test a meatless burger.

The San Diego, Calif.-based chain of around 2,200 restaurants started testing a plant-based burger made by Impossible Foods at participating locations in Phoenix on Monday.

Guests can swap in a patty made primarily of soy and potato proteins — as well as coconut oil, sunflower oil and heme protein— instead of the usual beef patty for between $1 and $1.50 per patty, a representative of the parent company said.

The test will be in effect through Dec. 12.

“We’re excited to test the Impossible Burger patty at our Phoenix locations,” Jack in the Box chief marketing officer Ryan Ostrom said in a release announcing the test. “We feel it is important to give our guests as many options to choose from as possible, because Jack in the Box is all about menu variety and satisfying all types of cravings.”

“Our consumer insights [studies] show our guests are interested in plant-based options and we want to give them as many ways to enjoy our products as possible,” he added.

“We're thrilled that an iconic brand like Jack in the Box would choose Impossible Burger for its menu," Impossible Foods president Dennis Woodside said in the release. "More and more, meat eaters are looking for new ways to enjoy the same foods they know and love while doing something great for the planet. Jack in the Box is delivering on that with a patty that tastes great in every single burger on its core menu.”

The Impossible Burger patty has as much protein as 80% lean ground beef an 0mg of cholesterol, according to Impossible Foods, which says production of its product requires 96% less land and 87% less water than beef. It also results in 89% less greenhouse gas emissions, to company said.

Jack in the Box’s test comes just days after McDonald’s announced plans to test McPlant, a meatless burger made in collaboration with Impossible Foods competitor Beyond Meat, starting Nov. 3 in eight locations in California, Iowa, Louisiana and Texas.

Plant-based burgers are now fairly commonplace at restaurant chains across the country, although the first chain to offer the new meat-analog iterations (as opposed to more traditional veggie burgers) was New York City-based Bareburger, which started offering the Impossible Burger in March of 2017.

Burger King became the first large national chain to roll out a meatless burger in 2019, with the national rollout of the Impossible Whopper.