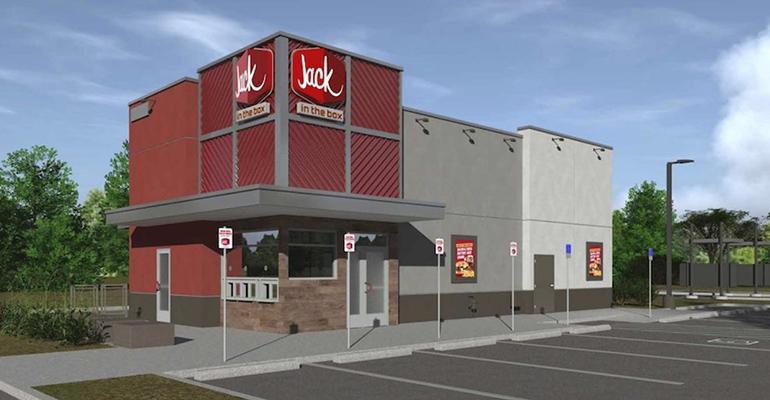 A big red box is a new design element in Jack in the Box's latest prototype.
News>Quick Service

Jack in the Box shared more information about its redesign for existing units and its new off-premises-only prototype in a presentation for investors Tuesday.

The new MK12 model, which CEO Darin Harris discussed in the San Diego-based chain’s most recent earnings call in May, is a modular design that allows franchisees to open drive-thru-only restaurants, as well as a separate lane for online pickup and third-party delivery.

Its modular nature also means it can be used at narrower sites, endcaps and non-traditional location such as airports, convenience stores and college campuses. Its build-out cost is estimated to be 18%-23% lower than that of the current design while allowing for more storage capacity and dual-assembly kitchens,

He said restaurants that had been upgraded with the new design saw sales increases in the high single digits.

“Our goal is to focus on transforming our entire footprint as we are currently finalizing an incentive and investment plan to drive franchise reimages,” he told investors. “It’s a large part of our capital allocation going forward focusing on the drive-thru and exterior of the restaurant.”

He added that featuring Jack would be helpful in attracting customers in new markets as the company expands.

CEO Darin Harris said the chain was planning on seeding new markets with company-owned restaurants, which could result in it temprarily exceeding the 90/10 split between franchised and company units that is his goal.

Ostrom added that the new design focused on “providing a frictionless digital experience for the online, pickup and drive-thru guest.”

“The goal is to provide the ultimate personalized convenience while delivering a back-of-the-house focus on speed, accuracy and reduction of labor hours, and of course with many of our newer stores we’ll maintain our late-night leadership by turning up the purple during evening,” he added, noting that purple has long been the chain’s late-night branding color.

“We are fully going to own the night moving forward,” he said.