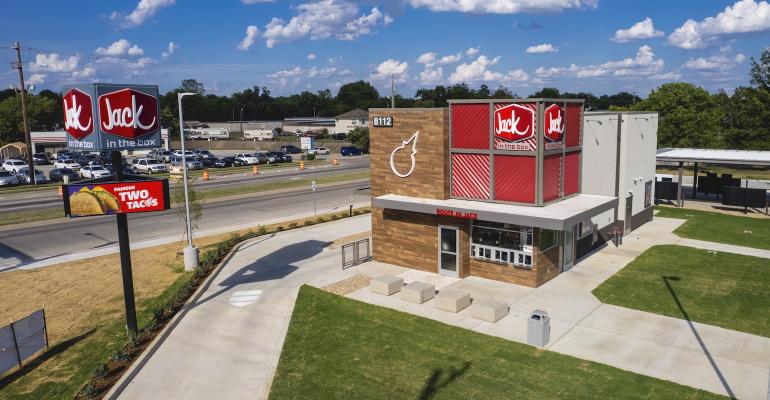 Jack in the Box opens off-premises-only unit in Q4

Jack in the Box Inc. in its fourth quarter introduced a new off-premises-only restaurant prototype in Tulsa, Okla., the company said Tuesday.

“We've made big strides in updating guest touch points with a more modern Jack spin, including our new web and app ordering experience, updated menu boards, team member uniform, packaging and, of course, our new restaurant design for the future,” said Darin Harris, Jack in the Box CEO, on an earnings call with equity analysts after releasing earnings for the fourth quarter ended Oct. 2. Jack in the Box also owns the Del Taco brand.

Related: Jack in the Box overhauls ordering with new website and app

San Diego, Calif.-based Jack in the Box said the new Tulsa 1,350-square-foot prototype was designed to meet the continued demand for drive-thru service and digital ordering. It features a double y-lane drive-thru, a walk-up window for ordering, dual assembly kitchens and a dedicated pick-up window for mobile and third-party delivery orders.

One goal of the new prototype is to reduce buildout costs by around 20%, while also increasing real estate flexibility, the company said. The new model is designed for free-standing locations, but it can be adapted to fit convenience stores, travel plazas and end-cap locations.

Design elements include a “big red box” on the façade that pays homage to the brand’s roots, and exterior lighting that turns to the brand’s signature purple to signify its late-night menu hours.

Part of the new design was aimed at tapping into growing digital sales, executives said.

Harris said digital sales grew more than 32% in 2022, reaching more than $400 million for the year, and now represent more than 10% of the brand’s business.

Drive-thru and in-store guests were recently added to the Jack in the Box Jack Pack loyalty program.

“With Jack and Del Taco digital now representing over $500 million in sales,” Harris said, “we will continue to invest in our digital technology capability plus benefit from the scale and resources of two brands and ultimately enable us to move faster and use more data effectively to drive sales at both brands.”

Harris said the company is working toward reducing operational complexity and drive efficiencies at its brands, citing some specific initiatives.

Company executives said the brand should return to positive unit growth in fiscal 2023.

“Jack in the Box is expected to take its first major step in recognizing our growth potential by turning net unit growth positive for the first time in four years,” Harris said in a statement. “Through rebuilding franchisee relationships, and pairing franchise and company resources to enter new markets in a position of strength, we are starting to see results.”

Jack in the Box will also introduce the brand to customers in two new markets in 2023: Salt Lake City, Utah, with both franchise and company-owned locations; and Louisville, Ky., later in the year.

The company has forecast opening 25 to 30 new restaurants in fiscal 2023.