Jack in the Box to downsize menu, overhaul drive-thrus

Jack in the Box, which is exploring a sale amid criticism from its franchisees, plans to downsize redundant items and invest in drive-thru enhancements to improve operations, company leaders said Thursday during the chain’s quarterly earnings call.

The San Diego-based chain has eliminated several redundant menu items at 150 test stores, which has resulted in fewer mistakes, increased speed of service and a reduction in food waste.

“Franchisees [involved in the test] are pleased on how much easier it is on crews,” CEO Lenny Comma said during the conference call.

Jack in the Box did not say how many items would be scrapped when the systemwide menu reduction goes into effect in July. He said the removal of items has not impacted sales, which for the most part, have remained the same at test stores.

Comma said drive-thrus, which account for 70 percent of sales, will undergo a “major overhaul.”

Jack in the Box will also deploy employees to take orders from customers sitting in cars in the drive-thru line at higher-volume stores. McDonald’s, Chick-fil-A, In-N-Out Burger have also used that method. 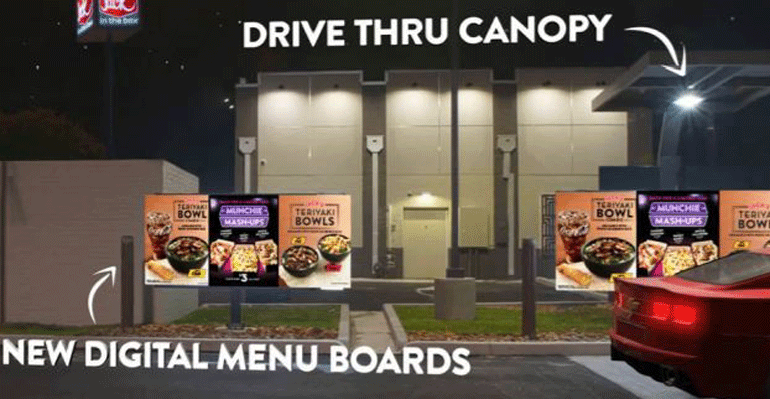 A rendering of a Jack in the Box drive-thru

“Drive-thru enhancement is the No. 1 area of focus for capital investment,” Comma said.

He said 80 percent of restaurants would be touched by the end of fiscal 2021.

The changes were outlined as the burger chain released its first quarter earnings for the period ended Jan. 20. At the start of the call, Comma said the company is still exploring a sale, and declined to address the topic any further.

After getting off to a slow start, Jack in the Box rebounded in the first quarter when the chain pivoted its marketing to a new value meal, the BLT Cheeseburger Combo for $4.99.

Company same store sales increased 0.5 percent, compared to a 0.2-percent increase in the same period a year earlier. The chain said the increase was driven by average check growth of 3.8 percent. Transactions, however, were down 3.3 percent.

“All in all, it was a pretty solid quarter for us,” Comma said.

Comma, who has recently been called an ineffective leader by frustrated franchisees, said he has been on the “road” talking to franchisees, trying to explain how he is positioning the brand for sales growth.

While premium offerings have worked well in the past for Jack in the Box, Comma said consumers are not responding as well because they’ve grown accustomed to deep discounting by rivals.

“Value is probably the No. 1 situation that we’re dealing with,” Comma said. “When you look at who is winning, they are selling a lot of à la carte items cheaply.”

Jack in the Box, however, will not resort to deep discounting, the CEO said: “We believe it is not in the best interests of the long-term health of the brand.”

Instead, he said, the company will continue offer a mix of indulgent items, as well as value meals in the form of bundles.

“We’ve learned that bundled price points are better to be successful,” Comma added. 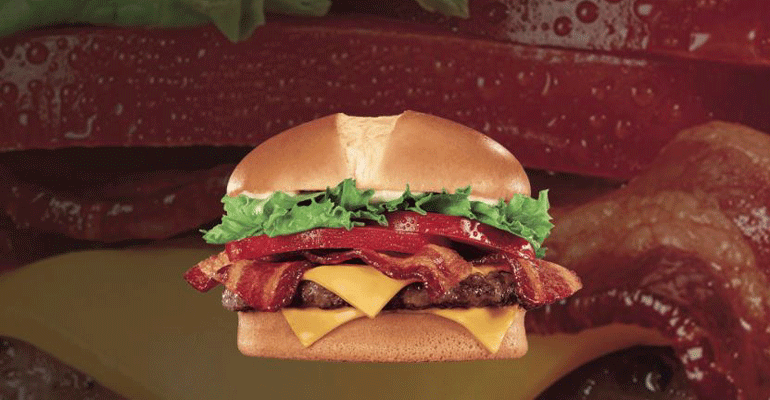 He emphasized that value meals under $5 such as the BLT combo work well for the brand because the main sandwich in the meal is typically new — not a discount of a core item.

BTIG analyst Peter Saleh said he was concerned about Jack in the Box’s same-store sales performance. While performance improved year-over-year, it is lagging when compared to quick-service rivals, whose same-store sales are in the positive single digits.

“The sales improvement seen through the quarter is encouraging given industry conditions, though we believe a less promotional QSR environment will be needed to reverse the relative gap over time,” he said in a research note.

At the end of the quarter, the company had 2,241 restaurants, down from 2,250 in the same period last year.  Of those, 2,104 are franchise locations. Jack in the Box said it plans to open 25 to 35 new restaurants in fiscal 2019, primarily through franchising.