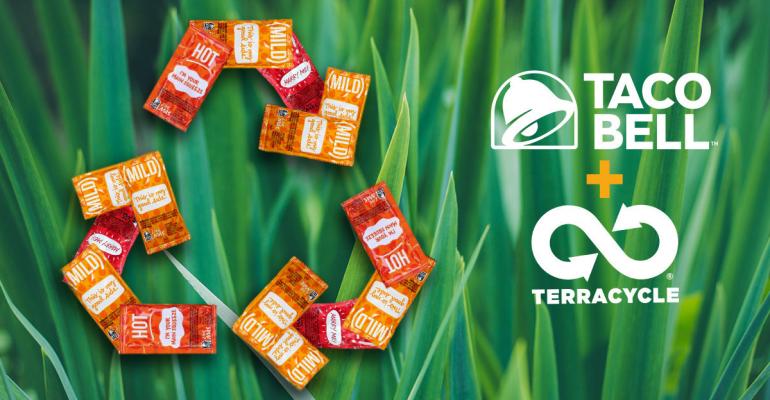 Usually, flexible film packets are not recyclable but Taco Bell is partnering with TerraCycle to give their hot sauce packets a second life

Taco Bell announced Monday that the Yum Brands company would begin recycling its iconic hot sauce packets in partnership with New Jersey-based recycling company TerraCycle. Taco Bell announced that even though 8.2 billion hot sauce packets are used annually, right now they’re not recyclable so they get thrown away instead of reused. The pilot launch for the program will begin later this year.

Although exact details are not yet available, Taco Bell promises that customer participation will be easy and will involve shipping your used hot sauce packets back for free.

"In the food industry today, there is no widely available solution for recycling the flexible film packets that are so commonly used for condiments," Liz Matthews, Taco Bell's global chief food innovation officer said in a statement. "So, we're thrilled to leverage the expertise of TerraCycle to recycle our iconic sauce packet packaging in a way that's as bold and innovative as our menu."

The goal overall is to make all of Taco Bell’s consumer-facing packaging recyclable, compostable, or reusable by 2025, plans that were first announced in January 2020. Other Yum Brands companies, like KFC, have announced similar recycling promises.

TerraCycle is known for melting down traditionally non-recyclable plastics and other materials to turn them into hard plastic items for a “second life” like outdoor furniture and decks, plastic shipping pallets, storage containers flooring tiles, and playground and athletic field materials.

"Now more than ever, consumers don't want to sacrifice the planet no matter how delicious the meal," Tom Szaky, founder and CEO of TerraCycle said in a statement. "Together, Taco Bell and TerraCycle will push the quick service industry by finally finding a way to recycle this type of product. This effort takes us one step closer to keeping packets out of landfills and our mission of 'Eliminating the Idea of Waste.'"