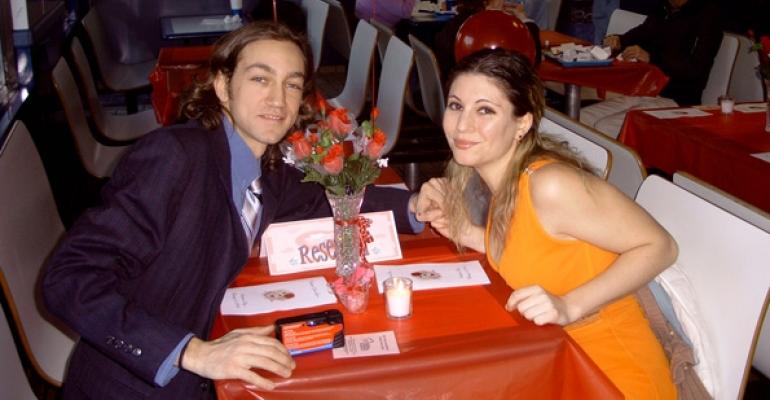 How restaurants can prepare for Valentine’s Day

Operators can plan for two-tops and extra perks to make the most of the busy holiday.

Valentine’s Day falls just a heartbeat behind Mother’s Day among restaurants’ busiest days of the year, and with it comes operational heartaches.

In years past, the National Restaurant Association has estimated that as many as 70 million people will dine out on Valentine’s Day, surpassing No. 3 Father’s Day, No. 4 New Year’s Eve and No. 5 Easter.

The Feb. 14 holiday falls on a Friday this year, raising the potential for a tsunami of love-struck guests, from bastions of high-dollar fine dining to the kitsch of White Castle.

“What’s the saddest day of the year for a restaurant that has all four-tops?” asked Sherri Kimes, Cornell University professor of services operations management, referring to the challenges of accommodating the wave of two-person parties on Valentine’s Day.

“What are you going to do? Tell the next couple that walks in that, ‘There's a lovely couple over there at that table, would you like to join them?’” Kimes said.

Operators can prepare for the onslaught of two-by-two parties, starting by estimating how many two-tops they expect.

“Let's say a restaurateur estimates that about 80 percent of parties on Valentine's Day come as couples,” Kimes explained. “Her restaurant has 200 seats: 80 percent of 200 equals 160 seats should be at two-tops.” Divide 160 by two, she added, and the operator should budget 80 two-tops.

The Valentine’s Day two-top percentage depends on the type of restaurant, Kimes said.

“I’ve seen some fine-dining restaurants where it’s 90 percent [two-tops],” she said, adding with a laugh, “and there are no singles.”

Kimes advised operators to acquire more two-top tables if possible by switching out four-top and larger tables with two-tops rented, borrowed or on hand for the occasion.

“You might have some in the back, or maybe you can borrow some,” she said. “If you don’t have a lot of two-tops and you are taking reservations, you might want to be giving preference to the larger parties if you have the excess demand.”

Tables that allow seating flexibility are crucial to restaurant planning, Kimes said, as other holidays, such as Mother’s Day, pose the opposite challenge of Valentine’s Day: a demand by large parties and bigger tables.

“You can have special Valentine’s Day menus that may be a little pricier, because people want something special,” she said. “You also have the possibilities for add-on sales for flowers or something like that. When the restaurant takes a reservation, it might be worth asking questions about doing extra things. Customers might value that and, of course, would be willing to pay for.”

In 2011 the NRA surveyed member restaurants and found the best guest responses to special menu items, prix fixe menus, celebratory beverages or desserts, flowers or candy, and entertainment or music.

Even quick-service chains can tap into the action. For the past 20 years, 400-unit White Castle has brought romance to its locations by turning them into “Love Castles,” providing tablecloths, candles, tableside service and reservations on Valentine’s Day. Last year, more than 20,000 guests dined at the chain on the holiday.

“We’re already 90-percent full for our reservations this year in our Chicago stores,” Richardson said. “We may have to expand our Valentine’s Day hours.”

White Castle’s program began in St. Louis and Minneapolis and spread to the entire system 10 years ago, Richardson said.

To make reservations, customers call a regional-office phone number, with a team member dedicated to take the reservations, Richardson said. Reservations are relayed to the individual units via email. In recent years, he said, “They [customers] can also email us online.”

White Castle also takes complimentary digital photographs of each party and makes them available through its Facebook page. Restaurants also offer a featured dessert as part of the Valentine’s Day dinner.

“This year, it’s Cheesecake on a Stick,” Richardson said.

White Castle will also host in-store weddings on Valentine’s Day, Richardson said. This year a wedding is planned in each of the brand’s 10 regions. Restaurants continue to accommodate regular walk-in and drive-thru traffic.

The chain is expanding the promotion this year to a two-week “Turn the White Castle Red” fund-raising period before Feb. 14 to raise donations for American Red Cross disaster relief.

Red Cross  president and chief executive Gail J. McGovern and her husband will dine at a Bronx, N.Y., restaurant, where they had their first date 33 years ago, Richardson said.

“Our team members every year share the notion of ‘sharing the love’,” he said.