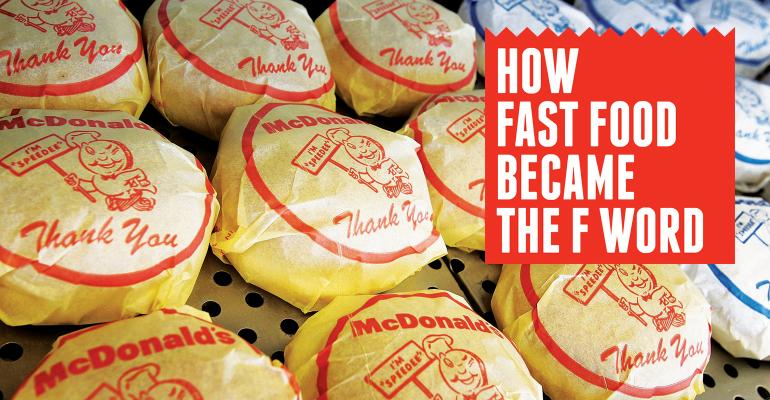 How McDonald’s became the symbol of fast food

As the chain works to improve quality, does its status hold it back?

The golden arches aren’t just a symbol of McDonald’s and its 37,000 global locations. They’re a symbol of fast food itself.

McDonald’s is the biggest restaurant chain and restaurant company in the world, making it a symbol of the post-war shift towards food made quickly, conveniently and consistently at a cheap price.

Related: The rebirth of fast food

McDonald’s status makes it a target for critics and groups looking to influence the restaurant industry. This outside attention forces the company to make changes that perhaps other concepts wouldn’t have to worry about.

Related: The question of healthful

“You’re never going to get away from that image,” said Richard Adams, a former McDonald’s franchisee who also worked in operations for the company, and who is now a consultant.

After all, everybody knows McDonald’s. They know what to expect.

It’s difficult to describe just how big McDonald’s is. Its size is remarkable, given the restaurant industry’s overall diversity and level of competition.

Today, McDonald’s generates about $85 billion in worldwide system sales, nearly twice as much as Louisville, Ky.-based Yum! Brands Inc., which operates KFC, Pizza Hut and Taco Bell. McDonald’s has 37,000 locations, 14,000 of which are in the U.S., dotting the nation’s interstates and urban centers and small town Main Streets.

In the U.S., McDonald’s is bigger than Starbucks Corp., Subway and Pizza Hut. Combined.

The chain’s history dates back to 1948, when brothers Dick and Mac McDonald’ shut down their barbecue chain and opened a drive-in restaurant selling 15-cent burgers. Shake machine salesman Ray Kroc visited the chain six years later, acquired the franchising rights, and the McDonald’s we know was born.

McDonald’s operated 700 locations by the time of its initial public offering in 1965, and it would grow to more than 2,000 units by 1972 — far outpacing rivals like Burger King and the now-defunct Burger Chef.

McDonald’s “began to outrun the other companies,” said John Gordon, a restaurant consultant who used to work with Burger Chef in the 1970s. “I think it was because of company performance. They eclipsed their peers.”

The burger chain’s size makes it a big, frequent target. Advocacy groups put more pressure on McDonald’s than on any other chain in the industry, whether it’s about pay rates for workers or the types of cups used inside the restaurants.

There are good reasons that such groups target McDonald’s: Success in convincing the company to make a change can influence the entire industry.

In 2015, a smattering of companies had made loose commitments to cage-free eggs when McDonald’s agreed to a commitment to using cage-free eggs within a decade. Dozens of restaurant chains and even retailers soon followed suit.

“It was the earthquake that shook the egg industry,” said Matthew Prescott, senior food policy director for the Humane Society of the United States.

McDonald’s grew for a variety of reasons. The company took a position as a low-cost provider. But it also developed a maniacal focus on consistency. Gordon noted that Fred Turner, an early McDonald’s employee who succeeded Ray Kroc as CEO and later was chairman, developed the franchise industry’s first operations manual.

That manual gave this giant company a reputation for mass production.

“We just had the reputation for being the low-cost provider,” Adams said. “The assumption was that meant poor quality.”

To some in the industry, the equating fast food with poor quality isn’t fair. Fast-food chains like McDonald’s built a business on efficiency.

“We call it fast food, but at Fatburger, it takes just as long to cook a burger as it [would to cook] a steak,” said Rensi, who is now chairman of Fatburger parent company FAT Brands Inc.

But the public perception issue wasn’t just quality. The typical McDonald’s meal of a burger, fries and a soft drink has a dearth of vegetables and a high calorie, fat and sodium content. As consumers grew more concerned about obesity, McDonald’s became the obvious place to force change.

In 2004, McDonald’s was the subject of a documentary, “Super Size Me,” in which filmmaker Morgan Spurlock spent a month eating nothing but McDonald’s to ill effect. The company soon removed its Super Size portions from its menu.

The company has also over the years worked to add more healthful items to its menu and kids’ meals — reducing the number of fries while adding options like apple slices and yogurt.

Evidence as to whether the greater foodservice industry has responded in kind is mixed. The arrival of fast-casual chains like Panera Bread Co. and Chipotle Mexican Grill Inc. pushed the industry toward a supply of more sustainable ingredients and healthful options. More chains now are offering vegetarian and vegan options.

And yet some of the hottest chains in the country sell burgers, fries and shakes (Shake Shack Inc., Habit Restaurants Inc.) or fried chicken (Raising Cane’s Chicken Fingers).

“A lot of it comes down choice,” Fatburger CEO Andy Wiederhorn said.

McDonald’s size gives it an immense advantage over its competitors, enabling the company to flood television stations, radios and the internet with advertisements and providing the company resources to make major changes and updates.

The bigger question now is whether McDonald’s reputation as a purveyor of fast, consistent and cheap food will stand in the way of its evolution into a higher quality chain. After all, the company has long struggled to sell higher end burgers or other items because people prefer their cheaper offerings — as prior offerings from the McDLT to the Angus Third Pounder burgers all failed.

Meanwhile, McDonald’s is planning to spend the next few years changing its concept. The company plans to boost its higher end beverage sales and burgers made to order with fresh beef.

It is remodeling restaurants to address many of these changes while adding kiosks and different drive-thrus. And the company has consistently promised further changes to its sourcing.

Getting consumers to change their perception of what McDonald’s is will be a big challenge for the company if that evolution is to work. “I think their marketing expense is going to have to go way up,” to convince customers, Gordon said.

McDonald’s efforts on that front appear to be working. The chain’s same-store sales grew 3.9 percent in the second quarter ended June 30.