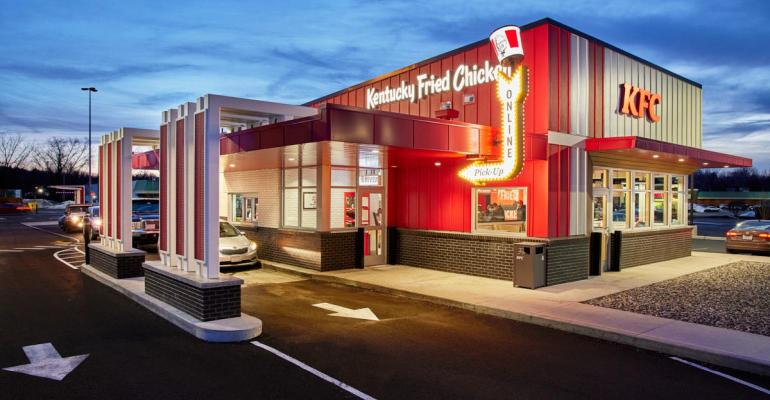 KFC is working to digitize every order and is ramping up consumer-facing and back-of-the-house technologies accordingly.
News>Quick Service

How KFC is working to 'digitize every order'

KFC is testing several technologies around the world to create more consumer access and ease operations.

Sabir Sami was named CEO of KFC nearly one year ago and has since quickly ramped up the chain’s digital capabilities around the globe. Eighty-six percent of KFC’s 24,000-plus restaurants now have order-ahead options, for example.

As such, the digital sales mix for KFC is up 8% year-over-year and the system is just getting started, Sami said during parent company Yum Brands’ investor day Tuesday in New York City. Globally, the digital mix at KFC is now at 40%, yet Yum executives made it clear they would like to get to 100% digital sales mix across all of its brands.

“We want to digitize every order. It’s a better consumer experience and gives us a better ability to understand consumers and predict what they will be buying in the future,” Sami said.

KFC has a unique advantage to cross-market test and learn from the multiple solutions Yum Brands has put into motion, either through acquisitions like Tiktuk or through its own technologies created by the company’s RED Innovation Team. In Thailand, for instance, the chain recently opened its first 100% digital store, where customers can order from the app or kiosks and pick up their food from lockers. More such stores are rolling out around the world “with big results,” according to Sami.

Could this concept eventually translate to the U.S. system? Of course – that’s the advantage of having Yum’s scale. Digital restaurants are not the only opportunity for the chain, however. KFC is also simplifying back-of-house operations by adding solutions such as Bluetooth temperature sensors and is moving to tablets and smartphones to help managers more efficiently do their jobs through a single platform.  A few technologies are “further out,” according to Yum CFO Chris Turner, but have shown early promise in driving performance. For example, the RED Innovation team is focused on vision AI, robotics, conversational AI and Internet of Things (IoT).

“IoT is the furthest along and has been implemented in hundreds of KFC restaurants around the world, reducing administrative time,” Turner said.

What’s providing a real-time opportunity for KFC is its kiosks, which are currently in nearly 4,000 stores around the world, including in the U.S., and rapidly expanding. During Yum’s Q3, KFC’s kiosks made up 6% of the chain’s total sales mix.

“From 2019 to 2022, the mix on kiosks has tripled and we see that rising,” Sami said, adding that kiosks drive ticket growth, better paybacks and more personalized customer experiences.

Perhaps the biggest near-term opportunity for the KFC domestic system, however, is in loyalty. Sami said the chain’s loyalty programs have been “highly successful” around the world, adding, “we expect to roll it out in the U.S. next year.”

Industry-wide, KFC is a bit of a laggard on loyalty, but that won’t likely deter younger, value-seeking consumers who are clamoring for such a program. And, such a program should complement its kiosks as loyalty has also been shown to drive higher ticket and more personalized customer experiences.

“Loyalty is an important part of our global ecosystem and if you look at what it’s done for Taco Bell, digital sales have grown tremendously. Taco Bell had nearly 0 digital sales in 2018 and that is now north of $3 billion and if you get into what’s driving that adoption and the benefits of those digital sales – including increasing check and frequency – being part of a loyalty program at Taco Bell is a big part of that,” Turner said, adding that KFC has the same opportunity ahead.

Driving check and frequency is just part of the loyalty equation, however. Such programs also allow the company to collect customer data and better target them accordingly, Sami said, while also informing marketing and operations teams.

So, given this scale and these market-by-market rollouts and tests, when can we expect systemwide implementation of all of these technologies? According to Turner, the pace starts with the franchisees in individual markets. Once they’re convinced the technology is useful, it takes some time for market integration, including training.

“It will get faster and faster as we get to more scale,” Turner said.