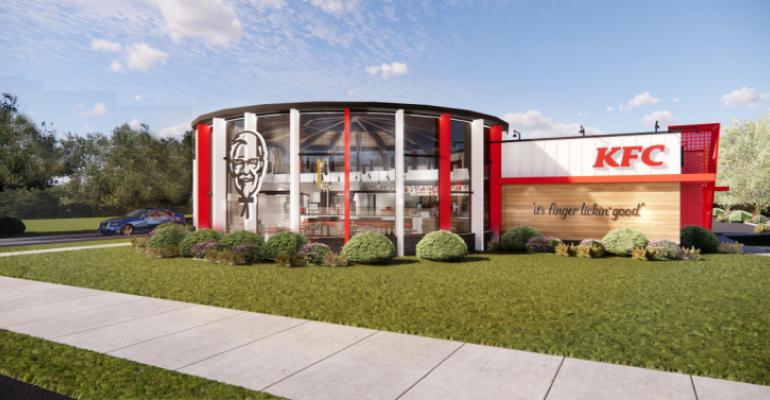 The KFC Crystal Bucket opened on May 3 and features floor-to-ceiling rounded glass windows, a cathedral wooden ceiling, and a bank vault, which has been turned into a tongue-in-cheek “vault” where they keep the Colonel’s 11 herbs and spices.
News>Quick Service

KFC unveiled the ‘Crystal Bucket’ store design in Painted Post, N.Y.: while the design is a one-off, it makes an impact

KFC unveiled last month the “Crystal Bucket” restaurant in Painted Post, N.Y. with curved floor-to-ceiling glass windows, which has already been the “most beautiful KFC in the world.” The former bank building is a one-off restaurant but has still been making waves in the community and beyond, and has become a successful marketing tool for KFC fans in the area.

The Crystal Bucket opened on May 3 and features floor-to-ceiling rounded glass windows, a cathedral wooden ceiling, and a bank vault, which has been turned into a tongue-in-cheek “vault” where they keep the Colonel’s 11 herbs and spices. The building fell into Yum Brands’ lap after a real estate developer in the area got in touch about a former bank building for sale that looks like a crystal KFC bucket. The coincidence felt like kismet.

“We’ve taken the opportunity strategically to play up the provenance that the brand has, and we have these unique landmarks now as well,” KFC chief development officer Brian Cahoe told Nation’s Restaurant News. “[KBP Foods CEO and Crystal Bucket owner] Mike Kulp owns the big chicken in Marietta, Georgia, which has a 56-foot steel chicken with moving beak and eyes. […] We’ll continue to look out for these one-off ways to tell the bigger brand story of KFC.”

A great story gets people talking and according to Kulp, the crystal bucket has already become an icon in the community.

Related: KFC is expanding its Next Generation store concept

“There was genuine excitement about this restaurant opening in the community,” Kulp said. “From a revenue perspective, the outcomes have been outpacing our expectations. It’s a very small community and the response has been amazing so far.”

The Crystal Bucket not only looks new and shiny, but also incorporates elements of the Next Gen KFC store redesigns like digital integration, built-in ‘pickup shelving, and signage and dedicated parking for digital order pickup.

“As we’re gaining momentum, we’re getting more and more spaces to build the brand out,” Cahoe said. “Our asset base in the U.S. is on a much fresher contemporary setting than it was just a few years ago, as the franchisees are thrown into the upgrade strategy.”

Moving forward, expect a variety of store formats from KFC, depending on geographical location and community need. Even if they’re not as eye-catching as a crystal chicken bucket building, the redesigns address changing customer needs.