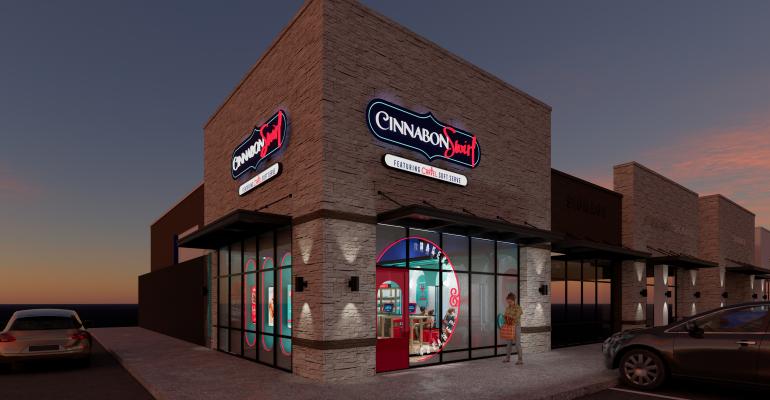 Focus Brands is investing heavily in digital, pairing up some of its iconic brands and trimming down its real estate costs.

Focus Brands has a portfolio that can satisfy most occasions – from Auntie Anne’s, Cinnabon and Carvel to McAlister’s Deli and Moe’s Southwest Grill. The diversification and scale insulated the company somewhat during the throes of the pandemic, but an abundance of challenges remained nonetheless.

For starters, its specialty brands have a heavy presence in malls and airports, places that were hit disproportionately hard in 2020 and 2021. Further, its traditional brands tend to boast large real estate footprints that support a heavier dine-in business as more consumers turned to off-premise ordering. The company is now making several adjustments to hedge against potential future headwinds, like investing heavily in digital, pairing up some of its iconic brands and trimming down its real estate costs. Last year, for instance, Focus Brands debuted the first Auntie Anne’s drive-thru with Jamba in Wylie, Texas. The location was created in response to consumer demand for more access to these brands as drive-thru usage rose steeply.

“We won’t forget about malls or non-traditional locations, but we knew if we wanted to develop at the pace we wanted to and answer to consumers’ demand for more access, we needed a plan outside of those spaces,” said Brian Krause, Focus Brands’ chief development officer, during a recent interview. “The (average unit volumes) in those captive audience type spaces wouldn’t work streetside, so we put them together. Let’s put two revenue streams together and figure out if that will work.”

The Wylie location has indeed worked, and the company has since opened 15 such locations. Now, Focus Brands believes it has a strong case study to pair up some of its other brands.

“What does an Auntie Anne’s/Cinnabon look like? Jamba does really well with a drive-thru and we’ve started to pair it with Cinnabon and that is also working. We’re in phase one of a new development of Cinnabon and Carvel coming together. Not two brands sitting next to each other in one space, but actually merging menu items,” Krause said.

The Cinnabon Swirl featuring Carvel Soft Serve, as this concept is called, was introduced at the company-wide conference earlier this year and eight franchisees have agreed to develop some locations in 2023. The plan is to test and adjust and come up with a more solidified development plan for the company’s 2024 conference. The concept presents a new way to bring Focus Brands’ brands to life, Krause said while describing a Cinnabon/Carvel panini sandwich as an example.

“This started with, how we become less reliant on mall development for these brands, to how we give consumers more access to these brands and what is the best way to do that knowing that traditional real estate is complex?” Krause said. “The answer was innovating more. We wanted to think about what it looks like when we start folding some of these brands together.”

Krause believes the Cinnabon Swirl featuring Carvel Soft Serve concept has the potential to quickly grow in high-traffic areas. The infrastructure and resources are already in place and Focus Brands has already been doing cobranding for the past 30 years in captive audience spaces.

“We’ve been doing it really well, but it’s all been in captive-audience venues like stadiums. Why can’t we do it streetside? The pandemic gave us an opportunity to pause, assess the business, get feedback from consumers and franchisees on how to evolve, and dual branding outside of captive-audience venues was the start of that conversation,” Krause said. “You’ll see us do more of this.”

Focus Brands is also adjusting its strategy for its traditional restaurant brands – namely its real estate strategy. McAlister’s, for instance, is traditionally a 3,800-square-foot restaurant. New models, however, are 2,600-to-2,800 square feet.

“We’re cutting these things down by 35-to-40%. Not only do the buildout costs come down, but there is also better access and more access to real estate. The name of the game now is square feet,” Krause said.

These plans were created on the heels of a record-setting 2021 for franchise deals at Focus Brands, with 561 deals signed in the U.S. and Canada. Things have softened a bit this year, hindered by inflation, permitting and supply chain issues, but “folks are still optimistic and getting things done,” according to Krause. With the pandemic-inspired adjustments in full swing, he is also optimistic.

“The way we’re positioned as a multi-brand platform, franchisees are buying into that, and it does set us up for when the pressure alleviates a little. When that happens, we should be able to hit the gas,” he said. “I’m excited for where we are on our journey with tons of changes to make sure we’re set up more as a platform company that shares services, and the huge investments we’ve made to make sure we’re getting ahead of the curve. All of this leads to our franchisees wanting to continue to develop.”