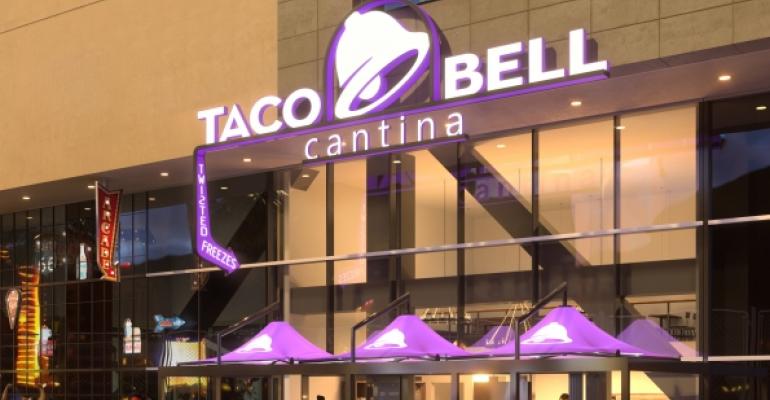 Two-story, 24-hour unit serving alcohol is the latest in the chain’s urban expansion

Taco Bell is amping up its move into urban locations with plans to open a flagship 24-hour Cantina restaurant in the heart of the Las Vegas strip this fall.

The Irvine, Calif.-based chain has been opening Cantina units that serve alcohol since last year, when the first opened in Chicago. A second later opened in San Francisco, and units are planned for Atlanta and possibly New York, Boston and Ohio, as well as smaller cities like Berkeley, Calif.; Austin, Texas; and Fayetteville, Ark.

But this new Las Vegas unit, to be located across from CityCenter and The Cosmopolitan Hotel, goes “all in” with the Cantina concept, the company said.

The two-story restaurant will offer a dining atmosphere “fit for the lifestyle of the Vegas strip,” with an outdoor patio, an open kitchen, digital displays, community seating and shareable menu items.

The restaurant, for example, will feature a wall of eight different Twisted Freezes spiked with alcohol, in addition to beer, wine and sangria. The traditional Taco Bell menu will be available, along with tapas-style items unique to Cantina locations, like nachos and rolled tacos.

“Expansion into urban markets is a key focus for us, both this year and over the course of the next several years,” said Brian Niccol, Taco Bell Corp.’s CEO, in a statement.

“When we talked about where to establish a flagship store, it didn’t take long to realize that having a presence in the heart of Vegas would undoubtedly create a unique, distinctive and fun destination and experience for Taco Bell fans.”

The 7,250-unit chain, which is operated and franchised by parent Yum! Brands Inc., based in Louisville, Ky., has plans to reach 8,500 locations worldwide by 2022, including about 200 restaurants in urban locations, a geographic area where the drive-thru heavy brand has been traditionally underrepresented.

Taco Bell is also testing some bold new designs for its restaurants designed to give more flexibility in format.

In 2015, the chain opened more than 275 restaurants domestically and remodeled another 600. This year, Taco Bell expects to exceed those numbers, the company said.