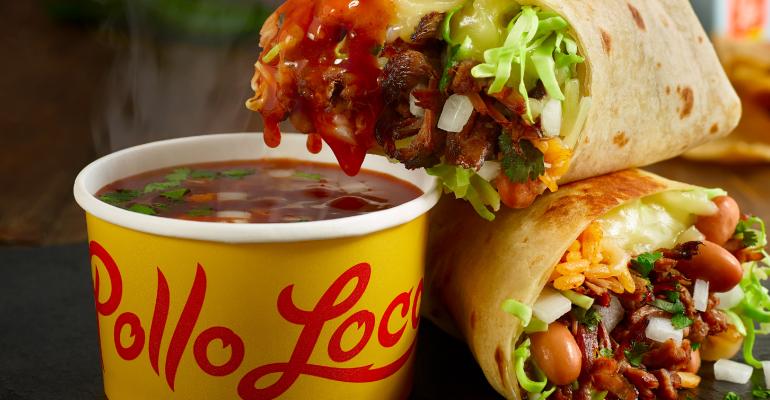 El Pollo Loco is a chicken chain, but it had a runaway hit with a limited-time offer that was all about shredded beef and a dipping cup of broth.

During the May 4 report on first quarter earnings, CEO Larry Roberts said the Shredded Beef Birria LTO launched March 17 was the most successful new product launch ever implemented and a significant accelerator of first quarter sales.

Roberts credited the birria, which includes marinated shredded beef that appears in tacos, burritos and quesadillas on the menu, alongside a Mexican-style consommé, or jus, spiked with garlic, chile and lime that serves as a drinkable dipping sauce. The items come in a unique, drive-thru-friendly box with chips and salsa, with prices starting at a recommended $8.29.

Traditionally a stew made with goat, birria — like so many dishes that originated in Mexico — become something else after arriving in California. Found all over Southern California more typically with beef, birria has become an incredibly popular option, appearing in various forms on menus from Rosa Mexicano to Taco Cabana.

El Pollo Loco jumped on the birria buzz with a social media campaign that included use of influencers across TikTok, which Roberts said resulted in more than 21 million social media impressions and went viral. On TikTok alone, the chain recently crossed 125,000 followers and the hashtag generated more than 120 million views, he said.

“The Shredded Beef Birria product and our messaging clearly resonated with our customers, as we experienced a strong acceleration in our birria sales, even before our TV marketing went live,” said Roberts.

During the quarter, the birria product mix reached 12.5%, bringing in a younger consumer. To build on that, the company promoted a Birria Burrito on National Burrito Day, which resulted in a record sales day for the system, Roberts said, and the sales mix for birria remained above 10% for six weeks straight.

The LTO is scheduled to end June 1, but Roberts said to expect more shredded beef in El Pollo Loco’s future — despite the higher food costs associated with beef.

The company is expecting 7% to 8% wage inflation for the full year, particularly as El Pollo Loco faced staffing challenges at company operated units in Southern California and Las Vegas, where workers are being lost to warehouse employers and casinos.