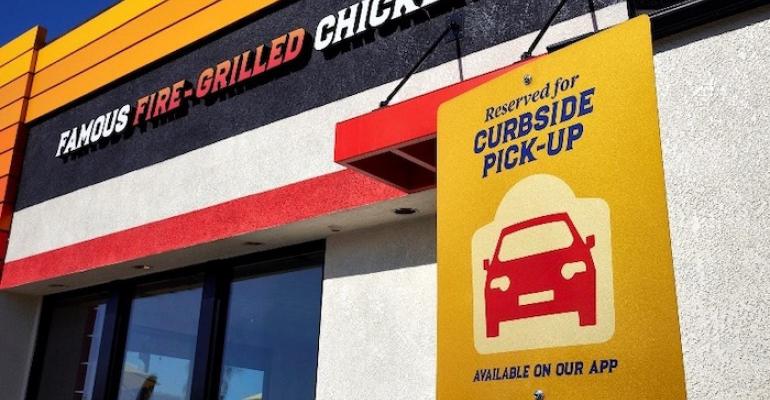 The Costa Mesa, Calif.-based quick-service brand has been layering technology onto its operations over the past year, including a curbside pickup offering that taps into global-positioning systems through the brand’s smartphone app.

“This technology enables our team members to take orders and payments from customers while they're on the drive-thru queue with the goal of cutting our drive-thru times in half by achieving a 45-second order-and-window time,” Acoca said.

Encouraging results of the tablet tests have led El Pollo Loco to expand the drive-thru tablet test this month and, if goals are met, to company-owned restaurants in the fall, Acoca said.

“After a sluggish start to the first quarter which was largely a result of an increase in COVID case rates in Southern California and heightened restrictions, we saw steady sales improvement throughout the quarter, culminating in a 26.1% increase in systemwide comparable restaurant sales in March,” Acoca said. The company on April 1 posted its highest single day of sales ever on National Burrito Day, he said.

“The ongoing improvement in our greater-Los-Angeles-area restaurants has been a key part of our recent sales improvements,” Acoca noted. “As restrictions have been lifted, we are seeing overall economic activity in the region accelerate and COVID appears to be having a declining impact on our restaurants and employees. Most of our LA area restaurants are currently able to operate at 50% capacity and while dining traffic remains understandably muted, we are optimistic that it will gradually increase as our customers continue to get vaccinated and are more comfortable eating indoors.”

“In addition, our enhanced efforts to grow our loyalty customer base are paying dividends as we have added approximately 200,000 new members since the beginning of the year,” Acoca said. “Equally as important, we are seeing an uptick in loyalty transactions, which are the centerpiece of our go-to-market strategy for the long term.”

“In addition, we completed three remodels using our new L.A. Mex Design in Los Angeles,” he said. “We expect capital spending for 2021 to be in the range of $20 million to $25 million.”