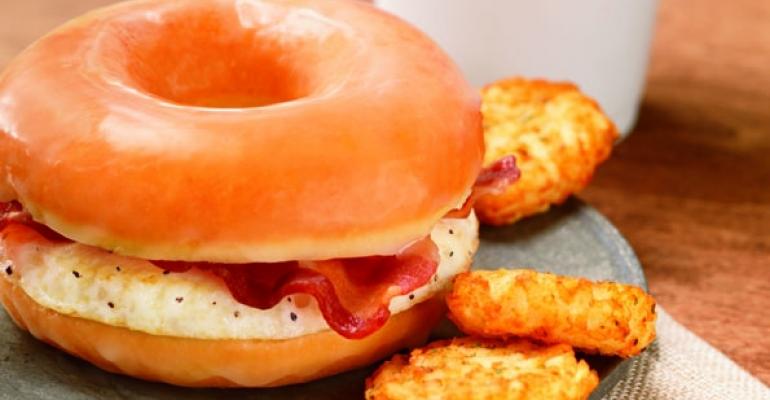 The Glazed Donut Breakfast Sandwich has been in test since April

The item, which has been in test since April in Eastern Massachusetts, has 360 calories. By comparison, Dunkin’ Donuts’ Turkey Sausage Breakfast Sandwich contains 390 calories.

Dunkin’ Donuts’ executive chef and vice president of global product innovation Stan Frankenthaler said on the company’s website that the chain was able to introduce the Glazed Donut Breakfast Sandwich rapidly “because we are using ingredients that are currently on our menu. We had to train our crew members on constructing the sandwich — slicing the donut, adding the fried egg and bacon.”

The introduction of the Glazed Donut Breakfast Sandwich marks the latest in a lengthening line of bacon-centric items being rolled out by chains across the country. Wendy’s generated buzz among financial analysts last when when it said it was likely going to introduce a Pretzel Bacon Cheeseburger nationally in 2013.

California Pizza Kitchen said in March that it was launching a pizza topped with bacon, Brussels sprout leaves, caramelized onions and Romano cheese.

Dunkin’ Donuts’ Frankenthaler told the Associated Press that the Glazed Donut Breakfast Sandwich can be customized in multiple ways, including being served on a bagel. He also said his team “tried the sandwich with all of our meats, including bacon, ham and turkey, and besides bacon I think the next best meat to use in the sandwich is ham. It’s a little more filling, but the saltiness of the ham pairs really well with the sweetness of the glazed donut.”

Dunkin’ Donuts is a subsidiary of Dunkin’ Brands Inc., which also owns Baskin-Robbins. Dunkin’ Donuts has more than 10,500 locations in 31 countries.