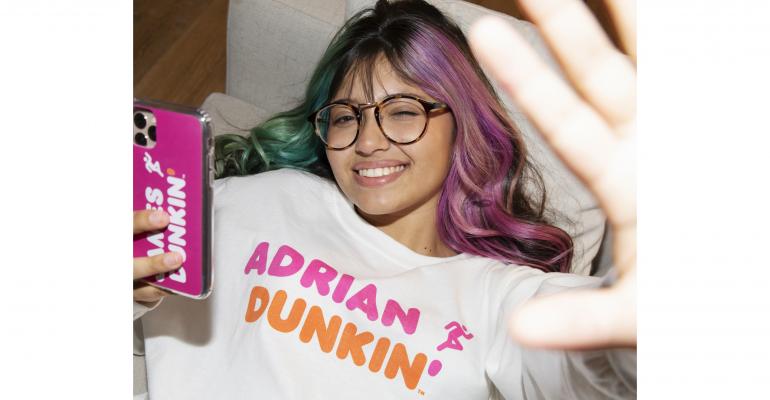 Start Slideshow ›
The new signature merchandise from the quick-service chain will launch on Nov. 17

Dunkin’ announced its holiday merchandise lineup, which includes a customizable shirt, robe, bedding and more on Thursday. The new items are available to Dunkin’ Perks members now and will be available to the general public on Nov. 17 for anyone “who bleeds orange and pink,” as the company said in a statement.

The Canton, Mass.-based quick-service brand — which Inspire Brands recently said it would purchase in one of the largest mergers in the restaurant space — announced its holiday drinks and cup design at the end of October. The promotional video, as some fans noticed, gave a sneak preview of the holiday merchandise.

The items, emblazoned with the hot pink and neon orange of the Dunkin’ logo, range from pajamas to a bathrobe to joggers and sweatshirts. This year also brings a new customizable section of the brand’s gift shop, allowing customers to add someone’s name or a word to a baseball hat, a long sleeve t-shirt, a phone case or a laptop case.

For true diehard fans, Dunkin’ has released a limited-edition section for “Giftin’,” as it calls it, with out-of-the-box items for people who are hard to shop for.

It includes a Dunkin’ x Keurig machine, scrunchies, a mini fridge, bedding, a tandem bike, an apron and a dog leash, all in the signature pink and orange.

“From functional to just fun, our holiday merch offers everything needed to bring our fans smiles and good cheer and helps them give joy to their Dunkin’ loving family and friends this holiday season,” said Drayton Martin, vice president, brand stewardship at Dunkin’.

The collection was designed by Dunkin’ in collaboration with design-led creative company Jones Knowles Ritchie. The merchandise was produced by BAMKO, a branded merchandise firm with global headquarters in Los Angeles.

"I think that the pandemic has altered the consumer dynamic with brands in general. Specifically, expectations of their role in our lives, and how they represent our values. Suffice to say, time spent inside and at home have increased scrutiny on brands, their messages, and extended offering. Because of this, the Dunkin' line poses some intriguing options that seem to align with the new normal. Cozy onesies play to those who have a reinforced love of lounging. The apron speaks to those who found a love for baking and kitchen culture. Overall, I think these are fun moments of reprieve from an otherwise crazy world," Joseph Szala, Principal at Vigor Branding, a restaurant marketing analyst firm.

While 2019’s gifts were more whimsical —a hot pink fanny pack, an electric guitar, and more to “bring out the inner kid” as Melanie Cohn, senior manager, brand engagement at Dunkin’ said at the time — this year’s are more for indoor or pandemic living, like a bicycle or comfy sweats to lounge around the house all day.

As in 2019, Dunkin’ partnered with Bachelor Nation alums and “Dunkin’ diehards” Ashley Iaconetti and Jared Haibon to announce the launch via Instagram. Iaconetti and Haibon have a combined 1.7 million Instagram followers.

Iaconetti’s video amassed almost 83,000 views in its first five hours while Haibon’s post garnered over 15,000 likes in the same amount of time.

Considering Dunkin’ has invested heavily in partnerships between established social-media influencers who have shown they are “diehard” Dunkin’ fans, it appears the brand is attempting to circumvent the traditional process of unveiling new products.

This collection was launched and announced on Instagram only. The holiday commercial that debuted in late October was inspired by Tik Tok. Dunkin’ has over 1.7 million followers on that social-media app and 2.1 million on Instagram.

It looks like the brand isn’t slowing down on collaborations with influencers and using social media to expand its reach.

In February, Dunkin’ released a line of merchandise in collaboration with Snoop Dogg for the launch of its Beyond Meat sandwich with the rapper. Until now, the brand hadn’t released any merchandise during the COVID pandemic but has released drinks, including The Charli.

Here’s a look at this year’s collection of holiday merchandise.