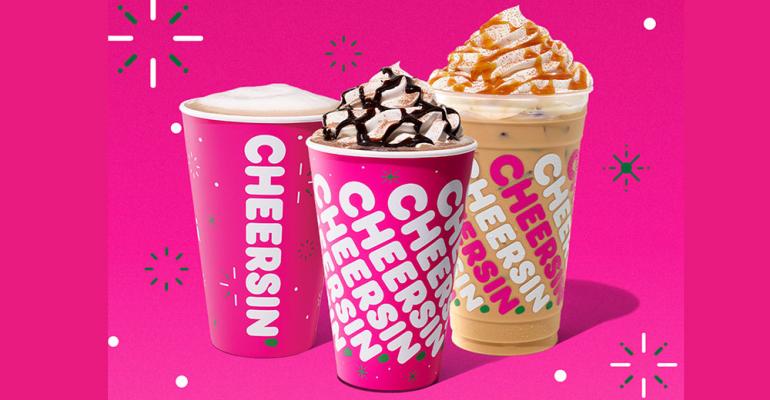 Ever since Dunkin’ took the “Donuts” off its name in 2018, the brand’s holiday slogans have become increasingly holiday-neutral. On Wednesday, the Canton, Mass.-based quick-service brand announced its slogan would be “Cheersin’,” and unveiled its holiday food and drink menu set to debut on Nov. 4.

The signature holiday beverages are back, including Signature Gingerbread Latte, which is gingerbread flavor topped with whipped cream, caramel drizzle, and cinnamon sugar;  Signature Peppermint Mocha Latte, which is peppermint mocha flavor topped with whipped cream, mocha drizzle, and hot chocolate powder; and Chai Oatmilk Latte, which is sweetened chai tea blend featuring a merry mix of spices, including cinnamon, cardamom, and nutmeg, combined with oat milk. All drinks are also available iced.

No new flavors were introduced this season, and that was intentional.

“We’re raising a cup to everyone looking for a taste of the familiar this year,” Jill Nelson, vice president, marketing strategy said in a statement. 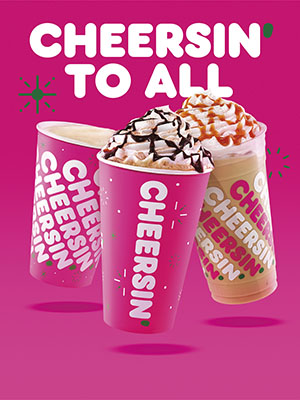 The holiday cups officially begin the season of cup comparison across the QSR brands.

The new Dunkin’ cups are bright pink, a new signature color for Dunkin’, with “Cheersin’” written in either white or green letters.

Last year, when the company rebranded, the cups debuted in the hot pink with apostrophized slogans, but they were more Christmas-themed than this year. Sleighin’, Celebratin’, Wrappin’ and Dashin’ adorned each of the four cups in 2019.

In comparison to coffee rival Starbucks, which has not yet unveiled its 2020 holiday cups, Dunkin’ hasn’t had as much controversy around its cups not being “not Christmas-y enough” for some patrons.

Some consumers protest cups that read “happy holidays” instead of “merry Christmas,” claiming those cups exist to appease those who don’t celebrate the holiday. So far there’s been no notable consumer response to the cups from Dunkin’.

It seems the brand is setting its sights on Gen Z this year.

A music video serving as a marketing campaign features influencers doing TikTok dances filmed in a style that mimics a TikTok video’s view, complete with a stream of emojis. The ad campaign is set to “Jingle Bells” with “Cheersin’ cup” as the lyrics, and is filmed vertically with the same dimensions as a phone, with the videos either multiplying across the screen or interacting with one another, the same way a TikTok video would display. The video features TikTok influencers Miranda Rae, Cale Brown, Tre Clements, and Honey B.

Dunkin’ invites fans to do the Dunkin’ dance and post their own videos to the app.

This isn’t the first push from Dunkin’ toward the younger generations.

In September, Dunkin’ partnered with 16-year-old TikTok influencer Charli D’Amelio. They promoted “The Charli,” her favorite drink, a medium cold brew with whole milk and three pumps of the brand's caramel flavor swirl.

The initial post on D’Amelio’s TikTok garnered 38.6 million views. Dunkin’ says it saw a 20% sales boost for all cold brews the day her drink debuted, and a 45% surge the next day, Drayton Martin, vice president of brand stewardship, told TMZ.

“It’s simply cold brew [coffee] with caramel and milk, promoted by Charli d’Amelio, a 16-year-old TikTok sensation who genuinely loves Dunkin’,” Dunkin’ Americas president Scott Murphy said. “We took an existing product, renamed it after her, and positioned it to appeal to a younger consumer, and we did this through a highly relevant social media channel, keeping Dunkin’ in the forefront of the American dialog.”

He said the day the drink was launched the Dunkin’ app hit a new record of daily users.

Based on this week’s earnings call, the brand will continue to pursue partnerships with TikTok and Instagram influencers.