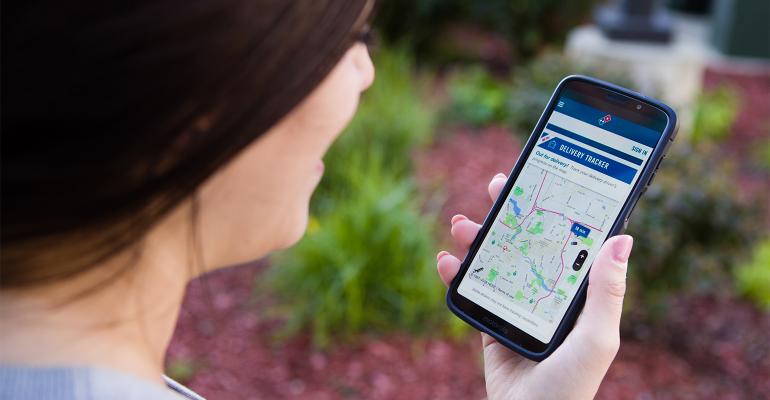 Domino’s takes cue from Uber with GPS tracking of pizza

Pilot program in Arizona will expand to Seattle, Virginia and Michigan

The Ann Arbor, Mich.-based pizza chain, which has refused to augment its in-house fleet of drivers with third-party delivery operators, is launching GPS tracking of drivers in 27 corporate-owned stores in Phoenix, Az.

The pilot program allows customers to track the location of their pizza driver similar to the way Uber users can watch their driver approach. Domino’s said it plans to expand the program later this spring in Lansing, Mich., Roanoke, Va. and the greater Seattle area.

When a customer orders from these pilot locations, the location of their order and driver will show up on a map through the Domino’s website or the company’s app. Customers will also receive an estimated delivery time and can opt-in to receive SMS notifications when their order is about 2 minutes away from being delivered.

“We’re excited to offer this feature to our customers,” Dennis Maloney, senior vice president and chief digital officer, said in a statement. “Transparency on orders that are out on the road makes a big difference to customers, as well as drivers and store managers. With GPS tracking everyone can have the best possible delivery experience.”

As third-party delivery growth soars, tech-centric Domino’s has moved swiftly to add more innovative solutions for pizza delivery. In late March, the company said it would be adding in-car pizza-ordering capability via car dashboards through a partnership with auto technology company Xevo Inc.

The AnyWare pizza ordering platform, projected to debut in late 2019, will come pre-installed in millions of new cars, the company said.

Last week, Domino’s, which has more than 16,000 stores worldwide, reported a 3.9% increase in same-store sales for the first quarter. It was the 32nd consecutive quarter of same-store sales gains, but the slowest quarterly growth rate for the brand in at least three years.

Competitors in the traditional pizza space have added third party delivery including Papa John’s. Pizza Hut is also testing a hybrid program with Grubhub, where pizzas ordered from Grubhub are delivered by Pizza Hut drivers.

Domino’s made it clear during its most recent earnings call that it would not be copying rivals by jumping into the third-party delivery space.

“It’s not clear why I would want to give up the franchisee’s margin or data in the business and give it to someone who would ultimately use it against our business,” CEO Ritch Allison said last week.