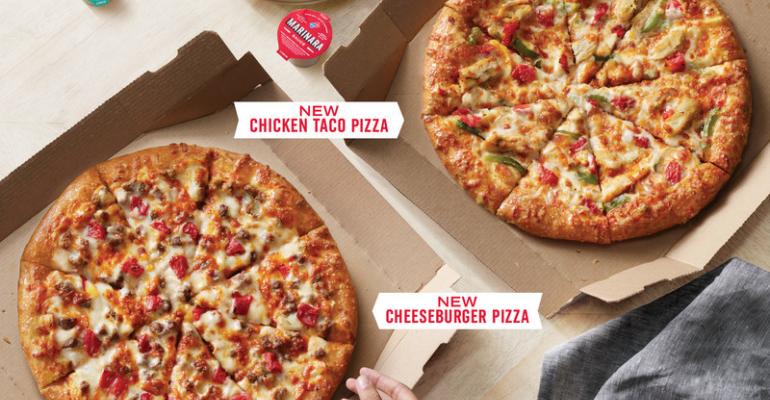 Domino's
Domino's cheeseburger and taco pizzas were inspired by consumer needs during the pandemic.
News>Quick Service

Domino’s Pizza — known for its careful menu innovation strategy — just released the company’s first new pizzas in eight years: the chicken taco and cheeseburger pizzas, which are both designed with delivery solutions for the COVID-19 era in mind.

The cheeseburger pizza is topped with ketchup-mustard sauce, American cheese, beef, onions, diced tomatoes, shredded provolone and cheddar cheese, while the chicken taco pizza is made with American cheese, taco seasoning, grilled chicken, onions, green peppers, diced tomatoes, provolone cheese and cheddar cheese. Both menu items will be available for a limited time at $11.99 for a large pizza or for a medium pizza at a $5.99 mix and match upsell to $8.99.

“The idea started from looking at the current food delivery landscape,” Domino’s chief marketing officer Art D’Elia told Nation’s Restaurant News. “With a lot of people relying on aggregators to get tacos and burgers delivered, there are a ton of social media posts out there about soggy burgers and tacos, so we wanted to give people tacos and burgers that actually stand up well to delivery.”

Unlike some of their pizza chain competitors (like Pizza Hut, for example), Domino’s is very conservative in releasing new pizza menu items. Their last new addition to the pizza menu was in 2012 with the advent of Domino’s pan pizza. Since then, they have only added side items to the permanent menu, like their newly remixed wings, which were released in July.

“We don’t intend these new products to be LTOs; they are permanently on the menu,” D’Elia said, adding that the Ann Arbor, Mich.-based chain’s latest pizza innovation directly correlated with changing consumer needs during the pandemic.

“Consumers are now getting more food delivered than ever before and they are looking for variety […] every time we see an opportunity to make the consumer’s pizza experience better, we home in on that,” he said.

But don’t expect Domino’s to start churning out new pizzas every month: D’Elia still called their approach to menu innovation “methodical” and said they will continue to look for product additions that trulyresonate with their audience.

Domino’s is not the only national pizza delivery to release new menu additions this week. Papa John’s just announced the release of the grilled Buffalo chicken Papadia, a spicy and tangy variety of its wildly popular foldover sandwich. The new Papadia sandwich is being offered as a $6 promotion until October 25.

Little Caesar’s also announced the release of its LTO Slices-n-Stix, a half-pepperoni pizza, half-“cheese stix” pie with their signature crazy sauce for $6.