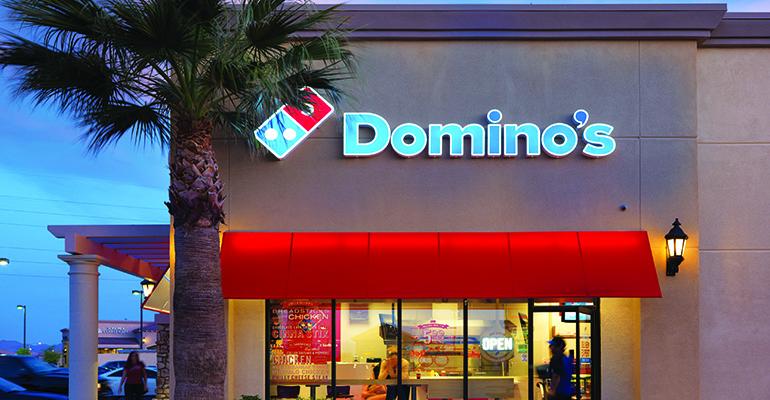 “To summarize the quarter, we delivered, and we delivered in every way,” Doyle told investors in a conference call announcing the earnings.

Doyle announced earlier this year that he would step down at the end of June. Richard Allison, president of Domino’s International, will take over as CEO.

Doyle attributed the success to robust growth in traffic and said that, unlike in the past several quarters, delivery grew faster than takeout. He said that Domino’s achieved that success despite the attention being given to third-party delivery services.

“As our results demonstrate, we have continued to see very little impact on our business from third-party delivery,” he said.

He added, “Delivery aggregator economics remain challenging and unproven,” and said those competitors were learning something that Domino’s has known for years: ‘Delivery is hard.’”

He said Domino’s was now delivering to even more locations with the April 16 launch of Domino’s Hotspots, which allows delivery to places without traditional addresses, like parks, stadiums and beaches.

Domino’s locations have individually selected such “Hotspots” in their delivery areas where drivers can meet customers and hand off orders. To ensure driver safety, those locations are determined by management at each unit, he said.

More than 150,000 such locations are now active, according to an April 16 press release.

Doyle told investors that the new system allowed for even more convenience, “and the ability to order from us anywhere and any time.”

The outgoing CEO also touted Domino’s initiative to allow for 100 percent digital ordering with the use of voice-recognition software. He said the chain was testing the software in around 20 locations and declined to indicate a timeframe for rollout at all of the chain’s nearly 15,000 locations, but he said it would improve the customer experience and allow staff to focus on making and delivering pizza rather than taking phone orders, which now account for 25 percent or more of sales: Just over 60 percent of Domino’s orders are now digital and around 10 percent are walk-ins, which could be handled by ordering kiosks.

“I’m not big on hyperbole, but this could be a game-changer for us and our customers,” Doyle said.

Domino’s opened a net total of 110 restaurants — 31 domestic and 79 international — during the quarter, ending it with a total of 14,966 locations, of which 5,649 are domestic. Five of the new locations are company-owned, bringing that total to 397.