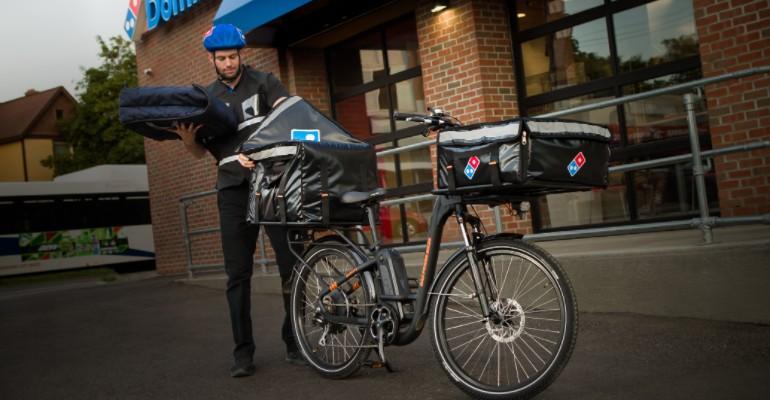 Domino’s has announced yet another delivery efficiency innovation with the rollout of a national e-bike delivery program in partnership with Rad Power Bikes. The program, which was already tested out in Houston, Miami and New York, will allow delivery drivers to choose to pedal a motorized e-bike instead of driving a car or riding a traditional bike to complete their deliveries.

The pizza chain will be rolling out the bikes to hundreds of corporate-owned stores in Miami, Salt Lake City, Baltimore and Houston later in 2019, while franchisees nationwide will have the option of buying the bikes.

“Domino’s tested e-bikes in a number of corporate-owned stores earlier this year, and those stores saw improvements in overall delivery and service,” said Tom Curtis, Domino’s executive vice president of corporate operations. “They also experienced labor benefits, as the stores were able to hire from a wider pool of candidates, including those who might not have a car or driver’s license.”

The e-bikes have the capability of running for 25-40 miles with a top speed of 20 miles per hour before needing a charge and can hold up to 12 large pizzas, with soft cargo areas for cold drinks, sides, and dipping sauces. Though considerably slower than a traditional vehicle, a Domino’s representative told Nation’s Restaurant News that the bikes are designed for congested urban areas where delivery drivers are less common.

“While delivery on a traditional bike solved many of our traffic and parking issues, the hills in Seattle were tough on even our best cyclists,” Domino’s franchisee Greg Keller said in a statement. “E-bikes were a game-changer for us, and we’ve been delivering with them for three years now. We have been able to save money, provide better service, increase hiring and maintain a happy workforce.”

This in-house bike delivery program was announced on the heels of a tough second quarter for the Ann Arbor, Mich.-based pizza chain, which saw its lowest same-store sales growth in seven years for the quarter ended June 16. CEO Rich Allison “significant pressure” from continued third-party delivery aggregator growth as a major contributor.