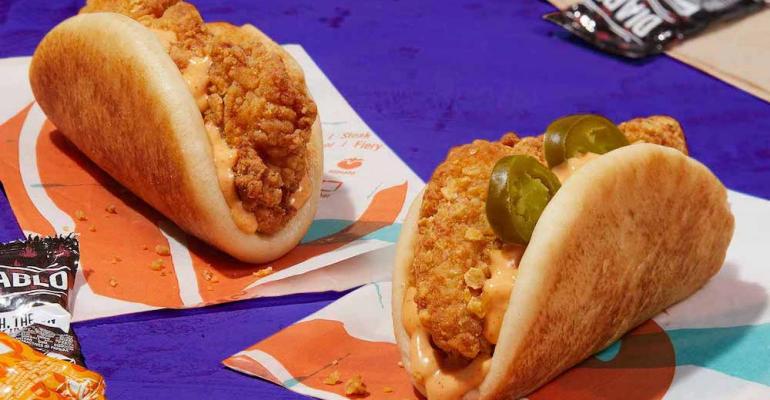 Taco Bell’s announcement this week that it was introducing a fried chicken taco grabbed national consumer media attention, but it’s not exactly shocking, and it’s been a long time coming.

The Yum! Brands subsidiary with around 6,700 locations is moving deliberatively. Starting March 11, it will begin testing the new item at participating locations in Charlotte, N.C., and Nashville for $2.49.

Like many of the dozens of chains offering fried chicken between pieces of starch, Taco Bell’s new Fried Chicken Sandwich Taco comes in regular and spicy varieties. Both are made of chicken marinated in jalapeño buttermilk, seasoned with Taco Bell spices and rolled in a tortilla chip coating. Those strips are served in a puffy bread folded into a taco shape and dressed in creamy chipotle sauce. The spicy version has slices of jalapeño pepper.

This is by no means Taco Bell’s first chicken item. In 2015 it introduced the Chickstar as a limited-time offer. It was fried chicken with cheddar cheese, lettuce and tomatoes in a grilled flour tortilla. At the same time it offered a fried-chicken version of its Grillers — a snack-sized taco — as well as a fried-chicken quesadilla.

Incidentally, the chicken-as-starch-replacement maneuver was later carried out by 130-unit pizza chain Pieology in pre-pandemic 2020, when it introduced a pizza crust made mostly of chicken.

This particular chicken item has been in the works since before the pandemic. Taco Bell’s vice president of product development, Heather Mottershaw, told NRN last August that the tortilla coating had been in development since 2019.

And it’s around the 40th salvo in this round of the so-called “chicken sandwich war” which, let’s face it, is not a war but the marketing and sale of sandwiches.

Of course this all started what seems like approximately 40 million years ago, in August of 2019, when Popeyes Louisiana Kitchen introduced a chicken sandwich and gently trolled segment-leader Chick-fil-A about it on social media. That went viral, Popeyes temporarily ran out of fried chicken breast fillets, the scarcity created more demand and Popeyes continues to reap the benefits, attributing a $400,000 increase in average unit volume since the sandwich was introduced to the item’s popularity.

By the way, Chick-fil-A is still top-of-mind when it comes to fried chicken sandwiches, according to a survey conducted earlier this month by consulting firm Revenue Management Solutions.

It asked 1,020 consumers what quick-service restaurants came to mind as offering chicken sandwiches, and Chick-fil-A came out on top, followed by McDonald’s, Burger King, KFC, Wendy’s and then Popeyes.

The pandemic gave people far more serious things to worry about, and talk about chicken sandwiches died down, but only for about two months.

Then Golden Chick, a Dallas-based chain of around 200 units, launched the Big & Golden Chicken Sandwich in time for Memorial Day weekend.

Curry Up Now, a 13-unit fast-casual Indian chain introduced a tandoori fried chicken sandwich, and lest you think Taco Bell’s the only taco chain to offer fried chicken, Velvet Taco, Fuzzy’s Taco Shop and Torchy’s Tacos all have offered it too.

Despite the large number of chains offering fried chicken sandwiches, most of them are similar, and simple, made with chicken breast (the Momofuku group’s chicken sandwich brand, Fuku, actually switched from thigh to breast at most of its locations) garnished with pickles and possibly mayonnaise or a mayonnaise-based spicy sauce. Sometimes one or two other brand-specific components are added. For example, Church’s Chicken serves its spicy chicken sandwich with a pickled jalapeño pepper on the side, which has always accompanied the brand’s spicy bone-in fried chicken and reinforces the brand, as does honey butter, which is brushed on the sandwich’s bun.

Church’s global chief marketing officer Brian Gies told NRN at the time of its new sandwich launch in October that customers want their chicken sandwiches to be simple.

“Consumers told us that they don’t want a lot of distractions,” he said. “They wanted a classic build to the sandwich.”

The pandemic has been a boon to fried chicken sandwiches, which tend to travel better than burgers and, according to Revenue Management Solutions, consumers spend less on chicken sandwich meals and perceive them as being a better value.

But if you think the age of the burger is over, think again. According to consumer research firm The NPD Group, for the year ending December 2020, 7 billion burgers were ordered at restaurants in the United states, compared to 2.6 billion chicken sandwiches.