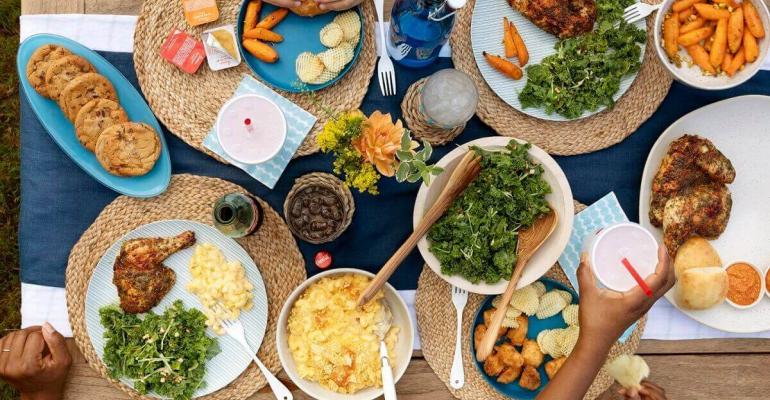 Chick-fil-A on Tuesday revealed new menu details for its delivery-only brand, Little Blue Menu, which was first announced in May.

The quick-service restaurant chain has developed three delivery-only brands that will be piloted at one Nashville location starting this fall under the “Little Blue Menu” umbrella – named for the actual little blue menu at founder S. Truett Cathy’s first restaurant, Happeville Dwarf House.

Atlanta-based Chick-fil-A’s three virtual brands are called Flock & Farm, Garden Day, and Outfox Wings. They will all have their own unique flavors.

“The flavor profiles are fantastic,” said L.J. Yankosky, senior director of the beyond the restaurant team at Chick-fil-A in a release. “The culinary team that developed the virtual restaurants is world-class, and the ingenuity they harnessed for each menu does not disappoint.”

There will be roasted chicken at Flock & Farm and, according to a Chick-fil-A release “a thick-cut pork belly BLT, garden-fresh salad, crispy Chick-fil-A Waffle Potato Fries®, and bone-in wings” all available in a single order.

“There are so many great menu options to choose from, but I’m particularly excited about the delicious oven-roasted chicken from Flock & Farm,” Yankosky added in the release. “The restaurant features marinades made fresh in-house, which were perfected by [senior culinary lead developer Stuart Tracy] and his team.”

Each location of Little Blue Menu will be a standalone and not operate out of existing Chick-fil-A units. The second location is set to open in Atlanta in 2022.

“Delivery is here to stay,” said John Moore, one of the three Chick-fil-A franchise operators who will oversee the Little Blue Menu delivery kitchen in Nashville, in a statement. “Now more than ever, customers want a variety of options delivered quickly, right to their doorstep.”

The Little Blue Menu location in Nashville will be located on Church Street between 16th and 17th street and have a 10-minute delivery radius.