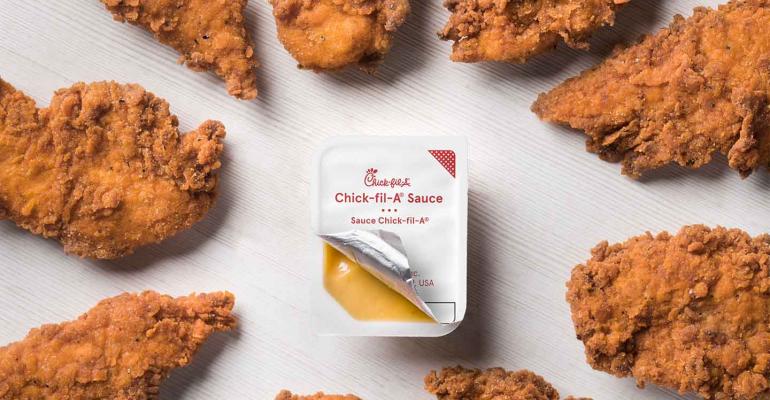 Chain is also reducing size options for items including coffee while expanding its pilot of spicy chicken strips in Charlotte, N.C. and Arizona

Chick-fil-A is removing six items from menus in two markets to test how the downsized menu impacts food quality and service.

The items being scrapped in select restaurants starting Jan. 13 in Charlotte, N.C. and Arizona include two breakfast items: sausage and the sunflower multigrain bagel. The other four items exiting the menu are the original Chick-n-Strips, the Grilled Cool Wrap, side salad and decaf coffee.

In those test markets, the company is also reducing size options for certain items as part of the menu modification test. The Nuggets Kid’s Meal will be served with 5 nuggets only. Catering trays will come in one size: medium. Small will be the only choice for ice cream cones and coffee. Milkshakes, Iced Coffees and Frosted Beverages will be sold in 16 ounce cups.

“Our goal is to serve quality food as efficiently as possible,” the Atlanta-based chain said in a statement. “For us to continue providing the food and service you know and love, we are testing this modified menu to see if it improves your experience in our restaurants.”

The strips come in two entrée sizes: 3-count and 4-count. At breakfast, the Spicy Chick-n-Strip Biscuit is a sandwich served with two spicy chicken strips. The grilled sandwich features a boneless breast of spicy marinated chicken with Colby-Jack cheese, lettuce and tomatoes served on a brioche bun.

The chicken is seasoned with a spicy blend of peppers.

"Customer feedback from the test will help determine if the new spicy menu items are added to the menu nationwide," the company said.

The spicy version of the brand’s Chick-n-Strips have been testing in Arizona, Philadelphia, parts of Texas and Arizona.

Chick-fil-A joins a handful of other top quick-service chains including Taco Bell, McDonald's and Jack in the Box who have decluttered their menus in the past year.  As menus bloated, service has slowed down as QSR chains have scrambled to meet consumer demand for customization and variety of choices.  McDonald's, for example, trimmed three sections of its menu including eliminating poor performing items from its late-night menu. The chain also gave franchisees the option to choose which breakfast foods to keep on the all-day menu.