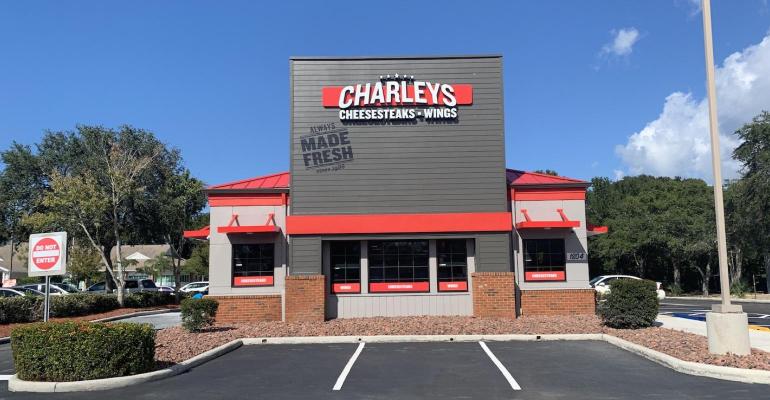 For Charleys Philly Steaks, the world’s largest cheesesteak franchise, digital initiatives are a top priority: the franchise places tremendous importance on engaging with customers through their loyalty program, Charleys Rewards, which already has over 1,000,000 members.
News>Quick Service

This partnership marks the ultrafast delivery leader’s fifth station in the United States, and expands its drone delivery service to approximately 140,000 customers

Charleys Philly Steaks, the largest cheesesteak franchise in the world, today announced it has partnered with Flytrex, the leader in ultrafast delivery for food and retail, to deliver freshly-made grilled cheesesteaks via drone in Durham, North Carolina. Orders from Charleys are placed using the Flytrex app and delivered via the skies to front and backyards of residents with an average flight time of just three minutes.

The process for ordering delivery via drone will be the same as previously established delivery stations – eligible customers can order their favorite cheesesteaks, fries, real-fruit lemonades and more from Charleys, as well as food and goods from other local restaurants, cafes and retailers. Orders are placed using the Flytrex app, which updates customers regarding their order status along the route until the package is safely lowered by wire into their backyards.

“The future of delivery is here, and we couldn’t be more excited. I can think of no better way to receive a fresh cheesesteak delivered hot off the grill to my front yard,” said Brian Hipsher, Charleys’ CMO. “We look forward to expanding our partnership with Flytrex to create a more cost effective and quick delivery service for all our guests.”

For Charleys Philly Steaks, the world’s largest cheesesteak franchise, digital initiatives are a top priority: the franchise places tremendous importance on engaging with customers through their loyalty program, Charleys Rewards, which already has over 1,000,000 members. Charleys guest-centric approach to improving the brand includes introducing new menu items and integrating accessible, supportive technologies that make it easier for guests to order online, giving the brand a competitive edge in the ever-growing QSR industry.

“We are thrilled to spread our wings once again in North Carolina and bring delicious cheesesteaks to our new customers in Durham,” said Yariv Bash, CEO and cofounder of Flytrex. “This partnership with Charleys and its accompanying expansion brings us one step closer to a future of affordable, ultrafast delivery that is both safe and green. We look forward to continuing growing our delivery service nationwide to reach the tens of millions of backyards across the country.”

This expansion to Durham marks Flytrex’s fifth station in the U.S. and fourth in the ‘First in Flight’ state. Flytrex has three other operational stations in the state of North Carolina: in Fayetteville, Raeford, and Holly Springs; and recently expanded its drone delivery service to Granbury, Texas, just outside of Dallas-Fort Worth. The service will operate in cooperation with longtime partner Causey Aviation Unmanned under the recently granted Federal Aviation Administration (FAA) waiver allowing a delivery radius of two nautical miles across its stations in North Carolina and Texas – reaching hundreds of thousands of potential homes.

In 2017, Flytrex successfully launched the world’s first fully autonomous urban drone delivery system in Reykjavik, Iceland. The company has since been working closely with regulators to help ensure the highest safety standards in getting drone delivery off the ground. It has participated in the FAA’s UAS Integration Pilot Program (IPP), which concluded in October 2020, and continued in the FAA’s subsequent initiative, BEYOND, working with the North Carolina Department of Transportation to help tackle the remaining challenges of UAS integration.

In 1986, Charleys redefined the Cheesesteak. Today, over 700 locations around the world serve up the #1 Cheesesteak In The World® made with fresh, quality ingredients, always grilled-to-order. Also known for its loaded Gourmet Fries and refreshing Real Fruit Lemonades, the restaurant franchise is quickly expanding to serve the world's favorite Cheesesteaks across the globe. For more information on Charleys Philly Steaks, visit www.charleys.com or follow us on Facebook and Instagram at @charleyscheesesteaks and Twitter at @charleys.