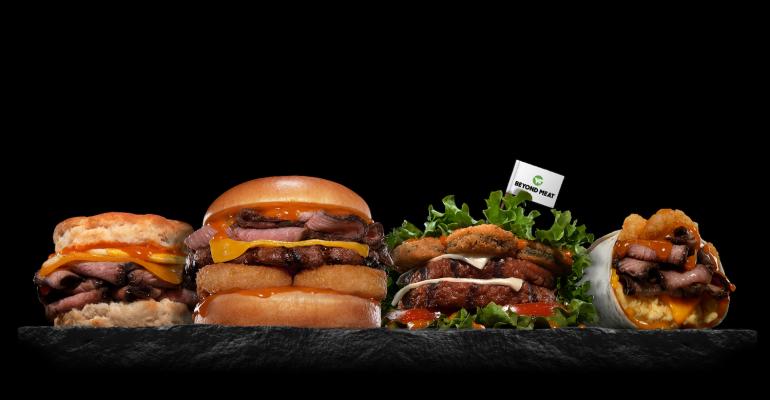 New dinosaur-themed burgers, biscuits and wraps to be supported by multifaceted marketing campaign

CKE Restaurants Holdings, the parent company of the Carl’s Jr. and Hardee’s quick-service chains, has launched a line of limited-time menu items tied to the release of the film Jurassic World Dominion by Universal Pictures and Amblin Entertainment, which will arrive in movie theaters June 10.

But the menu items are available now.

Both chains are offering the Primal Angus Thickburger, made with a charbroiled burger patty topped with pepper-crusted prime rib cooked in sous-vide for around 8 hours to about medium-well doneness along with a new Amber BBQ sauce, smoked cheddar cheese and onions rings on a toasted potato bun. Pricing starts at $7.99 at Carl’s Jr. and $6.79 at Hardee’s, but may vary by location as the system is 94% franchised.

Both chains also have the Primal Burrito, which features the prime rib and Amber sauce, plus the chains’ “hash rounds” hash brown nuggets, smoked cheddar and shredded cheddar cheese and eggs — scrambled at Carl’s Jr. and folded at Hardee’s — in a warm flour tortilla. It starts at $5.49 at Carl’s Jr. and $4.29 at Hardee’s.

They also both have a Primal Biscuit with Fried Egg made with prime rib, smoked cheddar, a fried egg and Amber sauce, starting at $4.49 at Carl’s Jr. and $4.29 at Hardee’s.

Additionally, Carl’s Jr. is using the Beyond Burger plant-based protein that it introduced in 2019 for the Beyond Wraptor Burger, which also has the Amber sauce, Swiss cheese, fried zucchini and tomatoes in a green leaf lettuce wrap, starting at $6.99 for a single and $9.99 for a double.

Owen Klein, CKE’s vice-president of global culinary innovation, said the Beyond Wraptor Burger “is playing off carnivores versus herbivores, a common tension in the Jurassic movies.”

Klein said he and his team watched all of the Jurassic movies in preparation for the menu development, which was a long process: He said they spent around nine months developing the prime rib.

“’Primal’ has a lot of linkage with the Jurassic brand — the life finds a way kind of thing, a wild side to the dinos,” he told Nation’s Restaurant News.

The Amber sauce is a reference to the source of the dinosaur DNA from the original Jurassic Park film, in which the genetic material was retrieved from amber.

He said the sauce is “smokey, it’s sweet, kind of got a barbecue [flavor] to it — a little bit of tang,” plus a “skosh” of mustard.

The new menu items will be promoted starting May 23 with local and national media, including television, radio, social media, print, billboards and in movie theaters, including an augmented reality lens on Snapchat and a branded digital game via the Octopus gaming platform for Uber and Lyft riders.

“From TikTok to Waze, the brands invested in unique partnerships as well as captivating billboards to showcase this compelling collaboration,” CKE chief brand officer Chad Crawford said in a release announcing the campaign.

There will also be a “Dino Takeover” June 1-8 at a Carl’s Jr. location in Glendale, Calif. and a Hardee’s restaurant in Nashville, near CKE’s Franklin, Tenn., headquarters, the company said. That will include redecorating the restaurants to “bring the atmosphere of Jurassic World Dominion to life, giving customers the ultimate experience between the events and menu,” a spokesperson said, adding that a “surprise” T. rex will be at the Glendale location.

Restaurants in the Middle East and Canada also will have their own Jurassic World Dominion offerings, CKE said.