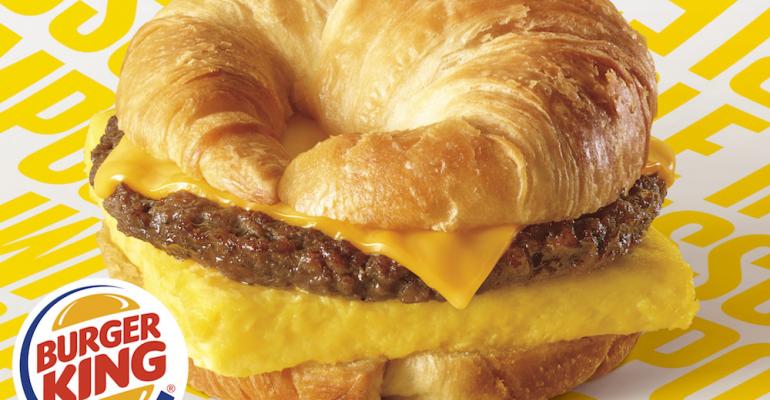 Similar to the Impossible Burger, which Burger King uses in the Impossible Whopper that the Miami-based quick-service chain rolled out nationwide last year, Impossible Sausage is a meatless product meant to resemble meat, but with much lower environmental impact.

It has not said how the impact of its pork substitute compares to real pork. Pork is widely regarded as having a much lower carbon footprint than beef.

Related: 8 food and drink trends for restaurants to watch for in 2020

However, unlike the beef substitute, which is nutritionally similar to beef, Impossible Sausage and its sister product, Impossible Pork, have substantially less fat, saturated fat, cholesterol and calories, more iron and around the same amount of protein as its meaty counterparts.

Both pork substitutes were launched at the International Consumer Electronics Show, or CES, in Las Vegas this week.

Burger King said Tuesday it would start testing an Impossible Croissan’wich in late January at participating restaurants in Savannah, Ga.; Albuquerque, N.M.; Montgomery, Ala.; Lansing Mich., and Springfield, Ill. The price of the sandwich will vary depending on the location, according to a public relations official representing Burger King.

The sandwich is meatless, but not vegan: The croissant is made with butter and the sandwich itself has eggs and melted cheese as well as Impossible Sausage.

In a video on Impossible Foods’ web site explaining the new product, founder and CEO Pat Brown said his company’s mission is “to completely replace animals in foods by 2035.”

“Beef is popular around the world,” he said, “but in many cultures the most popular and familiar and common dishes use pork as the main source of meat, so for us to have an impact in those markets, pork is a necessity.”