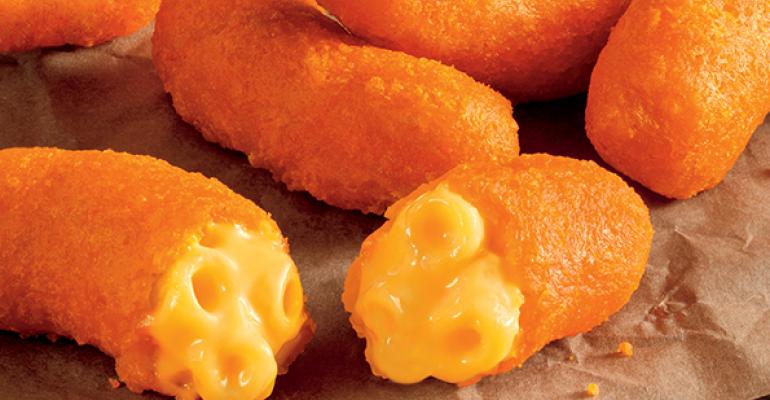 Burger King is about to unleash its latest attention-getting product on the world: Mac n’ Cheetos.

The snack item is a mashup of macaroni and cheese and Cheetos in cheese stick form. Customers will be able to get them on Monday.

The product in some respects represents the continuing evolution of the Miami-based burger chain since the private-equity group 3G Capital bought it in 2010 for $3.3 billion.

In the time before the sale, analysts and others criticized Burger King for adhering to a marketing strategy targeted mostly at young men, while rival McDonald’s thrived by going after families. Burger King after the acquisition then tried going after that broader McDonald’s demographic with a rapid-fire series of products like coffee drinks and new burger lines. It also ditched its famous mascot, The King.

More recently, however, the chain has found success by going in its own direction — even while aggressively going after some of its rivals’ customers with discounts such as the 10-piece chicken nuggets for $1.49.

The chain’s product offerings in particular have charted new ground in the burger world. The company in 2013 debuted a lower-calorie fry, Satisfries. Last October it served a Halloween Whopper with a black bun and then followed that up this year with the Angriest Whopper, which had a red bun. This spring Burger King released a line of grilled hot dogs.

Burger King also scored points with exploring older products. In 2014, it brought back Chicken Fries two years after the product was left on the cutting room floor after a massive campaign from the product’s fans.

Many of these products have come even as rivals focus on clean ingredients or more local sourcing. Burger King, it seems, has gone back to its original strategy of targeting heavy quick-service users. It even brought back The King.

“Now it seems like they are charting their own course. They are differentiating. They are creating things of interest to their core and a younger QSR user.”

Many of these products are aimed at younger consumers and are built for a social media age in which companies are competing for attention. Burger King has proven especially adept at that in recent years with many of its product offerings.

And Mac n’ Cheetos is right in the social media wheelhouse. Macaroni and cheese, Davis said, has become increasingly popular recently, especially in upscale restaurants where chefs have put their own touches on the traditional comfort food.

But Burger King took it a step further, licensing the Cheetos brand from PepsiCo’s Frito-Lay. The mac n’ cheese is coated with a crust made with Cheetos and deep fried, making them snack sized. The product will be sold for $2.49.

“They are borrowing the interest of another product — Cheetos, for instance,” Davis said. “They are things that have some appeal, their own brand appeal, and when you do a tie-in with another product it just adds to that appeal.”

Lots of these attention-getting products burn out after some initial strong interest. Burger King generated massive sales with Satisfries but sales ultimately fizzled out on the product and the company discontinued them.

Still, the attention these products generate can help spur sales.

“They’re trying to grab the attention of consumers,” Davis said. “When you offer something new and different, it attracts attention. It can drive other sales. They may come in for a Whopper, but then they get this out of curiosity.

“On top of that, it gives people something new to try, and a reason to visit without discounts.”