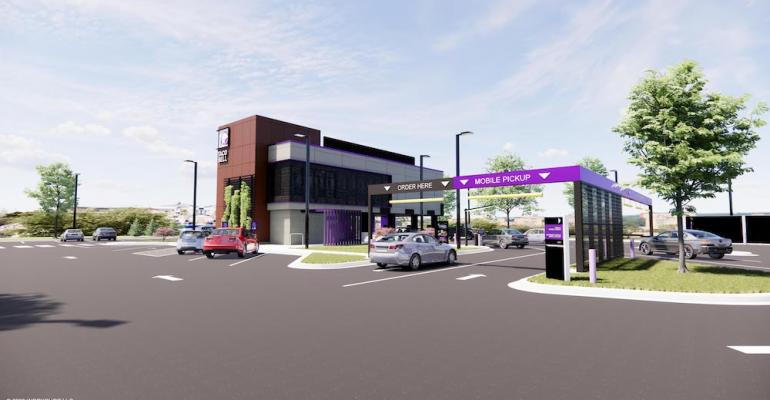 Described as looking like something between a bank and a “Demolition Man” prophecy, the new Taco Bell Defy promises to up the ante on drive-thru innovation.

Fueled by the pandemic and a lingering reluctance to engage in human contact, operators from Chipotle Mexican Grill to KFC have been racing to design more futuristic, frictionless drive-thrus that will make it quicker and easier to pick up food.

The new Taco Bell Defy unveiled this week, which is scheduled to open in spring 2022, is the latest in this ongoing movement.

The Defy will have four drive-thru lanes — or as few as two and as many as six, should the lot size allow.

It was a design that fundamentally was born during the pandemic, when it became clear to Taco Bell franchise operator Border Foods that consumers wanted the convenience of digital ordering and drive-thru pickup more than they wanted dine-in seating, but it had to be faster, smoother and contact free.

Lee Engler, founder and CEO of Border Foods, was already one of the first franchise operators to open a Go Mobile version of Taco Bell, the digital-forward double-drive-thru prototype unveiled last year. To date, 13 Go Mobile units have opened systemwide and another 85 are in the pipeline.

But Engler felt there was more opportunity to eliminate capacity restraints.

Taco Bell has multiple points of access, allowing guests to order via app, website, kiosk or third-party delivery platform, said Engler. “But we always had the same pain point of the drive-thru window. We thought, if we could unlock the pain point of how people get our food, that would unlock a tremendous amount of opportunity in our business.”

“We didn’t want to be capacity constrained, so one of the ideas was with the speed we can deliver. Having three or four lanes would make it so there’s never any cars waiting,” said Engler.

Engler brought the idea to Taco Bell corporate and got the green light.

Mike Grams, Taco Bell’s president and global chief operating officer, said the franchisor sees the Defy design as an evolution of the tech-forward Go Mobile, which was years in the making.

Being able to tap the “restless entrepreneurial energy”of franchisees — with a big push from the pandemic — allowed the project to come to fruition incredibly quickly.

“It would have taken us years to develop this in the past,” said Grams.

The experiment also fits into Taco Bell’s longtime efforts to create a diverse portfolio of flexible formats to fit different communities with unique needs, which is part of the brand’s drive to reach 10,000 locations within this decade.

The first Taco Bell Defy will have a 3,000-square-foot building, with the kitchen upstairs. There is no dine-in seating, though guests have the option of coming in to order from a human or pick up their food, and there will be a few patio seats outside. But the restaurant is designed for to-go business primarily.

One drive-thru lane will be a traditional version, allowing guests to pull in, order off a digital menu and pull forward to pay and pick up. The other three lanes will be for mobile order or delivery pickup.

There will be one entry and one exit to the lot.

Guests will first stop briefly at a preview kiosk to scan a QR code, which will notify the restaurant that they have arrived and direct them to the appropriate drive-thru lane.  Engler expects this process will take about 10 seconds.

Once in the appropriate lane, food will be sent from the upstairs kitchen to cars in about six seconds via a proprietary vertical lift system.

This is a feature that Engler contends is unlike any other drive-thru. “There’s only one word I can describe it with: It’s very cool,” he said.

Others have tried getting food from kitchen to car using various tubes and tracks, but drinks have always been a challenge. Engler said the Defy system solves that problem, with food and drink traveling to cars in an enclosed stainless-steel tube that self-levels to avoid spillage.

Fundamentally, Defy units will require staffing levels similar to traditional restaurants, though people will be deployed in different ways, with more in the kitchen and fewer bodies at the counter. The upstairs windows will allow guests below to see human activity in the kitchen, Engler said.

The cost of a Taco Bell Defy buildout remains to be seen. Engler expects it will be “slightly more expensive” than a Go Mobile unit because of the added lanes, and the additional refrigeration and storage needed for a higher-volume output.

All new prototypes are more expensive, added Grams. You get the first one open, then look at value engineering to scale the concept.

The technology is improving to bring the future to today, added Engler.

“Until recently, a concept like this was not executable because one part or another wasn’t there,” he said. “But now disparate sources are coming together to make it work.”