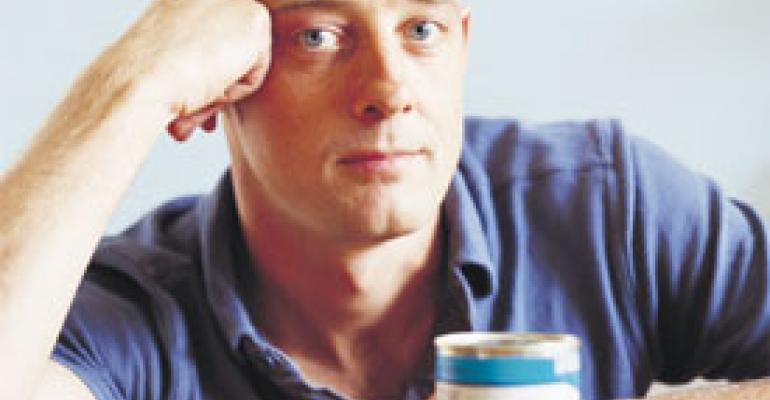 Under the Toque: Tom Norrington-Davies keeps his produce and ideas fresh

There was a week recently when it seemed difficult to open a London paper without reading high praise for Tom Norrington-Davies’ cooking. Food critic Fay Maschler credited him and his partners with “more or less single-handedly bringing astute food to Covent Garden.” Time Out listed Great Queen Street as one of five contenders for the Best British category.

Norrington-Davies, who changes the menu for every meal, is fast gaining recognition for his straightforward yet occasionally surprising fare.

For example, he recently concocted a dish featuring the heart of an ox.

“I buy directly from the farm gate,” he says, and after preparing another ox dish, he found himself left with the heart. He created a separate dish that featured it.

“I hate waste,” he says, “and the heart is a fantastic piece of muscle. The problem with chefs is they buy in quantity. I think if you cook flexibly, you can control the quality of the produce much better.”

Perhaps not surprisingly, local patrons weren’t sold on the unusual ox heart dish, but if the attention and accolades are any indication, Norrington-Davies certainly has the food world sold on him.

You studied drama and spent time dubbing kung fu movies in Hong Kong. What made you move to cooking?

It always was a passion. I didn’t grow up in what I’d call a massively foodie family, but my parents were strict about teaching us to cook. My grandmother was a big cook because my grandfather ran a mission which looked after street kids in England. She cooked for Bob Hope, actually. He was a regular because he used to come entertain. My grandfather just swooped in on him, and they became great friends. The pictures are funny because my grandfather was short and Bob Hope was obviously very tall.

Buy the best you can, and then don’t mess around with it. Let the ingredient speak for itself, and everything else follows. Find what’s naturally in its growing season and hasn’t traveled too far. If you make that your core value, the menu basically writes itself. All the other elements are in place.

How do you manage supply and demand with a daily menu?

I think some kitchens are scared of things running out because they are worried about the reaction, so they keep backups in the freezer. I don’t do that. Everything I use is fresh. I think people are happy to know things run out.

Title: chef-owner, Great Queen Street, LondonBirth date: July 3, 1969Hometown: LondonEducation: University of Wales, bachelor’s degree in dramaCareer highlights: running the kitchen of The Eagle, one of London’s first gastropubs, from 1998 to 2003; contributing to The Eagle cookbook, “Big Flavour and Rough Edges,” 2001; writing “Just Like Mother Used to Make,” 2003, which was listed as a top-five cookbook of the year by the Sunday Times of London; penning “Cupboard Love: How to Get the Most Out of Your Kitchen,” 2005; being a regularly featured food writer for a number of British publications and a guest on Radio 4’s The Food Program and Good Food Live; appearing on a TV program “Great British Food” for The Discovery Channel in 2006; opening Great Queen Street in April 2007, with partners Rob Shore and Jonathan Jones from acclaimed gastropub Anchor and Hope and Michael Bellman of The Eagle.

There are encouraging signs. I like that finally British food is finding its voice, but I’m still worried that there’s too much emphasis on buzzwords like “local” and “seasonal.” It worries me that people are paying attention because it’s fashionable. It shouldn’t be fashionable. I hope they become a set of real, lasting principles.

You wrote an article rating long-life foods, like olives and canned chickpeas, found in the various English supermarket chains. Can you explain?

What’s gone missing from the great English kitchen is the idea of keeping a proper larder. I think shopping sensibly for ingredients that keep means being able to make spontaneous cooking decisions. I don’t think it occurs to most that a tin of tomatoes, if they are Italian tomatoes raised for canning and canned with perfection, is much better than marching into a supermarket in February in search of fresh tomatoes. These days, with food that’s flown everywhere, people are obsessed with freshness.

What shortcuts do you think are unacceptable?

Not resting the meat. Every time someone tells me they can’t get their steaks to be tender, I just know they’re not resting them long enough. You just can’t get away with not doing it.

What’s your opinion of food miles?

I think it is the single biggest issue facing food in the 21st century. If everyone questioned the amount of miles their food traveled, a lot of things would into place. I worry about people who say they only buy organic. I cannot see the point if half the stuff comes from thousands of miles away. It’s about striking the balance, everything in moderation. And I’m a horrible hypocrite, because at this time of year, there’s nothing that will come between me and my Alphonso Indian mangoes.

Your father’s military career meant that “home” was often moved. Do you think this lifestyle influenced your approach to food?

The most underrated piece of cooking equipment is the cheap picnic thermos. It can hold warm sauces like béarnaise and hollandaise absolutely perfectly.

Yes, definitely. We spent time in Germany in the ’80s because my father was part of NATO, and went on holidays in Europe. There was a holiday in Italy when I was 12. I really remember being so taken with the bread and the oil. And then another in Paris. I think those things really stay with you when you’re young. The great thing then was that so often you didn’t know what you were eating. Back in those days, pasta and pesto seemed so foreign. I remember a pizza in Florence and a Camembert in France being mind-blowing. British people just didn’t eat like that.

I miss that sense of discovery, though I experienced it again last summer in Cambodia. It’s great to discover a cuisine you know nothing about, to just put your hands in the air and point to something and hope it’s not going to be too scary.

What was your favorite childhood memory?

Mushroom picking with my Dad at 5 a.m. on camping holidays. And my grandmother’s meringues.

What is your favorite activity when out of the kitchen?

Yoga. That’s the only printable one.

What would you want to say to a young person dreaming of being a chef?

Crib all your mum’s recipes. You never know when they might come in handy.