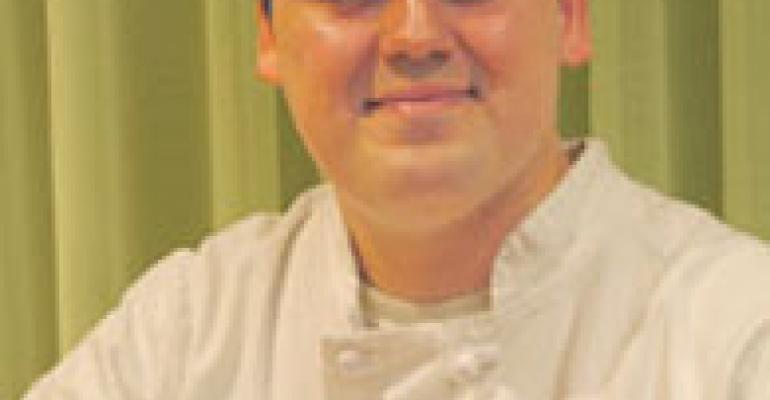 Under the Toque: Moto’s Mr. Wizard dreams up weird science in the kitchen

Arestless chef drawn to both the rigors of hard science and surreal airs of theatricality, Homaro Cantu has made his restaurant Moto one of the country’s premier establishments for avant-garde dining. His menus—some of which are edible, thanks to food-based inks on paper made from soybeans—tilt toward the wilder extremes of molecular gastronomy, and his wily spirit works into service methods that cast waitstaff in dramatic roles. Cantu started at Moto after moving to Chicago to work at Charlie Trotter’s, where he worked for four years and ended up as sous chef. Along with his work in the kitchen at Moto, Cantu helms Cantu Designs, a business devoted to new iterations of tableware, cooking equipment and more.

You’ve said that you used to eat money as a kid. What did it taste like?

Yeah, I used to try to eat coins and dollar bills. I was always putting things into my mouth that were not edible. I’ve always had a fascination with how things tasted, even if they weren’t something you were supposed to eat. I don’t remember what money tastes like exactly, but I do remember tinfoil: I would chew on that and it certainly wasn’t pleasant. It’s not something you want to do in your spare time.

Do you ever dream of food?

I have quite a few dreams about food. When I got married my wife gave me this notepad to write them down in, and those dreams had quite an impact on Moto when we were opening. My wife says that I eat a lot in my sleep; I’m always chewing. I’ve dreamt a lot of inventions. Some are in the works that I can’t talk about yet, but I had a dream about a restaurant with a bunch of robots working in it, and I actually invented a software program from that idea that runs Moto now. It’s far more intelligent than any point-of-sale system out there. It has a 3,800-page patent that we filed for. Basically, it eliminates the accountability of human error in a restaurant. At Moto now, we’re actually joking around now 90 percent of the time, even on a busy night. All of that came from a single dream that I managed to write down.

Do you dream of flavors or dishes?

Imagining flavors is the easy part, but linking them with something that has nothing to do with the same flavors—that’s the hard part. The transmogrification of flavors into new forms is really the challenge. Anybody can take “pizza” and put chocolate on it, make the chocolate look like ground beef, and then make “cheese” out of frozen grated mango purée, so you have something that looks like pizza melting but is actually a dessert.

You work in a number of different disciplines outside of the kitchen. What do you like about the specific process of cooking?

Always use seasonal products that actually taste like what they are. If you serve a tomato, make sure it’s the best tomato it can be.

I was a terrible student in culinary school, just to make that clear. I actually had to retake nutrition, which was the most scientifically minded class of the entire curriculum. That’s not something I’m proud of, but it just wasn’t something I was interested in. What really drives me to cooking is that I can do whatever I want. If I had all the money in the world, I’d build a spaceship for a kitchen. That would be the end result, I guess. But for now I just like working with people who really love what they do.

What did you learn from working with Charlie Totter?

Definitely attention to detail and how to manage a restaurant at a higher level, under a magnifying glass. It’s no secret that it’s a challenging place to work, but I learned how to keep my vision from day one until the day I left. I went into the back door every day with the mentality that I was going to remember why I came here in the first place and never forget that. If you give just 99 percent, it will be seen and you will feel it. It’s like going to boot camp. Some people like it and some people can’t stand it. But it’s an exciting place where something big is happening all the time, and that air of excitement is something I tried to take with me to my restaurant.

What other influences play into your food more indirectly?

How does Stephen Hawking factor in?

The understanding of theoretical physics and all that is possible out there. I’d say if eight out of 10 restaurants close in the first year, then there has to be a whole lot more possible than we’re doing right now. On a business level, on a creative level, on a science level, there’s just so much more to explore. We’re just scratching the surface still.

Have any of those influences worked directly into specific dishes?

There are a lot of songs by Frank Zappa that have food references in them; unfortunately, they also have lots of drug references that I can’t talk about—I don’t want anybody to get the wrong idea. We actually have food paintings by Salvador Dali in our kitchen. And M.C. Escher did a sky and water print that we turned into a dish that we printed up [on edible paper] with our food-printer technology to taste like surf and turf. So the correlation of science and art, math and music—all of those things play a role in what we do. No matter how much science you know, you still have to be creative to think outside the box. Einstein, I think, once said, “Knowledge without imagination is useless.”

What is one of your favorite ideas that just didn’t work in the end?

There was one dish we made all black: It looked like we had left it in the oven for 24 hours, like it turned into charcoal, but we made the flavors of it all really bright. We pigmented everything black with squid ink, so people’s mouths would turn pitch black as they ate it. This was all very amusing to me, but a lot of the ladies who would come into the restaurant were appalled. We’re in the process now of making something that looks like a lava lamp. It’s a drink that is actually a Thai curry, with bubbles that go up and down while it sits on the table for about 15 minutes. The initial feedback was that it tasted just kind of so-so, but now that we have the completed version done, people are going nuts over it. I had made it twice to get the actual physical properties of it to work, but the flavors and I guess what you would call the “desirability” of it took another week to get down.

You’ve devoted a lot of time to developing cookware products of your own. How does that tie in to what you’re doing with the idea of food?

I look at it this way: Cooking has remained the same for a very long time. We’ve been cooking in metal pans with materials that have very finite life spans. As the price of a sauté pan reaches $100, we need to find new materials that are more abundant. I look at cooking as the elimination of all nonrenewable materials and replacing them with new materials and cooking methods that work for very cheap. The true art of cooking is the transfer of heat or the transfer of energy, so we can really cook with anything—anything you can plug in the wall, anything that is solar-powered, thermal heat, FM radio signals, microwave signals. We can do a lot of cool stuff. And all of this has to do with not just cooking but healthy cooking. Cholesterol damage to the heart kills more people than anything in the U.S., but what you hear about is maybe SARS or bird flu. I think we need to fix the problem at home and make devices that naturally cook things in a more healthy way while making them more delicious. We have to think in terms of the robot in the restaurant.

What about the loss of certain nuances in the art of cooking?

First we have to understand the problems. One of the problems with the current way we cook is high energy prices, so we have to cook more efficiently. Then there are higher material costs—aluminum and iron will be extinct within, say, three generations, so what do we do? And how do we make food more delicious at home while following the first two? How do we kill three birds with one stone? There’s really a kind of triple bottom line going on now: You have to take care of your own people, you have to take care of other people on a social level, and you have to make money to work as a business.

How would you describe the atmosphere in your kitchen?

I’d say it’s a fun playpen where people are encouraged to play around and be themselves. It’s probably the most exciting job that nobody can talk about. [Laughs.] Everybody who comes to work here has to sign a four-page NDA [nondisclosure agreement], if they step into the kitchen for a week or a day or just 10 seconds.

What are you working on now that has you most excited?

Right now we’re working on a birthday cake that is actually a self-inflating balloon. It involves really cold temperatures and expanding gases. It’s a real balloon but you swear you’re eating a real birthday cake when it goes down.