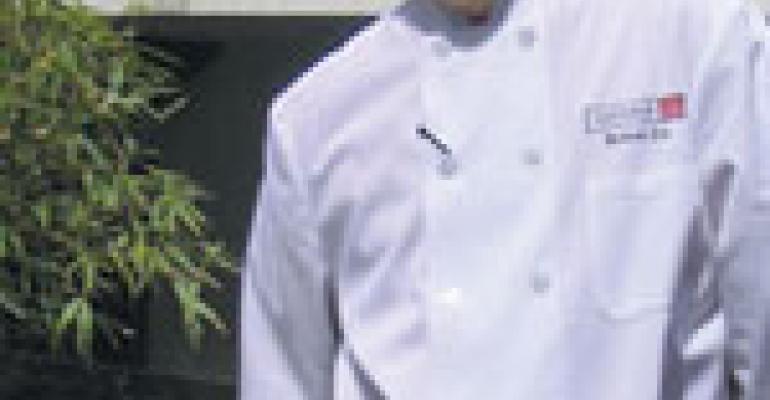 Richard Lee’s culinary career did not begin particularly auspiciously. His first full-time job in foodservice was as a pasta cook at Rocco’s on 22nd Street in New York, the ill-fated joint venture between celebrity chef Rocco DiSpirito and restaurateur Jeffrey Chodorow that was created for a reality TV show and closed shortly after the end of the series.

But Lee quit before that happened and found his way to Geisha, a high-end Japanese-inspired restaurant in Midtown Manhattan, where he started as a fish cook in December 2003.

Last September, at age 30, he became the restaurant’s executive chef.

It was overall not fun at all. It was really crazy, not just because it was busy, but because it was not organized all that well. I think it was busy because of the TV show, but I think it was disorganized because they didn’t take the time to set it up and think about how busy we were going to be, especially my station. I had almost half the menu—twelve kinds of pasta and a different sauce for each one—so it was an endless combinations of things.

But it was probably the best learning experience I could have because I was forced to become a monster as far as prep goes. Making two stocks of Rocco’s mom’s marinara every day and putting out 200 to 250 plates every night made me an incredibly strong cook, which is the first step for any chef. It was like swinging a baseball bat with a donut on it—everything is easier after that.

But it was good, though. I mean, having cameras around all the time, and not just our cameras. Entertainment Tonight would show up unexpected. Sometimes we wore hidden microphones, and we’d have signals we made to people before they started talking to us.

You also got to be in a credit card commercial, right?

We just kind of stood around for 10 hours a day, drinking bottled water and eating sandwiches, and once it came time to film our scenes we just acted like we were cooking for two minutes, and they would say ‘cut’ and do it again. It was really a lot of money because it was a national ad campaign. It was worth about three months of wages in one shot.

And that’s when you quit?

Well, not right away. I waited until the first season was over to see if it would settle down. But on a daily basis it was very stressful, which is why I ended up leaving. And the food was OK, but there was no way I was looking for a career in casual Italian food, and seeing I was already late in the game, 24 years old, I was thinking I needed a change of scenery right then.

And now you’re ahead of the game.

It’s been crazy here at Geisha. I’ve had an accelerated learning process at this company. Sometimes I wish that I could have worked a few more places to see different ways of doing things, but it also leaves it up to me to figure out those ways.

Culinary school was good for me in terms of learning, but it was also a confidence booster doing well in class. Some people tend to underestimate the value of culinary school and some people overestimate it. I think anyone who wants to be a chef should definitely go to culinary school, or at least work in a lot of kitchens and work extra hours without being paid, to learn.

There are certain little things that you learn in school that you have to have, like cleanliness and where you should put your knives and how you hold them. You usually have one day to trail in a kitchen and do your job, and if you do something as basic as hold your knife wrong, you’re definitely not going to get a job. But even people with two years at the [Culinary Institute of America], I’ve seen them not have the instincts to do the job. But it’s expensive, so I can understand why people don’t want to do it.

What if they started out as a dishwasher and worked their way up the ranks?

You could definitely do that, but you have to be willing to tell the chef why you want to be a dishwasher and be willing to come in two hours early and learn things. If you’re a dishwasher, the chef’s going to want you to be in the dish pit doing your job. But it’s a good way to at least let the chef get to know you and know your personality.

Iguess it’s a question of whether you have time or money?

Or a lot of energy. If you can sign up for an eight-hour shift and work an 11-hour shift and use those three hours to help, and just show yourself and learn…

What’s the labor market like in New York these days?

It’s OK. If I have a spot open in the kitchen I just go to Craigslist and post a $25 ad online. I usually get 16 to 18 résumés. I’ll sort them, call four back, maybe get in touch with three and ask them to trail. One won’t show up, and of the two who do, I’ll get one I like.

One just won’t show up?

Yeah, because no one wants to work for free. Usually they’re coming off of a couple weeks or a month off. That’s when cooks take vacations, between jobs, and it’s hard to come in on that day and work for free.

All the clichés are actually true: Stay neat and organized, stay in your space and keep everything squared away. It not only gives the chef a good impression, but also makes your job easier.

But cooks differ. The Latin guys want a check every week, and they come in and are usually reliable and take instruction well. Then there’s the culinary school person who’s looking for advancement or a year of something on their résumé. Both categories have their ups and downs depending on what you’re looking for in the position. Sometimes you’re not looking for input because you [already] have two sous chefs and a lead line cook.

I’m always open to people trying things if that’s what they want to do, or if they want to learn to do something that’s not on their station and I tell them to come half an hour or an hour early, they’ll usually do it.

But sometimes you just want people to come in, chop their vegetables, do their jobs?

Yeah. The morning crew is usually the come-in, do-the-job, get-paid kind of crew, which is great for that. They’re very consistent and they do probably half the prep for the dinner guys. The evening crew is more the ones who want to move up after six months, try management and ordering. Which is good because more unexpected things happen in the evening. I tend to cross-train the night crew a lot because usually one station or another is getting killed, so I like to be able to bring someone over from someplace else.

Is there anything that has surprised you about being an executive chef?

I think I went into the job thinking we have a front of the house, a bar, a door, a pastry chef, a sushi bar, and I thought my job was the kitchen. But it doesn’t really work that way. The executive chef here is kind of expected to look over everything. But that’s good for me, too. The last thing I wanted to do was be executive chef and stop learning.