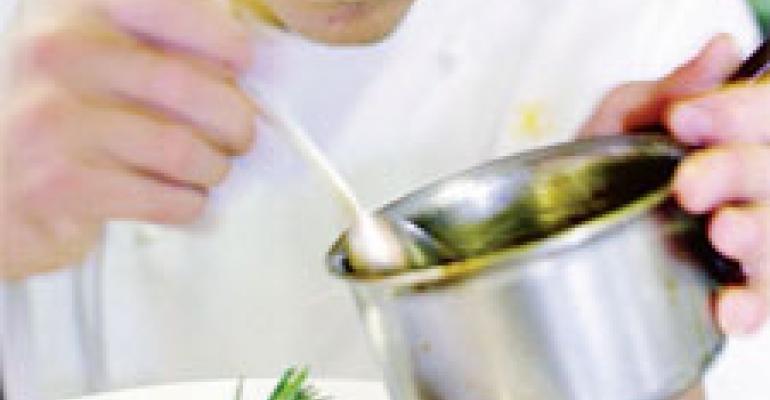 UNDER THE TOQUE: Cavagnini looks for honesty, punctuality in his Italian kitchen

Adriano Cavagnini’s passion for food and his enthusiasm for the ever-changing demands of hotel dining are perhaps keys to his striking reputation. Many international critics consider him one of Italy’s top chefs. Frommers describes him as “brilliant, creative, and dynamic.”

Having launched his haute-cuisine career in London, where he was executive chef at The Grosvenor Hotel at age 27, today he is executive chef at Eden Hotel, one of Rome’s most adored properties, where his restaurant boasts views of central Rome.

Your ancestors founded a restaurant on Lake Garda in 1885. What did you learn from them?

Yes. My great-grandfather cooked, then my grandfather, then my mother in the ’60s. We sold it in 1996 after my father died. It was an old restaurant, nothing fancy. The specialty was braised wild hare with pasta. We had the restaurant downstairs and lived upstairs. I grew up in the kitchen, watching my mother cook. It was like watching something really fantastic. I was in the kitchen at age 4. At 12, I did my first cooking course. At 14, I started to work. In Italy, you worked in the summers, so I worked in restaurants. I had a passion for it from [a very young age], but at 19, I stopped. I thought that was not the life—the hours. I had a couple of years of crisis, but then I started traveling and my passion for food came back, working in nice places, learning languages, meeting different people and cultures. That’s what made me find it again. I love to cook traditional food from my area, like risotto.

How did your career evolve?

When I started to travel, I spent seven or eight years working with chefs in Switzerland, Argentina, Brazil, Monaco, Italy and London. That was when I really built up my experience. I was very interested in learning everything about everywhere. Then, at 27, I was in the right place at the right time. I was offered the job of executive chef at The Grosvenor House in London, a five-star hotel. That was when my career really started.

What draws you to hotels?

I love it. I love producing food every day for an operation like this. It’s one of the great spots for food in Italy, in the center of the capital. I love living the hotel life from the inside, being here all day, ready to do everything. This is not just a restaurant kitchen with hours and a menu. Here you have different things happening every day. You expect things to happen from morning till late night, in the bar, room service. People want all kinds of things. It’s being ready for every situation that I like, living every moment as it comes. For example, tonight I have to prepare a lentil soup with a cream base for some Arab guests who are in Ramadan. We don’t have lentils as we aren’t in the winter menu, so I’ve sent someone out for them. You just go with it, and you do it well because that’s what we do.

Title: executive chef, La Terrazza, Eden Hotel, RomeBirth date:March 11, 1970Hometown:Brescia, ItalyEducation:Caterina de Medici Desenzano Professional Hotel Institute, Lago di Garda, Brescia, Italy, 5-year chef’s diploma; advanced pastry and bread course, Le Nôtre, ParisCareer highlights:being executive chef at Eden Hotel and earning a Michelin star; being part of a group of 100 restaurants worldwide that serves risotto year-round; earning The Prix Villegiature’s award for Best Hotel Bar in Europe in 2005 and 2006, and the Grand Prix for the Best Hotel in Europe in 2007; and being a part of Adriano at La Terrazza at The Grosvenor Hotel in London from 2000 to 2003

What’s the most important lesson you learned on the road?

Organization. We live in a world here in Italy where organization is perhaps not the best. I think it’s really important for a chef to be clean, tidy, ready to do different things, on the ball and on time. We miss a lot here: service, suppliers, customers, reservations, consistency. We’re not organized as a culture. We can do the best dish, but we create it and then maybe we can’t produce it again. In a kitchen, that’s important. You need to get people to produce your creations consistently. To do that, you need a system. Maybe I’m a good chef, but if I cannot get others to do the same thing, it’s tough. I’m also very proud of my languages. I speak English, French, Portuguese and am OK in Spanish. For me, being able to communicate with people in their language, it gives you everything.

You have a reputation for serving particularly fresh, seasonal food—even for Italy. How does one get that edge here?

We have a very good relationship with our suppliers. We meet with them daily. We had an hour-long discussion this morning about eggplant. And white truffles are coming into season, but this year is difficult as it’s been very hot and dry.

What do you think of the new trends in cooking?

We try to be simple. We offer a combination of classical, traditional and some innovative concepts. I was in London until 2003, and people were looking at very innovative concepts, but now I think they are turning back to traditional concepts. They work every day, and that is what really pays off in terms of customer satisfaction. One of our classics is a grilled-seafood platter with Mediterranean fish and shellfish. We also serve tuna tartare with an unripe pear and mustard ice cream. And we have a lot of foreigners who just want pasta with tomato sauce. Businessmen and high-profile guests tend to want the simplest dishes, but simple still requires work to prepare well.

In London, you cooked for [Mohamed] Al Fayed as well as members of the British government. How come?

Cut herbs at the moment you are using them. Never prepare them in advance because the flavor goes so quickly.

I was at Harrods in 1993 when they opened a new high-tech kitchen two floors underground. The executive chef was Jerome Dutois. I had a lot of French influence in my career. I think that base is important. Next to the chef’s office there was a big dining room, very expensive. Mr. Al Fayed used to come a couple of times a week. He wanted Italian, and I was the only Italian, so I started cooking pastas for him. I did it once, twice, three times, and he started coming more and more for pasta. A few times I did private dinner parties for him. The government people were there because there were hotel apartments where members of Parliament lived. They all became passionate about my pasta. [Former Prime Minister Tony] Blair was around then, and Gordon Brown was one of my very good customers when he was chancellor [of the exchequer]. I met them all. Sean Connery lived nearby. And [Robert] De Niro comes to the Eden. There was one lunch when he ordered eight different pastas.

What do you most admire in another person?

Arrogance. And lateness. I’ve been going to work one hour early my whole life. I love when people arrive a little bit early. Unfortunately, in Rome, being late is normal. For an appointment at 10, they come at 11. The first six months, I don’t think I saw a single supplier because they were always late, and I would send them away. I finally decided that I better see them when they come or I never would.

What do you do when you’re not in the kitchen?

Mountain sports and running. I’d love to a write a culinary book for sports people.

What’s next for you?

I’d love to have an old farm where I can produce food and give cooking lessons, later, when I retire. Nothing professional, just fun, easy and nice. Maybe an old farm on a lake, with a few rooms, a morning cooking lesson, an afternoon trip to Venice. Something like that.