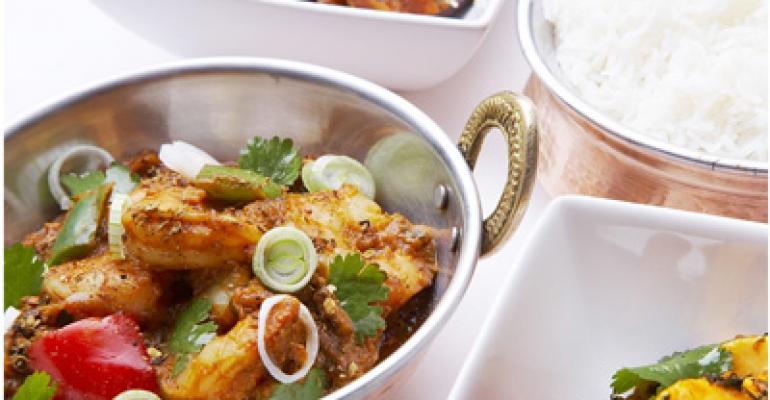 Hoping to do for Indian food what P.F. Chang’s China Bistro did for Chinese, the London restaurant Tamarind is scheduled to make an American debut in Southern California in October.

Located in London’s Mayfair district, Tamarind is one of few Indian restaurants in the United Kingdom that has earned a Michelin star. Owned by Indian Cuisine Ltd., the fine-dining concept will be translated to American audiences as an upscale-casual brand.

While U.S.-based restaurant companies have been looking overseas for growth opportunities, Tamarind joins a small-but-growing handful of Europe-based chain operators coming to America. Others include the pan-Asian Wagamama chain out of London, the Italian fast-casual Vapiano from Germany, and Obika Mozzarella Bar from Italy.

Planned for the tony Crystal Cove Promenade in Newport Beach, Calif., the U.S. concept will be dubbed Tamarind of London.

Hiatt said the menu will follow the traditional but innovative cuisine of the London location, which is based on the Moghul cooking of Northwest India that favors tandoor ovens. Because of its coastal location, the U.S. restaurant likely will lean toward seafood dishes, as well as spices and flavors that might better suit an American audience.

Shachi Mehra, formerly of New York’s now-shuttered Tabla restaurant, will helm the kitchen at Tamarind of London. She has been developing the menu in London with the original restaurant’s executive chef, Alfred Prasad, Hiatt said.

Although mom-and-pop operators have long represented Indian cuisine in the United States, there is room for a breakout ethnic chain that makes such flavors more accessible, as P.F. Chang’s did for Chinese food, Hiatt said.

But Hiatt said the chain would not likely grow to 150-plus locations, like P.F. Chang’s, because Americans don’t eat Indian food as frequently as they do Italian or Chinese — yet.

Tamarind of London, however, will be a notch above P.F. Chang’s in the upscale-casual realm, similar to Il Fornaio, he said. Tamarind’s dinner check will average about $33.

The 4,500-square-food restaurant will have about 140 seats, along with a bar and enclosed patio.

Hiatt said the company chose to expand in the U.S. because the group already has other non-restaurant business interests there.