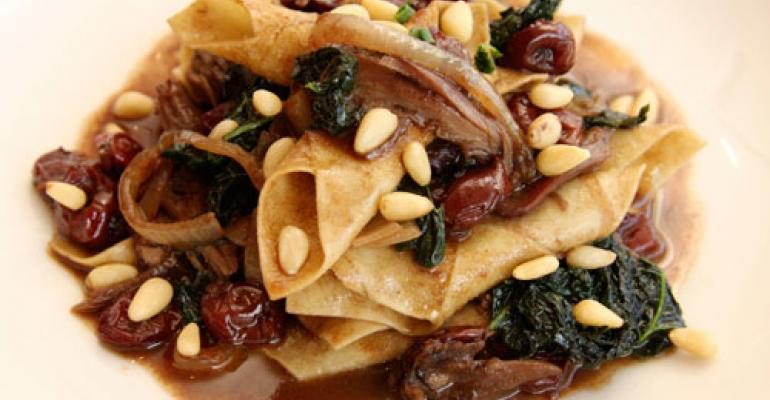 A touch of Tuscany in Northern Italian food

Talk to Italians about their country’s best cuisine, and chances are they’ll point you to the region of Emilia Romagna in general and its capital, Bologna, in particular.

They tend to sneer at Tuscan food, a cucina povera — cooking for the poor — with its emphasis on beans, its unsalted bread and harsh oil made from olives harvested too early to suit the tastes of most Italians.

But American chefs cooking northern Italian food often look to the home of Dante, Michelangelo and Leonardo da Vinci for inspiration, even when they’re not supposed to be.

Michael White, the famed New York chef whose Italian cooking at Fiamma, Alto and Marea have won him praise and honor from many culinary circles, recently opened Osteria Morini to focus solely on the cuisine of Emilia Romagna, where he spent seven formative years cooking.

White dismantled his sister-in-law’s farmhouse outside the Romagnola town of Imola and used it for his new restaurant. “You really feel like you’re in a trattoria in Bologna,” he said.

But the food he ultimately offered was really Tosca-Romagnola, he admitted. “There are some Tuscan items, too,” he said.

In fact, the rich cuisines of Bologna — which bears the nickname “La Grassa” because of the fat used in its cooking — and the region surrounding it are not diametrically opposed to the ostensibly rustic cuisine of Tuscany, which shares a long border with Emilia Romagna.

“If you’re doing a very thin veal chop with sage and garlic, that could be construed as Romagnola or Tuscan,” White said, noting that both regions use plenty of sage, garlic and rosemary.

Tuscan cuisine often is also considered to be opposite to that of Piedmont, the wealthy Italian region bordering France and Switzerland. Piedmont is home to refined Barolo, Barbaresco and Barbera wines. Its signature pastas are tiny, stuffed, labor-intensive agnolotti del plin, and tajarin — pronounced tie-ya-REEN — Piedmontese dialect for tagliarini. Cooks in the region compete to see how many eggs they can kneed into the ribbon-like pasta before cooking it and showering it with Piedmont’s other signature ingredient, white truffles.

“[Tuscan and Piedmont cuisines] are not so different that they can’t be on the menu together,” said Antonio Bettencourt, chef of 62 Restaurant & Wine Bar in Salem, Mass., which features dishes from both regions.

And there are some odd similarities in phrasing, Bettencourt said.

For example, Piedmont has vitello tonnato, which translates roughly as “veal that has been tuna-fied,” while Tuscany has porchetta tonnato, or “tuna-fied” pork.

Vitello tonnato is cold cooked veal, sliced thinly and dressed in a sauce made of canned tuna and either mayonnaise or cream.

“It’s weird on paper, but people really love it,” said Bettencourt, who adds his own flourish by topping it with pickled shallots — something you wouldn’t see in the dish’s native land.

Porchetta tonnato, by contrast, is pork loin that’s cooked and then packed in olive oil, “more in the style of tuna,” he said.

Bettencourt’s signature dish would not actually appear in either Tuscany or Piedmont, but it draws inspiration from both, he said. It’s garganelli pasta with red wine-braised duck, dried cherries, pine nuts and Tuscan kale. He also adds cocoa to the braising liquid for some added bitterness.

“That’s not something, to my knowledge, that you would find in Italy, but if it were from anywhere, I’d give the nod to Piedmont, since it’s a little bit richer and luxurious,” Bettencourt said. “If you wanted to use Barolo in this dish, it would fit very well.

“But you could also point to Tuscany,” he said, “because of the black kale, and because of the Medici’s ability to find obscure ingredients like cocoa and dried cherry,” he said, referring to the family that ruled the Tuscan capital of Florence during the renaissance. “And duck is popular in both regions.”

“I basically have to base it on my palate,” he added. “Whether it’s Piedmontese or Tuscan, if I like it then I take a bet on whether my customers will like it.”

“We’re right here on the water, so we’re cooking lots and lots of fish, which isn’t always indicative of Tuscany,” said Vedrinski, whose restaurant is named after a land-locked city in the region.

But the Luchese do use a lot of river fish in their cooking, so Vedrinski applies techniques from Lucca to the seafood that available in South Carolina.

For example, he poaches artichokes in olive oil from Lucca, makes a sauce from Tuscan white wine and serves that with flounder.

“I think of that as a summertime dish you’d see in Lucca, but with river fish,” he said.

He said that, although some Tuscan olive oil can be too aggressive for fish, “it’s just like wine. It’s all distinct and you can find oils that work.”

Vedrinski said when he visited Lucca, the city was not yet touched by tourists and there was a purity about the place that he wanted to emulate.

“We have phenomenal black bass that comes off the coast, and we use cinghalle [wild boar] all winter that was shot 20 minutes from here. We slow-cook it in Chianti and make ravioli out of it,” he said.

When oyster mushrooms are in season, he sears them and serves them over locally sourced poached eggs with caramelized onions and vin cotto, or cooked grape must.