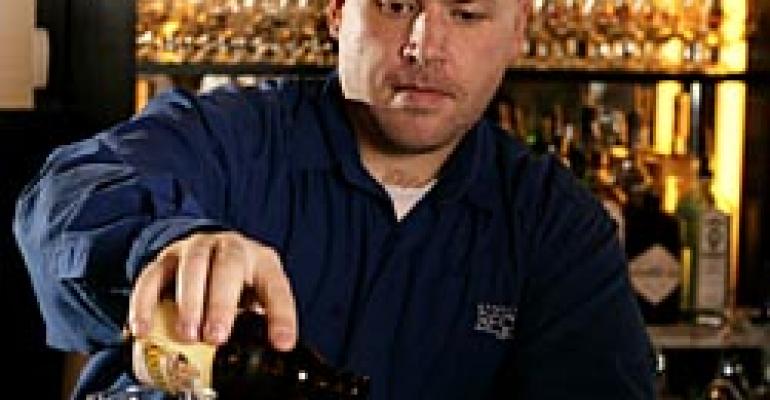 Tis the season for seasonal brews

Some restaurant operators — hoping to give beer lovers a stocking full of cheer and boost their own coffers in the process — are promoting holiday and winter seasonal beers with elaborate lists and beer-and-food events. Such initiatives are in keeping with the festivity of the season, the rising prominence of quality brew and a seeming co-ed trend of beer appreciation that sees both genders hoisting pints together.

Asign of the times is the high esteem for craft beer shown in the recent "What's Hot, What's Not Chef Survey" by the National Restaurant Association. Almost three-quarters of the survey's respondents, all members of the American Culinary Federation, deemed craft beer "hot." Overall, it ranked sixth on the top 20 list of hot food and beverage trends, just behind specialty sandwiches and ahead of sustainable seafood.

However, at Brasserie Beck in Washington, D.C., formidable holiday brews are No. 1 at this time of year. Beer specialist Bill Catron sports an almost exclusively Belgian lineup. "For the Belgians, Christmas is the biggest time of the year for beer," said Catron, who noted that his seasonals make some patrons feel "like a kid in a candy store." The Belgian assortment includes Serafijn Christmas Angel, Fantome Hiver, Fantome Noel, Delirium Noel, St. Bernardus Christmas Ale and Scaldis Noel. The one exception to Belgian rule is a 10-year-old keg of Samichlaus, an Austrian strong winter brew that Catron plans to tap during Christmas week. Draft brews are priced around $8; the Samichlaus will probably fetch $13.

Bold flavor statements are the common denominators of brews like the above. "Generally, these are bigger, darker beers that really fit the season," said John McDevitt, chef-owner of the High Street Grill in Mount Holly, N.J. "They can be anything from Belgian styles to double bocks to dark wheats, like Aventinus, which technically isn't a Christmas beer but works really well at this time."

At Rustico Restaurant & Bar in Alexandria, Va., beer director Greg Engert sees a trend of U.S. craft brewers capitalizing on the interest in winter seasonals by releasing a Christmas-themed specialty beer early in the holiday season followed by a barleywine, a type of dark, extra-strong ale, before winter is out. "They're splitting the season," said Engert, and in turn some operators adjust their beer lineups.

Given the current level of interest, some operators have made beer tastings and events major pillars of their concepts. At High Street Grill, McDevitt features 10 craft beers on tap and a monthly beer lunch. "It's a good way to fill my seats on a Saturday afternoon, when it tends to be slow, and bring in $1,500 to two grand," he said. "It's probably the best way we've gotten new customers."

At press time, McDevitt was preparing for his fourth annual Holiday Ales Beer Lunch with four courses of food and four special brews, priced at $45 per person. One of the prime pairings will be Troegs Mad Elf, a Belgian-style holiday ale from Pennsylvania made with cherries and honey, along with Stuffed Pork Loin with Roasted Shallots, Pears and Maytag Blue Cheese.

Also hitching itself to the craft beer star is Pacific Standard, a 3-month-old pub in Brooklyn, N.Y. Co-owner John-Christian Rauschenberg used the phrase "microbrew fanatics" to describe himself and his partner, Jonathan Stan. "It's great to pick out our own beers and show people the ones we like. I personally get really excited, because some of these, like the Anchor and the Sierra Nevada, are different every year."

Although according to stereotype, beer appreciation is a testosterone-steeped affair, that's not the case, according to some operators. For instance, the gender skew of High Street Grill's beer lunches is "pretty split down the middle," McDevitt said. "It's a lot of couples."

Rustico's beer dinners, too, draw "couples and lots of women," said Engert. "A lot of women are getting into great beer. Some of them have husbands who are more into wine or mundane beers."