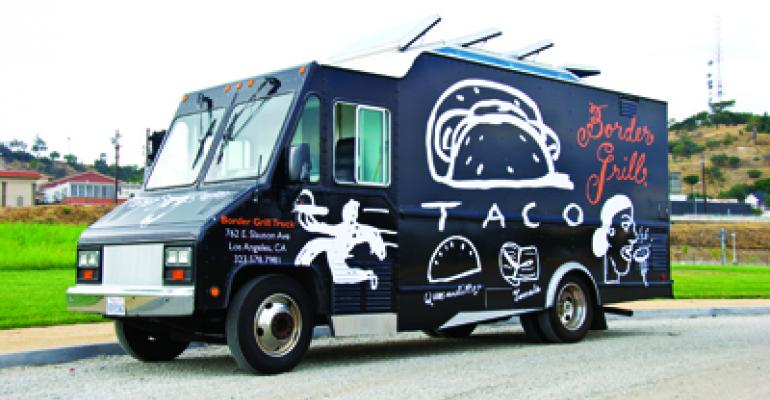 The food truck phenomenon still has plenty of room to grow, according to new consumer research showing positive perceptions of mobile food vehicles both from customers and those who have yet to experience roadside dining.

Chicago-based market research firm Technomic Inc. found that 91 percent of survey respondents familiar with food trucks said the trend has staying power and is not just a passing fad. Only 7 percent of those consumers polled said they would decrease their visits to food trucks over the next 12 months. The biggest reason non-users of food trucks cited for not frequenting a mobile cart was hesitation over buying food from a vehicle. Technomic surveyed 500 consumers in the first quarter of 2011.

Kevin Higar, a director at Technomic, said food trucks could be far from approaching their peak in popularity, given the number of American consumers who live in areas without them or who have yet to try food trucks.

“The key for long-term success is getting the non-user to come on board,” Higar said. “One in five individuals is not aware of or has not seen a food truck, and one-third of individuals who are aware of them still haven’t purchased from one.”

Seventy percent of non-users are hesitant to purchase food from a vehicle, which Technomic’s report indicated would be the greatest challenge to the trend’s growth.

Location is critical to the success of food trucks, as 61 percent of consumers “just [happen] upon them.” Social-media tools like Facebook and Twitter remain important for marketing these mobile restaurants because consumers who follow food trucks on social media are heavy users: 84 percent of them visit food trucks once a week.

Food truck fleets may draw diners away from competing quick-service concepts — 54 percent of food truck customers said that if they had not purchased a meal from the truck, a fast-food outlet would have been their likely destination. But it’s not always bad for fellow food trucks. Three-quarters of consumers who encountered a food truck gathering purchased items from multiple operators.

While long popular in the more food-centric coastal cities like New York and Los Angeles, and tech-savvy towns with a hip food scene, like Austin, Texas, food trucks are now proliferating across the country.

Chicago is one exception. The city does not allow food to be prepared in a mobile kitchen, but operators can sell food from a vehicle if it is prepared ahead of time in a brick-and-mortar kitchen or commissary. City officials are debating whether to lift the ban and allow the likely rush of new food trucks, and Mayor Rahm Emanuel has voiced his support of ending the ban. Elsewhere, newspapers have covered growing food truck scenes in Minneapolis, Cleveland and Louisville, Ky.

Unwilling to cede all mobile territory to upstarts, some established chain restaurants — Sizzler, Gold Star Chili, Qdoba and Dairy Queen — have kicked the tires on their own food trucks as sampling and test marketing vehicles, billboards on wheels, or new revenue streams in areas where brick-and-mortar restaurants aren’t economically viable.