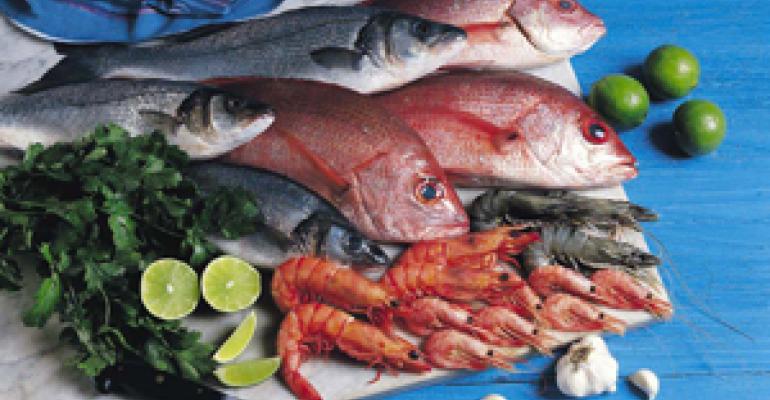 Seafood items that saw growth in 2011 were popular staples prepared in hearty or comforting ways, or seafood acting as a canvas for bold flavors, such as smoky or spicy flavors.

According to information on various seafood-related menu parameters pulled by research firm Datassentials, tilapia held the spotlight for growth in menu appearance between 2007 and 2011. The seafood item saw a 58.4-percent growth in those five years. The popularity of tilapia can be drawn to the fish’s versatility, as it can be prepared in a variety of ways that may not work with more delicate fish, such as baking or grilling.

Other fish that are more forgiving when it comes to preparation techniques also made the top growth list, including mahi-mahi, haddock and sea bass.

Datassential monitors menu trends at more than 4,800 restaurants across the United States.

In a listing of fastest-growing menu terms related to seafood, Datassentials also tracked descriptors listed on menus for growth between 2010 and 2011. “Crispy” and “encrusted” took first and second place with an annual percentage growth of 23.3 percent and 11.3 percent, respectively. Those menu descriptors not only mirrored food trends driving comfort and indulgence, but also showed a connection with the popularity of sturdier fish. For example, haddock can be prepared battered and fried in fish and chips.

The first and second seafood entrée item in 2011 of “panko crusted” and “taco” could also give clues for the popularity of these particular fish types, since panko, a coarser Japanese-style bread crumb, has been gaining favor with chefs for its unique crunchy texture. The rising popularity of fish tacos, or “tacos de pescado,” usually requires grilled or fried chunks of fish.

Ahi, or yellowfin tuna, also ranked high in a list of top growth seafood items, which corresponds with Datassentials findings that show growth in Asian preparation techniques and ingredients on seafood menus.

In a list of top seafood entrée items in 2011, Asian cuisine items like sushi, sashimi and the tuna-specific tuna roll and tuna sashimi made appearances. In a list of the top growing seafood preparation terms, tartare was number one, with 25.6 percent growth in use from 2010 to 2011. Seared came in at No. 7, with 9.3-percent increase in use. Tartare and searing are both popular preparation methods for ahi tuna along with sushi and sashimi.

While not ranked as a large growth item, fried calamari was the No. 1 seafood entrée item on menu listings in 2011, appearing on 16.3-percent of menus surveyed.

Hot and spicy were most frequently listed for sauces and flavors that saw an uptick in restaurant menu listings for seafood. Out of the top 10, four of the flavors listed were jalapeño, horseradish, chipotle and wasabi.

The list of top seafood descriptors in 2011 also highlighted other growing food trends, such as smaller portion sizes (“bite,” “mini” and “petite”), and increased consumer awareness of sourcing and sustainability in seafood (“seasonal” and “wild”).