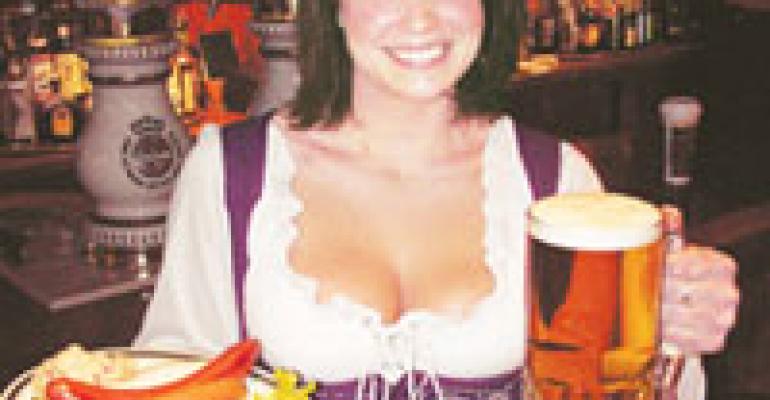 Sitting in his office above the fudge shop, next to the haus his forefathers built, Geoff Schmidt explains his family’s uncomplicated management style for Schmidt’s Sausage Haus und Restaurant, a dining staple of German Village in Columbus, Ohio.

“I don’t want to screw up what past ancestors have done,” he said. “My mission in life is to get it to the next generation, which is cool.”

Five generations of Schmidts have worked for the restaurant, including Geoff’s son and nephew, his two brothers and three sisters, and his 88-year-old father. The business has grown from a meatpacking house begun in 1886 to the restaurant, started by Geoff’s father George in 1967, to its current model that also includes banquets, catering, a fudge shop and now mail order.

He credits the trust Schmidt’s has built in Columbus — and in German Village in particular — for making it through a recession that hit the city harder than past downturns.

“Because we’re an ethnic restaurant, we don’t think we have to change things very often,” he said. “Consistency would be our mainstay. If we had a corporate mission statement, which we don’t, it would be to meet expectations of our customers and not our own.”

There was, however, a “corporate period” for Schmidt’s, back in the early 1990s, when the company brought in outside directors and became “more form than function,” Schmidt said. At the time, he said, Schmidt’s was logging about $3 million in annual sales but had all the regional managers, human resources and information technology departments, and marketing experts of some $200 million company. The family members felt out of touch with Schmidt’s heritage, observing from the “ivory tower” above the fudge shop, and ultimately decided to regain complete control over the business.

“We had the insight to get rid of them, finally, and to go back,” Schmidt said. “We were strong enough with good products in key areas to turn it around in two years by going back to basics and what Dad set up.”

Geoff’s father got out of the packing business in 1965, but had always marketed Schmidt’s sausages at the Ohio state fair. He converted a livery stable into Schmidt’s without any knowledge of or expectations for the restaurant business.

“Hence the name Schmidt’s Sausage Haus und Restaurant,” Schmidt said. “[My father] was going to make sausages in the back and sell them out of a small area in the front of the restaurant. While you’re waiting you could sit down and have a sandwich. It was about two or three weeks before he figured out the restaurant was going to be the big thing, and that’s what ended up happening.”

Russ Arledge, office coordinator for the German Village Society, said Schmidt’s was one of the earliest family-run businesses to arise out of the revitalization of the neighborhood, which just celebrated its 50th year.

“Almost from the very first day they opened, Schmidt’s was a huge hit,” Arledge said. “There was no place in all of Columbus where you could buy a German meal, and the bratwurst and Bahama Mama and German potato salad took everyone back to their German roots.”

Every day, he added, somebody will stop him on the cobblestone streets of German Village and ask for directions to Schmidt’s.

“All you have to do is drive by any time, and when you see the line, you’ll know it’s the most popular restaurant in town,” Arledge said. “It’s hard to deny Schmidt’s is an institution.”

Schmidt points out that the family’s restaurant has a few advantages, notably its central location in the state capital, a lack of competition for authentic German food, and a relatively low check average of $16.

Because of its reputation in Columbus, Schmidt’s can devote its modest marketing budget to sponsoring local organizations and targeting tourists through convention and visitors bureaus. It also has gained a younger following since an appearance on the Travel Channel’s “Man vs. Food” show.

Schmidt added that special events and catering are the major profit growth opportunities since the company owns its equipment and uses volunteer help.

Of course, to make improvements in the restaurant, Schmidt likes to break from reading comment cards in the office and do a little research just outside the four walls.

“The sneaky way that I do it is I’ll sit out on the bench right by the exit door,” he said. “That’s the best way to find out what’s going on. You may not make comments right in there, but as soon as you step out you’ll say it all.”