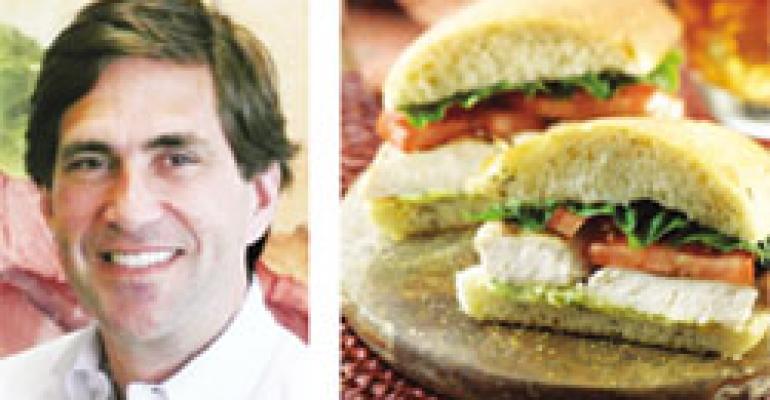 Off to the salt mines

Even though Au Bon Pain has worked to reduce the amount of salt in the 220-unit bakery-cafe chain’s menu items for years, only recently have customers started to request that they do even more.

“We get guest comments every week, especially concerning our soups,” said Ed Frechette, the Boston-based company’s senior vice president of marketing. “They say, ‘Can you give me this soup with less sodium in it?’ I can tell you that kind of comment has increased over the past year and a half.”

ABP is one of many restaurant companies trying to accommodate consumers’ growing desire for more healthful fare and to stay ahead of the mounting cry for salt-related reforms from lawmakers and advocates.

Used as a preservative and flavor enhancer, salt has steadily moved to the center of the nutritional battleground. Most recently, an April report from the Institute of Medicine detailed the dangers associated with ingesting too much salt, including high blood pressure, heart attack and stroke. The IOM recommended that at-risk adults cap their sodium intake at 1,500 milligrams per day, and all others ingest no more than 2,300 milligrams. The average U.S. adult currently ingests 3,500 milligrams daily, the IOM said.

Responding to the report, U.S. Sen. Tom Harkin, D-Iowa, called for new government standards that would “start moving us in the direction we want to go: prevention.” An “intervention would save a lot of money in the future,” he added. “By reducing intake nationwide, we can prevent 100,000 deaths annually and save $18 billion alone.”

The report also prompted the Center for Science in the Public Interest to call for the U.S. Food and Drug Administration to regulate the sodium content in prepared foods. In addition, the New York City Department of Health and Mental Hygiene officially debuted its National Salt Reduction Initiative, seeking to reduce salt consumption by 20 percent over the next five years. The NSRI currently counts among its members 18 national health organizations and 29 cities, states and municipalities as well as four restaurant chains: ABP, Starbucks, Subway and Uno Chicago Grill, which all have pledged to lower the salt content in their foods.

At ABP, the goal is to get below 900 milligrams of sodium per soup serving whenever taste is not compromised, Frechette said. For instance, APB was able to reduce quickly the amount of salt in its broccoli-cheddar soup by 28 percent to about 900 milligrams of sodium per 12-ounce serving because the flavor held up, he noted. However, its No. 1 best seller, chicken noodle, will remain as is.

“We’re not going to mess with that,” he said. “We’ll provide other options for guests who are looking for reduced-sodium items.”

Such substitutions have forced the chain to raise menu prices, but guests seem willing to pay for what they perceive as more healthful, quality fare, he said.

“We think our customers are willing to pay more for quality food,” Frechette said. “Even though we took the sandwich prices up 10 cents, we didn’t get any negative feedback on the increase. The feedback was that it was a better product.”

Milford, Conn.-based Subway is planning to unveil sodium-reduced items in its U.S. stores, although officials would not elaborate on what they are or when they would be available.

“It definitely is a challenging process,” said Lanette Kovachi, Subway’s corporate dietitian. “There is a lot that goes into it. Our R&D team is working closely with our individual manufacturers to come up with products that still taste really good.

“Right now we have a lot of things that are in the research phase,” she continued. “We are trying to determine the level we can go down to. There are so many components that go into a sandwich—one of our meats may be at one level, but the bread may be at another.”

Kovachi also noted that safety is a primary concern given that sodium acts as a preservative in deli meats.

Of taste tests conducted on the new items, she said, “It has been very promising.”

“People could not tell the difference,” she said, “and that is giving the company confidence to keep moving forward.”

Subway in the past three years has lowered salt content in 10 menu items in Europe, including its turkey, ham, roast beef, chicken, meatball and steak subs, Kovachi said. She noted that such progress is easier overseas because there are a smaller number of stores and manufacturers, and because European consumers are more accepting.

“They were more aware of the impact of sodium on health and were asking for lower-sodium products,” she said. “There’s been a lot of awareness over there through different health organizations and the media.”

At Uno Chicago Grill, the process of reducing sodium has been more time-consuming than costly, said Frank Guidara, president and chief executive of the 165-unit casual-dining chain.

“[Eliminating] trans fat was more costly than reducing sodium,” he said. “With this, we’re constantly working on getting the right blend of herbs and spices. It can take a while before you get it just right.”

He said the company is now working to reduce sodium in its foods by 10 percent, but it could take years to accomplish. He added that Uno had already reduced salt by 10 percent before joining the NSRI task force.

“We agree with New York City,” he said. “But if you change the recipe by dropping sodium 50 percent, I don’t care what you do—it will change the flavor, and people will say they don’t like it. If it is done gradually, the customer will be satisfied.”

Though Guidara is an advocate of providing healthful choices at his restaurants, he said sodium reduction should remain a voluntary choice rather than a legislated one.

“The industry is still caught up in the worst economy we’ve seen, and we’ve got a lot of things we need to be working on, like staying in business for one,” he said. “The government should focus on getting people back to work. There are good people in this industry who care about the consumer and will do the right thing for them. We don’t need more pressure from anybody.”—[email protected]