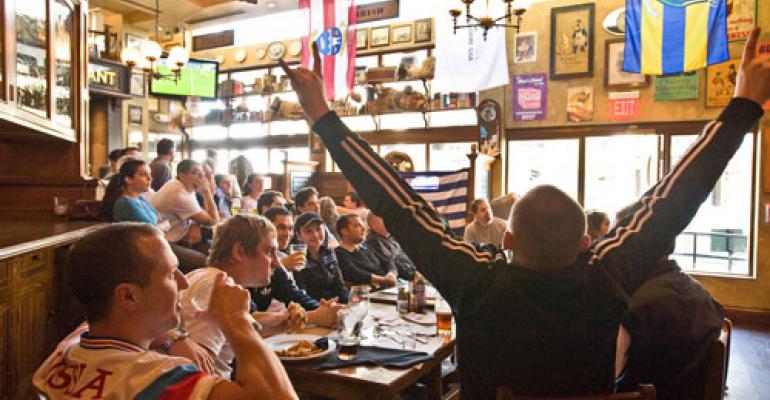 As the 2010 World Cup kicked off Friday with a 1-1 tie between Mexico and host nation South Africa, restaurants across the United States opened early to welcome soccer-crazy European expatriates and casual American fans looking for an energetic scene.

British research firm Initiative has predicted that this year’s World Cup will attract record viewership worldwide, with an average audience of 125 million people per match, and that the United States’ attention to the quadrennial tournament will increase from 2006.

As such, restaurants have ample opportunities to pitch themselves to new customers and to drive incremental revenue by opening at odd hours for live broadcasts. But operators who cater to soccer fans year-round point out that careful planning and execution are necessary to reach World Cup sales goals.

“The soccer fan has very high expectations, and if you flub it once it is really hard to get back,” said John Piccirillo, director of marketing and development for 13-unit Fadó Irish Pubs. “Think of the World Cup more as a private-party [opportunity], and think of all the details that make a private party great. It’s a discerning crowd. They’re great, but they can be cranky if you’re off, and now we’re talking about international affinity and people cheering their home countries.”

For sports bars around the country, especially ones carrying an English- or Irish-pub theme, the World Cup accounts for huge swells in traffic.

Piccirillo of Atlanta-based Fadó said the tournament is a “massive draw” that brings in more traffic than even St. Patrick’s Day. High hopes for the American team and overall growth in soccer’s popularity should drive even more people to the pubs this year, he added.

“Interest in soccer ratchets up every year,” Piccirillo said. “There’s more interest this year than there’s ever been. The U.S. is a good, big team this year, and Major League Soccer has gotten bigger.”

He added that Fadó shows international soccer in its pubs 200 days a year, mostly from the highly competitive English Premier League and the UEFA Champions League in Europe. The brand invests and cultivates a soccer following not only by showing games throughout the year, but keeping chatter about the sport going every day on its Twitter and Facebook pages.

For the World Cup, Fadó is selling bundled meals for the new breakfast and lunch opportunities presented by games’ early start times. The chain also will run online fantasy leagues and tournament brackets, and it has a partnership with USA Soccer in which its servers and guests would take pictures of World Cup action at Fadó’s pubs during Saturday’s tilt between England and the United States to be published on USA Soccer’s website.

It’s this constant attention to being a soccer destination that makes the World Cup a high-stress, high-reward time for Fadó every four years, Piccirillo said.

“It’s such an important part of what we do, that when we budgeted for 2010, we put an aggressive budget against it,” he said. “It’s still a big number to hit. Doing sports the right way is expensive. … [World Cup sales] will be incremental, but it’s the payoff for the last four years we’ve been investing in local MLS teams and the EPL. We’ve been working nonstop the past six months, upgrading TVs and audio, having additional pint glasses and food, and hiring additional staff so that we can maximize our benefit.”

“If you’re taking a run at the World Cup, do the basics really well,” he said. “Open a half hour before the earliest game time, and make sure TVs and sound are working. In terms of service, get things out in an expedited manner, because fans are going to order and want it quick so they can watch the game.”

Elsewhere, chain and independent bars are working to capitalize on World Cup-related business.

Hooters not only will host World Cup watch parties, but the chain also opened its second location in South Africa last week, in Johannesburg.

In Chicago, Mother Hubbard’s will open at 6:30 a.m. for scheduled matches, while Luxbar is selling $30 World Cup Buckets containing a beer each from the United States, Germany, Mexico, the Netherlands, England and Italy. Meanwhile, in Boston, Jerry Remy’s Sports Bar & Grill is offering 32 specialty shots for the World Cup’s 32 competing nations for $5. Highlights include the “Spring Break,” which is a shot of Patron in honor of Mexico and a shot of Stars & Stripes bourbon for the United States.

McDonald’s, the official restaurant of the World Cup since 1994, has promotions running in dozens of countries, including the United States with its “Taste the Glory” campaign. Customers can peel game pieces off Big Macs and Egg McMuffins to win instant prizes or find special codes for EA’s “2010 FIFA World Cup South Africa” online game. Prizes include the video game and game consoles as well as tickets to the match between the United States and Brazil, which will take place in August in New York.

“Customers expect McDonald’s to sponsor the world’s biggest sporting event, and they want us to connect them to the excitement of this global competition,” said Don Thompson, the company’s president and chief operating officer. “It’s a perfect fit for us because we are truly a local business located in every corner of the world.”

Pollo Campero, a global quick-service chicken restaurant with 50 locations in the United States, will sell two different World Cup promotional cups for $1.99 each.

Pizza Patrón, a 100-unit pizza chain marketed heavily to Hispanic customers in the United States, is holding a “Fútbol-Gana” online sweepstakes with a grand prize of one of four 50-inch home theater systems. To spur participation in the contest, Pizza Patrón began handing out free posters of the World Cup schedule that also contained coupons and a secret code to enter at www.pizzapatron.com. That code also is available on the brand’s Facebook and Twitter pages, or on a game card available at any Pizza Patrón in the United States.

And SushiSamba, which has units in Chicago, New York, Miami and Las Vegas, will host several watch parties and offer specials throughout the World Cup. Because Brazilian culture is one of its major influences, SushiSamba will go all out with samba dancers and drummers and pitchers of Leblon Caipiriñhas during Brazil’s matches. The chain also will serve $7 soccer-theme cocktails.

Even as another chain, ESPN Zone, announced significant closures involving five locations across the country, its parent company said it would launch special food trucks, carrying big screen TVs broadcasting live tournament games, in Los Angeles and New York to tie in to the World Cup.