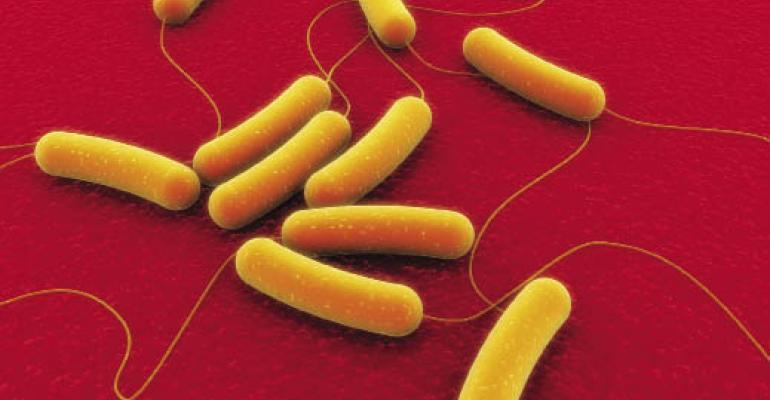 Even as legislative efforts to improve the safety of the nation’s food supply remain stalled in  Congress, scientists are seeking better detection methods for  deadly pathogens that could help restaurant operators better  ensure the safety of their menu items.

Researchers from Purdue  University in West Lafayette, Ind., in August said infrared spectroscopy can detect E. coli faster than current testing methods and can reduce the length of investigations into outbreaks by days.

Lisa Mauer, an associate  professor of food science, detected E. coli in ground beef in one hour using Fourier transform infrared spectroscopy. She said that compares with 48 hours  required for conventional plating technology, which requires culturing cells in a laboratory.

Mauer, whose findings were reported in the August issue of the Journal of Food Science, used two methods for separating bacteria from ground beef for testing. An antibody-capture method, which binds bacteria to antibodies attached to magnetic beads, gave results in four hours. A filtration method gave results in about an hour.

Mauer told Nation’s Restaurant News that infrared spectroscopy instrumentation has been commercially available for decades and is found in most  forensic laboratories and state departments of health. She  noted that Dynabeads, an  antibody capture system, is also commercially available and is an approved method for detection.

It was the combination of  infrared spectroscopy and  Dynabeads that resulted in “a more rapid detection system,” Mauer explained. She added, “I don’t think it would take long for the application to be widely used after proven viable through  additional outside lab testing.”

Mauer’s study was funded by the U.S. Department of Agriculture Research Service and the Purdue Center for Food Safety Engineering.

For instance, the USDA’s Food Safety & Inspection Service  announced Aug. 6 that Valley Meat Co. of Modesto, Calif., was recalling approximately one  million pounds of frozen ground beef in Arizona, California,  Nevada, Oregon and Washington because the product was linked to a cluster of seven E. coli O157:H7 illnesses in California.

Also in August, Cargill Meat Solutions Corp. of Wyalusing, Pa., recalled 8,500 pounds of ground beef with links to a  cluster of E. coli O26 illnesses in Maine and New York.

Though not as well-publicized as E. coli O157:H7, the O26 strain also can lead to  serious illness and, in extreme cases, kidney failure and death. While manufacturers and public health officials are required by law to test for the presence of the O157:H7 strain in ground beef, the current federal rules do not require testing for several other potentially toxic forms of E. coli.

Bill Marler, an attorney with Seattle-based Marler Clark specializing in foodborne illness cases, has petitioned federal  authorities to change those rules since 2007.

“The USDA and beef industry know well that there are at least six additional strains of shiga  toxin producing E. coli — O45, O111, O121, O145, O103 and O26 — that are highly dangerous to humans and should not exist in food,” Marler recently wrote on his blog.

Meat producers, however, said in a statement to USDA Secretary Tom Vilsack that “designating non-O157:H7 shiga toxin-producing Escherichia coli (STEC) as adulterants will result in a regulatory program that will do more harm than good.” The American Meat Institute, a Washington, D.C.-based trade group, said non-O157:H7 STECs in beef products are not a public health emergency and said the USDA should instead focus on prevention methods.