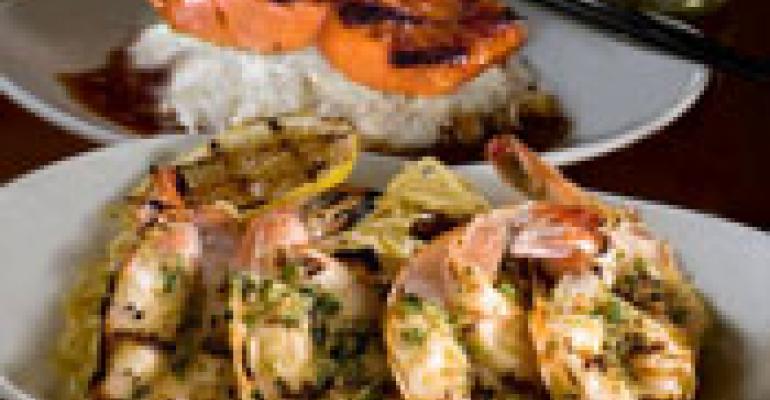 The company said it has been testing the grill menu during the past year.

“The Chinese cooking tradition is possibly the oldest and richest in the world and like all cultures, the Chinese learned to cook first on an open flame,” said Laura Cherry, director of public relations for the chain. “Today, Chinese grilling is often associated with street food where vendors serve grilled breads, meat, fish, fruit, etc. We traveled to China to discover the secrets of Chinese grilling and brought them back to P.F. Chang’s.”

The grill menu includes Chang's Sichuan Chicken Flatbread, $7, which is Cherry described as an updated Chinese scallion pancake served with sliced Sichuan-marinated Chicken and melted cheese along with a side of citrus-mustard slaw and a tangy dipping sauce.

“We’ve updated the classic Chinese scallion pancake and serve it grilled with sliced Sichuan-marinated chicken, layered with melted cheese and a side of creamy citrus mustard slaw and a tangy dipping sauce,” Cherry explained.

The Citrus Soy Wild Salmon, $17, is made with line-caught Alaskan salmon seasoned with lemon-wasabi oil and served with citrus soy sauce and steamed rice.

“We are currently developing new recipes that will be added to the grill menu as we move forward,” she said.

“The best part is you never have to feel guilty about eating dessert — our guests like to finish the meal with something indulgent, but often a full-size dessert is too much,” Cherry said. “The Minis give our guests the option to indulge in something sweet that isn’t overwhelming.”