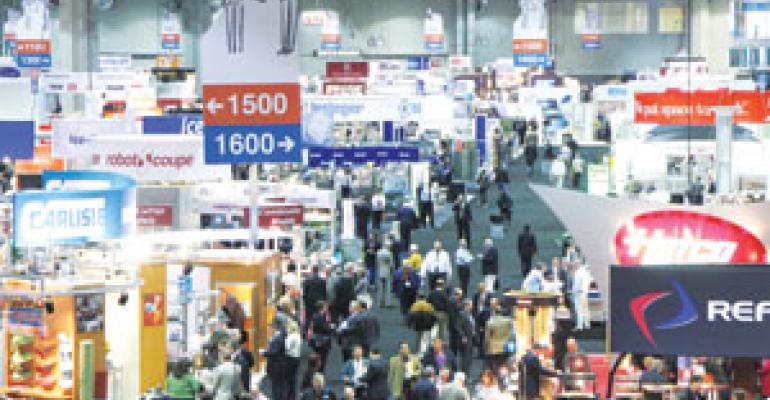 Operators arm themselves with technology, innovation

Even the darkest days hold glimmers of optimism and opportunities from which operators can find inspiration, and that held true for some attendees of The NAFEM Show 2009 in Orlando, Fla.

Industry professionals who made it to the Orange County Convention Center Feb. 5-7 had a chance to kick the tires of cutting-edge foodservice equipment and learn from wise heads how to think innovatively. They also learned about ways to operate more sustainably and constructive methods to move forward in a sputtering economy.

“This year, I had a feeling it was all about business,” said Dean A. Wright, director of dining services at Brigham Young University in Provo, Utah.

“The poor economy may have kept away people who were just lookers,” he said, “but I don’t think it kept away decision makers.”

Also exploring the exhibit floor was Aftan Romanczak, director of research and development, purchasing and quality assurance for Steak-Out Franchising Inc., a meal delivery concept based in Norcross, Ga., with 60-odd units.

“The economy is in the back of peoples’ minds, but they still have to do business,” Romanczak said.

This edition of the Chicago-based North American Association of Food Equipment Manufacturers’ biennial conclave marked the debut of a new product gallery called “What’s Hot! What’s Cool!” With nearly 80 innovative equipment pieces in one area, it gave attendees a time-efficient and step-saving way to see a lot of items.

Among the pieces on display were a compact brick oven that sits on a counter-top, a food cabinet that holds in heat with a curtain of air and a “smart” kitchen ventilation fan that self-adjusts its speed to match the heat of the cooking line, thus reducing energy usage.

Other noteworthy finds at the show included a combination oven-steamer that automatically dissolves lime scale buildup from its heating elements, a highly efficient fryer that produces the same amount of food as a conventional fryer but uses 40 percent less oil, and a speedy conveyor toaster that cooks with a mix of infrared and convection heat.

In a NAFEM Show ‘09 educational session on sustainability, spotlight speaker Gary Hirshberg, chairman, president and “CE-Yo” of yogurt maker Stonyfield Farm, discussed the growing pressures on water, land and agricultural resources that threaten to disrupt global business. As remedies, he outlined a range of sustainable measures his company supports, including converting farm animal waste into renewable energy and powering buildings with solar energy.

In Hirshberg’s amen corner at the session was first-time NAFEM attendee Vaughan Lazar, president and co-founder of Pizza Fusion, a 17-unit chain based in Fort Lauderdale, Fla., known for its own efforts in recycling and energy conservation.

“That was the most important educational session they could have held because we, as chain operators, owe it to our customers to encourage manufacturers to make more efficient equipment,” Lazar said.

Although final attendance figures had not yet been compiled, early indications suggested this show was better attended than might have been expected.

“I’m very pleased with the way it went,” said Steven R. Follett, chair of the NAFEM trade show advisory council and president and chief executive of Follett Corp. of East-on, Pa. “We ended up with probably 5 percent fewer attendees than last time, which is tremendous given where the economy is, and 18 percent more end users than last time. We actually sold more booth-space square footage in this show than in Atlanta.”