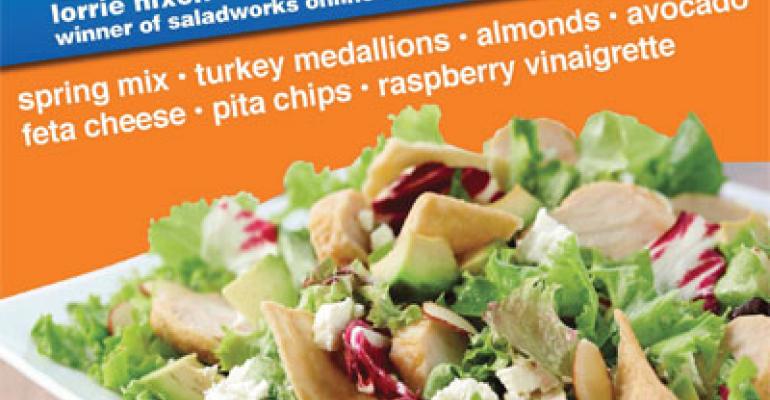 There was a time when saying that a menu item was good for you was the kiss of death at restaurants.

But that’s no longer the case, at least for 101-unit Saladworks, where highlighting the nutritional powerhouses on its menu both engaged customers and boosted sales.

The chain launched its True Nutrition campaign last year to tap into a growing awareness of food with nutritional compounds, often referred to as “superfoods.”

“All of a sudden, we started to hear [from customers], ‘What’s good for me in this salad?’” said Paul Steck, president of the Conshohocken, Pa.-based chain.

Customers wanted to know specifically how each item in the salad was going to help them live healthier lives, he added.

Many restaurantgoers literally want to know what’s in it for them when they’re deciding what to eat, whether they want the “good” monounsaturated fat of avocados or olive oil, the fiber of chickpeas, oatmeal and beans, or the antioxidants of brightly colored produce.

So Saladworks added 17 new toppings to its salad offerings and put together a brochure explaining that artichokes aid digestion and are good for the heart, that sun-dried tomatoes contain 12 times the lycopene of raw ones, and that sunflower seeds have fiber and vitamin E.

Altogether they described the qualities of more than 30 ingredients.

“We were flying through these tri-fold, three-page things,” Steck said of the brochures.
Part of the promotion was a contest held through Facebook and other social media, asking customers to come up with their own salad creations.

“We got tens of thousands of salad entries,” Steck said. “I was shocked.”

But it turned out to be great research that taught them that there were geographic and demographic differences in what customers wanted in their salads.

“We couldn’t find an entry from California that didn’t have an avocado in it,” he said. “We started seeing fruit coming from women — strawberries or currants or grapes.”

The winners of the contest — who had developed salads that fit into good demographic patterns and that had good visual and textural appeal — had their pictures and their salads promoted as limited-time offerings.

“It’s been a great campaign for us,” Steck said. “It’s been the only marketing that we’ve done in the past 12 months, and we’re up by 3.5 percent [in sales] over the prior year.

“It’s classic marketing,” he added. “Talk to your customers, a light bulb goes off, and you run with it.”