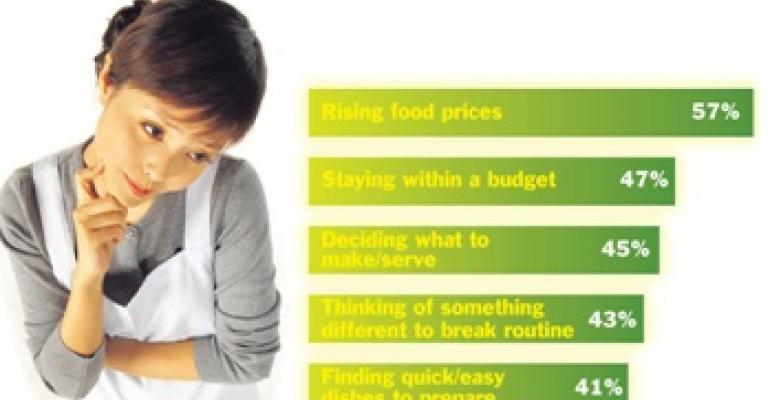 NPD: Restaurants should be reaching out to modern moms

Though operators have been trying to tap the lucrative mom market for years, most don’t really know what today’s moms want or how best to communicate with them, according to The NPD Group.

The crux of the problem is that mothers vary widely in their concerns, making it hard to pigeonhole the group into a tidy demographic, NPD found through research conducted in March and recently released in its “The Moms Report.” The report provides insight into the challenges moms face in raising their children and feeding their families during these difficult economic times.

“Understanding what moms are struggling with is key,” said Dori Hickey, director of product management, foodservice at NPD, a Port Washington, N.Y.-based market research firm. “Their attitudes can guide their behavior.”

Among the 35 million households with a mom and child under the age of 18, there is no single state of mom-ness, NPD found. There are new moms, or those with kids under the age of 6, and experienced moms, or those with at least one child over the age of 6. Three-fourths of moms are married, and three out of 10 moms have a college degree. More than one-quarter of moms with kids under 18 are over age 45. Though the number of moms entering the workforce has hit a plateau after decades of steadily increasing, NPD found that more than seven out of 10 moms work full or part time.

Operators can’t just say they are targeting moms, they need to decide which kind of mom they are going after, Hickey said. “It’s an important consideration to hone a bit more on that specific target.”

When it comes to feeding their families, moms worry most about the money it costs. The top concerns for female heads of households with children under 18 are “rising food costs” and “staying within a budget,” NPD found. Beyond money, other big concerns included “deciding what to make or serve,” “thinking of something different to break the routine,” and “finding dishes that are quick and easy to prepare.”

Working moms and stay-at-home moms struggle with many of the same issues, but there are some notable differences, NPD found.

Stay-at-home moms are more concerned than moms-at-large about such issues as “getting my family to try new foods/beverages,” “having enough money to buy healthy foods,” and “ensuring my family eats healthy, balanced meals and snacks.”

Compared to all moms, working moms are more concerned about “lack of time to prepare meals,” according to the research.

“There are still some moms who think they could use some education,” Hickey said.

Moms get their nutrition information from a variety of sources, NPD found. Among them are books, cookbooks, print and online magazines, tips printed on product packages, websites, TV or cable shows, and friends and family members. While college-educated and noncollege-educated moms both turned to all these sources, moms with a degree were significantly more likely to seek out information from magazines and websites than moms without one.

“With the recessionary economy, moms definitely want two things,” said parenting guru Stacy DeBroff, chief executive of . “They want value, but they are not willing to give up nutrition. People want to find a balance.”

This is a big challenge for fast-food restaurants, DeBroff said, adding, “The better the value at fast food, the lower the nutrition value.”

In recent years, however, some of the industry’s biggest fast-food chains have decided that Mom does know best and have made notable efforts to listen to her.

In 2006, McDonald’s launched The Global Mom’s Panel to advise the chain on such issues as the company’s balanced active-lifestyle initiative, communications with families and the well-being of children. At the same time, the chain also introduced the Moms’ Quality Correspondent, a mom-centered program designed to make the chain’s food quality and safety more transparent. While the global group is not currently active, a spokeswoman said, McDonald’s has shifted to a more localized effort.

Similarly in 2006, Louisville, Ky.-based KFC launched its Moms Matter! Advisory Board, a group of everyday and expert moms charged with counseling the chicken chain on everything from trends that affect families to new product ideas.

Despite such efforts, mom experts say there’s still a disconnect between restaurants and moms.

One reason the conversation is stalled, according to Mom, is because moms have gone digital and restaurants have not.

Often called “digital moms,” today’s moms are increasingly using technology to socialize, get information and keep in touch with their busy families. Most moms are using text messaging, and the majority of texts to moms are initiated by their children, according to BSM Media, a research firm founded by marketing and mom expert Maria Bailey.

Such conservativeness is costing restaurants, Bailey said. For example, they are missing a huge opportunity to reach Mom at the very moment when she is trying to decide what to do for dinner. Sixty percent of all moms do not know what they are cooking for dinner at 4 p.m., according to BSM Media. At that time of day moms aren’t likely to be watching TV or reading a magazine, where they might typically encounter a traditional restaurant ad or promotion. They are more likely to be at work in front of a computer or in the car picking up the kids, Bailey said.

“[Restaurants] need to be where she is,” Bailey said. “They should be engaging mom bloggers. They should be on Twitter at 4 o’-clock in the afternoon pushing out that promotion.”

Among the high-tech ideas Bailey said restaurants should consider is enabling moms to preorder takeout or make reservations via text message. She also suggests restaurants figure out how to gather each family member’s order via text so Mom doesn’t have to.

“[Restaurants should] spend less on advertising and increase [their] spend on social media,” she said.

In addition to engaging much more in social media, DeBroff believes that restaurants need to engage moms as “brand ambassadors” who will spread the good word for them. But not just any mom will do for the job.

“They need to get influential moms,” DeBroff said. “The more credible the mom speaking is, the more effective the message.”