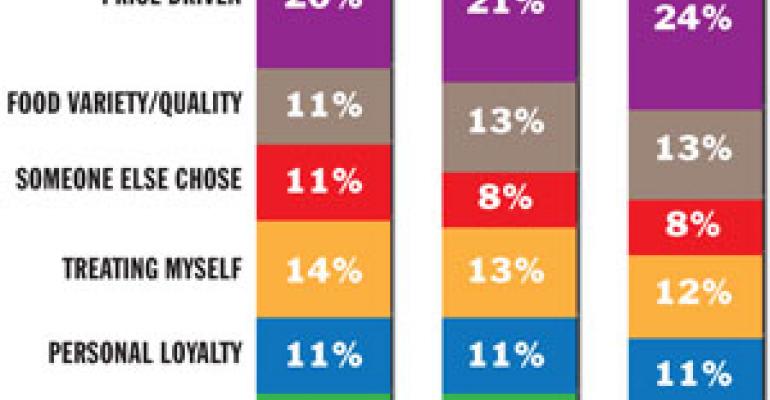 While nearly all other age groups have decreased their per-capita visits to restaurants in the last five years, boomers—roughly defined as adults born between 1946 and 1964—have significantly increased their visits, according to Port Washington, N.Y.-based NPD. With the Bureau of Labor Statistics forecasting that the size of this group will grow at three times the rate of the rest of the population over the next decade, NPD officials say that boomers will continue to be a dining-out force that operators cannot afford to ignore.

“I don’t think people are aware that this group is supporting the industry’s traffic,” said NPD analyst Bonnie Riggs. “They’re going to be around for a while, so we need to pay attention to them.”

When baby boomers dine out they visit a variety of restaurant categories, NPD found. While they patronize many of the same categories as the general population, boomers have an above-average usage of midscale places with varied menus, food and drug stores, and midscale family-style restaurants, according to the data.

While price is a concern, particularly during a recession, baby boomers don’t visit a restaurant just because it’s cheap.

In the 12 months ended in October, just 21 percent of baby boomers’ restaurant visits were because of deals. By comparison, 22 percent of visits made by those younger than 50 were influenced by deals, and 26 percent made by those 65 and older were deal-driven.

“Clearly, foods and beverages with relatively high dependence on those over 55 years of age will be those enjoying strong growth going forward,” Riggs said.

Though these foods and beverages are important to this group now, continuing physical changes will influence the demand for various products and services in the future, Riggs noted. As they age, boomers will seek out more low-fat, low-sodium, low-sugar and higher-fiber foods and beverages. However, Riggs said, that does not mean they will be willing to sacrifice the taste and flavor of food.

Other reasons baby boomers visited particular restaurants included “restaurant exploration” and “food variety and quality,” NPD found. In addition, as diners age factors such as “personal loyalty,” “treating myself” and “need it now” become far less important than they are to younger patrons.

Restaurant marketers have historically targeted younger consumers, who have tended to be the most frequent restaurant visitors. But as the economy has increased competition for any type of consumer and the heads of those dining in restaurants become grayer each day, many marketers have started to turn their attention to baby boomers.

Boomers are a prime target for Calabasas Hills, Calif.-based The Cheesecake Factory. To bring them in more frequently, the more than 145-unit chain has been rolling out value-added programs and new products. For example, in December, the chain offered customers a free $25 gift card with the purchase of a $25 holiday bear and introduced a new cheesecake flavor.

“[Baby boomers] are a very important and lucrative target for The Cheesecake Factory,” said senior vice president and chief marketing officer Mark Mears. “[We’re] finding it’s a nice draw to get people to come back for incremental visits.”

To continue to attract this crowd, Mears said, The Cheesecake Factory “has a lot of things in the works,” including a new special menu featuring eight items priced between $11 and $14.

In August, Los Angeles-based Kabuki Japanese Restaurants, a casual-dining chain that operates 13 locations in Southern California, Arizona and Nevada, rolled out its Red Mask Club, a new frequent-diner program. Although designed to reward all of the chain’s regular customers by letting them earn points for each visit and then redeem them for cash-value gift certificates, baby boomers are certainly a target market.

“A high number of our guests are in the baby boomer category,” said marketing director Young Kim, noting that while all of the chain’s restaurants have experienced negative sales versus a year ago, those locations that have the heaviest boomer traffic had less negative—only single-digit—declines. “Now we are giving them an incentive to come back.”

After just two months, nearly 15,000 customers were enrolled in the Red Mask Club, and many of those members were baby boomers, Kim said.

“I don’t mind giving away $25 or a birthday meal,” Kim said of one of the loyalty program’s perks. “We are getting really good returns. … It makes sense for them and for us.”

While fresh deals and new loyalty programs are working for some, to keep baby boomers coming back to Good News Cafe in Woodbury, Conn., owner Carole Peck is doing what she’s done for the past 15 years: offering a lot of healthful vegetarian choices at a good value and remaining heavily involved in the local community.

“I’ve always had a lot of vegetarian choices…and a lot of baby boomers want to eat healthy,” Peck said.

Although most customers come to Good News Cafe for its menu of “modern farm cuisine,” which changes seasonally and typically features about 45 items, Peck said working with local farmers and being involved in various charity events also drives business.

“A lot of people recognize that and come in and support us for that reason,” she said.

No matter what the approach, Riggs said operators who focus on older adults are bound to benefit.

“As weak as the industry is today, it would be even weaker if not for the support obtained from baby boomers and senior citizens,” Riggs said. “It pays for operators to pay attention to this group, not only currently but in the future.”