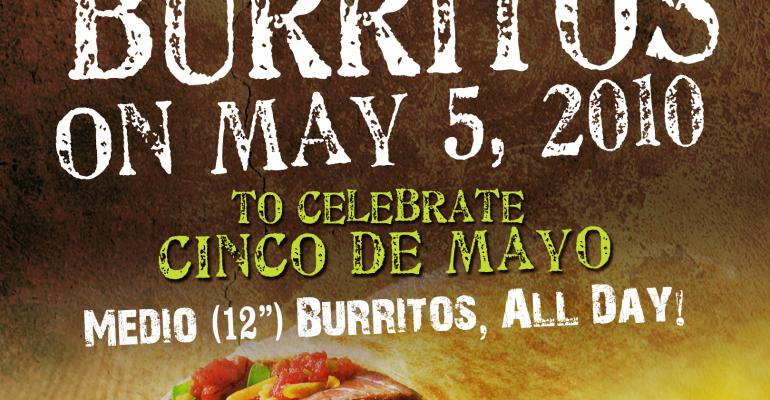 Mexican restaurants don’t need much help ringing up sales on May 5, even in a fairly underdeveloped market like Canada, said Norm Pickering, director of marketing for Mississauga, Ontario-based Extreme Brandz, franchisor of 25-unit Mucho Burrito.

“People are in the right mood on Cinco de Mayo, and we want to make sure we’re top of mind on that day,” Pickering said.

And he and his fellow officers had plenty to celebrate this year, as Mucho Burrito’s same-store sales compared with May 5, 2009, increased 47 percent systemwide, thanks to a repeat of last year’s deal and a new contest.

This past Cinco de Mayo, the fast-casual brand reprised its 2009 promotion of $5 burritos and bounce-back coupons for members of its e-mail club and its social-media followers. That promotion had helped some units triple their average daily sales on the holiday. Mucho Burrito also added a twist in 2010: a sweepstakes for $20,000  in prizes, including a $2,500 travel voucher, Mucho Burrito gift cards, and free food and merchandise.

“Each year we want to enhance the experience and bring other parties to the table,” Pickering said. “We would like to get more community engagement through public relations and local activity around the program, and that comes with time and with scale. But the franchisees were very happy; it was a very busy day.”

The offer got the online traction Mucho Burrito had been looking for, he added. From the April 15 launch of the www.muchocincodemayo.com microsite and a special tab on the brand’s Facebook page through the middle of May, 2,600 people had entered the sweepstakes, with nearly 1,500 of those opting in to the “Johnny Mucho” e-mail club.

The promotion worked out to about 60 new e-mail club members per store, plus several hundred new followers on Twitter and Facebook, in addition to the 47-percent jump in Cinco de Mayo sales, creating a favorable return on investment, he added.

“I like the fact that from a digital-media standpoint, the cost to invest in the microsite, put the prizes together and build out the social-media presence was a nominal investment for the return we got,” Pickering said. “We invested about $35,000, and a lot of that went to direct mail and radio. That’s the beauty of Facebook and a microsite.”

Sam Rubin, “chief grub” for Boca Raton, Fla.-based Restaurant eMarketing, said the campaign’s streamlined efforts for sharing — e-mail offers had links to Mucho Burrito’s social-media pages, where the offers could be distributed  to friends of friends with a few clicks — contributed to its success.

Engaging that kind of digital word-of-mouth is as simple as asking people to spread the news, he added.

“We’re just encouraging people to click over here to forward [the promotion] to other people, and you’d be surprised how many people take the time to do that,” Rubin said. “Don’t be afraid to ask. If these people like your brand, you’re engaging them to talk about it. Worst case, if you ask them to post something and they don’t do it, you didn’t lose anything.”

A key differentiating point for SocialGrub was to make the offer easy to find, print out and share, Rubin said. Promoting the Cinco de Mayo sweepstakes with the microsite and with its own dedicated tab on Mucho Burrito’s Facebook page facilitated that.

Another chain might cause confusion by distributing a coupon via a picture on Twitter, for instance, meaning a fan would have to go searching through the brand’s entire feed to find the one post containing the coupon.

“When people start engaging with that offer by commenting on the picture of the coupon, then it makes it difficult for me to print it out as an offer,” Rubin added. “Pushing people to a separate Web page or tab for  a promotion is really more important now.”

That practice also keeps a restaurant from having to ask permission to post things directly to a person’s Facebook page, he said, distancing the brand from appearing to not value their customers’ privacy. If a restaurant’s fans know they can go to the restaurant’s page to find an offer, rather than sign up to have the brand contact them, participation remains robust.

“If you join something from a brand and it requires permission to post something to your wall, you’ll find an initial backlash,” Rubin said. “People will join to get what’s free, but when the brand starts invading their privacy, they’ll opt out heavily.”

Pickering and Mucho Burrito remain eager to keep a more genuine  conversation with their customers going.

“Ultimately, this promotion and platform let us remain true to our roots,” he said. “It all comes down to local-store marketing. We have about 8,000 people just in our e-mail database, and they’ve opted in and want to talk to us — and we want to hear from them.”