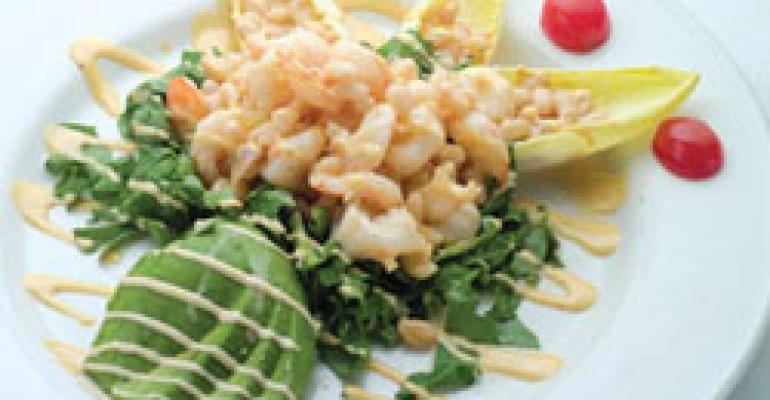 Poor beans: the subject of derision as a poor-man’s food, the butt of countless jokes involving the human digestive system, the victim of so many ill-conceived recipes by sanctimonious vegetarians.

But with a little finesse, beans can do more than add inexpensive heft to a dish, and despite their mixed reputation, most people like to eat them.

In spring and early summer, as heirloom beans come into season, some chefs treat beans like any other seasonal specialty.

“Before summer, everything is over,” he says, except for string beans which, believe it or not, are the same species—Phaseolus vulgaris—as most other beans, including kidneys, pintos, turtles and cranberries. Lima and fava beans are different species, however. So are soy, garbanzo and adzuki beans.

Riccioletti objects to the preparation of many beans in the United States, saying we take the notion of al dente a bit too far.

“We [Italians] like to think that when you press beans with your tongue to your palate, they disappear,” he says. “If you don’t cook them enough, you won’t be able to transform all of the starches [into simpler sugars] so they won’t be as sweet.”

For his Easter menu, Riccioletti is using Romano beans, also called Italian flat beans, which are a type of snap pea. He sautés them, without blanching, in garlic oil. Then he adds tomatoes, salt, pepper and some chile flakes. He serves them over rosemary-flavored chicken meatballs topped with a tomato-cream sauce.

Mary Dumont, the chef of Harvest in Cambridge, Mass., agrees that beans should be thoroughly cooked. She starts by soaking them overnight in cold water with a capful of vinegar, which she says helps keep the shells intact. Then she rinses the beans and slowly simmers them for two hours, adding a quart of cold liquid—water or stock, depending on the dish—to lower the temperature and help keep the cooking even.

For garbanzo beans, she says she likes to add a couple of oranges with cloves stuck in them, a flavor combination that she says goes well with that particular legume.

Dumont says that even after two hours of cooking, the skins of cannellini beans still have some crunch, so she serves them with braised dishes, such as her braised Kurobuta pork belly “BLT,” which also includes braised lettuce, sweet tomato confit and green-peppercorn jus.

For her George’s Bank monkfish, however, she uses Peruvian lima beans, which she says are larger than a quarter and white, so they have a dramatic visual appeal. She serves the monkfish with artichoke barigoule and smoked bacon.

“Fava beans are great in season,” she adds, “but they won’t have much flavor for another month or month and a half.”

Mike Fagnoni, chef and owner of Hawks in Granite Bay, Calif., uses mostly Italian butter beans, which are in season in late spring. “We’re waiting for the fresh ones to come back,” he says. In the meantime, they use dry ones from a nearby farm.

Even fresh, the beans take between 45 minutes and an hour to cook, says Fagnoni, who simmers them in vegetable broth with mirepoix, fennel and garlic. He thickens some of that broth with aïoli and uses that to coat the cooked beans. He uses a variety of Italian butter bean that is about three-quarters of an inch long and half an inch wide.

“It’s just got a little bit of tooth on the outer layer, and it’s really creamy inside,” he says.

To keep them from splitting, he doesn’t remove them from the liquid until they are completely cool.

“So once they’re done cooking, as they’re cool, we add some salt, lemon juice and olive oil,” Fagnoni says.

He serves them with halibut, grilled artichokes and an Italian salsa verde of capers, cornichons, shallots and olive oil. He adds a little arugula to the beans “just so it’s barely wilted.”

At Citrus at Social in Hollywood, Calif., chef de cuisine Rémi Lauvand uses large Greek gigantes beans, which are nearly an inch long. To get them tender, he soaks them in water for four to five hours and then cooks them sous-vide style with lamb jus at 170 degrees Fahrenheit for 24 hours.

“By cooking them that way, we do not break the skin. They just come out really plump,” he says. He serves them with a lamb shoulder that is roasted and then braised with either navy white beans or northern white beans.

“Basically, we cook the [lamb] stew until the beans fall apart,” he says.

The result is a light colored sauce to which he adds purée of sautéed onion and roasted jalapeño peppers. He finishes it off with parsley purée, which turns the sauce green.

He serves that with the gigantes.

Ben Pollinger, executive chef of Oceana in New York City, likes to sprout beans and add them to salads. He soaks mung, black urad and black garbanzo beans overnight. He drains them and puts them in stacks between several layers of cheesecloth in a shallow pan. He leaves them in a warm location and lets them sprout for two to five days, until the sprout is at least twice as long as the bean. That breaks down the complex carbohydrates, so that he only needs to blanch them for a few minutes to make them edible.

He served them last winter in a salad with diced apples, jícama, chiles, ginger, Thai mint, basil and macadamia nuts, which he shaved on a mandolin. That was all tossed in a vinaigrette of olive oil and banyuls vinegar and served in a hollowed out roasted Fuji apple, which he topped with water-cress, banyuls vinegar and olive oil. Although many chefs focus on using local, seasonal beans, Lee Gross, chef of the recently opened, mostly vegetarian Broadway East in New York City, swears by beans from the Japanese island of Hokkaido.

“If you want to get the most perfect, most nutrient-dense and delicious beans, go to Hokkaido,” Gross says.

He uses black Hokkaido soybeans in his oden, a type of soup, which he makes with braised daikon, kabocha squash, lotus root, yuzu and spicy sesame oil along with the black soy beans in a sweet miso broth. He covers the soup bowl with yuba, or tofu skin, so when it’s served at the table and the skin is broken, the aroma hits the diners all at once.

He also used French lentils in a winter Indonesian curry with tempeh, cauliflower, carrot and burdock. He says the French lentil base is unexpected in a curry, and it’s not “an overt abuse of piles of beans” that have plagued some vegetarian restaurants.

The lentils “are delicate and hold their shape very lightly,” he says. They have enough heft for winter but, with a change in vegetables, would be suitable for summer.